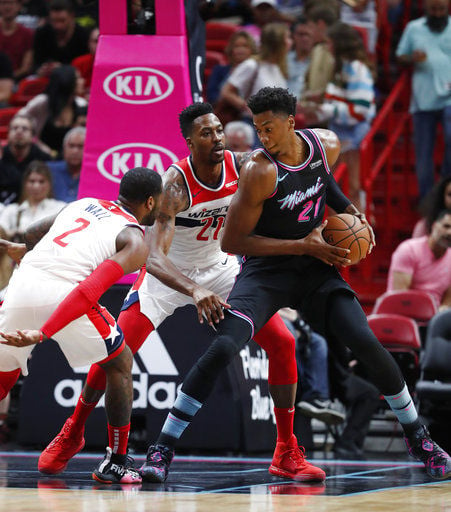 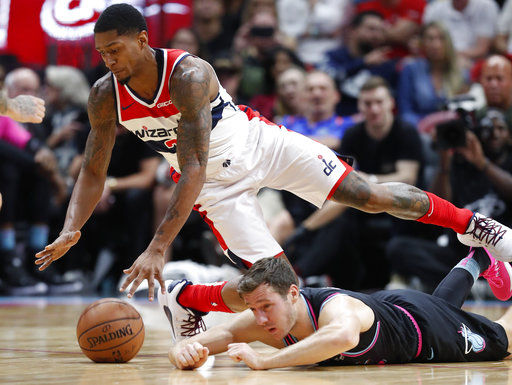 Washington Wizards guard Bradley Beal, above, and Miami Heat guard Goran Dragic battle for a loose ball during the first half of an NBA basketball game Saturday, Nov. 10, 2018, in Miami. (AP Photo/Wilfredo Lee) 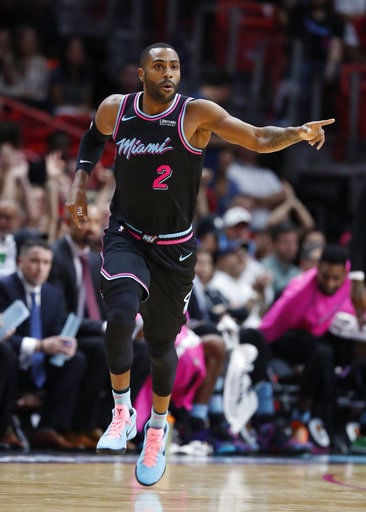 Miami Heat guard Wayne Ellington reacts after a 3-point shot during the first half of the team's NBA basketball game against the Washington Wizards, Saturday, Nov. 10, 2018, in Miami. (AP Photo/Wilfredo Lee) 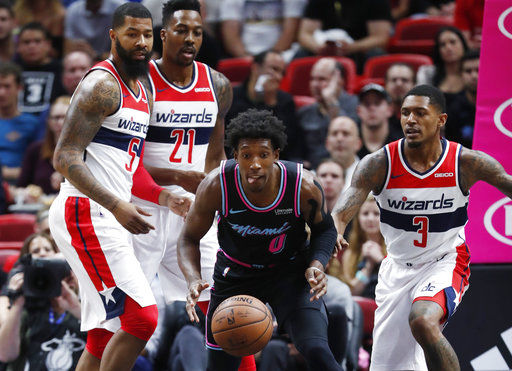 Washington Wizards guard Bradley Beal, above, and Miami Heat guard Goran Dragic battle for a loose ball during the first half of an NBA basketball game Saturday, Nov. 10, 2018, in Miami. (AP Photo/Wilfredo Lee)

Miami Heat guard Wayne Ellington reacts after a 3-point shot during the first half of the team's NBA basketball game against the Washington Wizards, Saturday, Nov. 10, 2018, in Miami. (AP Photo/Wilfredo Lee)

So they decided to do something about it.

Wall scored 28 points, he and Rivers each scored 10 in the pivotal fourth quarter and the Washington Wizards got a much-needed win by topping the Miami Heat 116-110 on Saturday night. The Wizards opened the fourth on a 31-12 run, with Wall and Rivers fueling most of that effort.

"It was probably one of our best games, how we played," Wizards coach Scott Brooks said. "We played a physical brand, we fought for one another and I thought we made timely passes and shots."

Jeff Green had 19 points and 10 rebounds for the Wizards. Rivers scored 18, as did Bradley Beal, and the Wizards won for only the third time in 12 games to start the season.

"You work hard all summer, throughout the season, to prepare yourself for those type of moments," Wall said. "Austin got into a great rhythm."

Washington opened the fourth on a 31-12 run, before the Heat trimmed what was as much as a 17-point deficit down considerably in the final minutes but never seriously threatened again. Dwight Howard finished with 11 points and 16 rebounds for the Wizards, who outrebounded Miami 48-38  the first time Washington won that stat battle all season.

The Wizards also got a boost at the foul line, shooting 28 for 38 there compared with 20 for 26 by Miami.

"We had moments where we competed defensively, and we had other moments where I didn't recognize our team," Heat coach Erik Spoelstra said.

The Heat were again without Dwyane Wade, who sat a third consecutive game after the birth of his daughter. Goran Dragic returned after missing Miami's last two games with right knee inflammation, but he struggled and shot 0 for 7 in 21 minutes.

Miami led 35-25 after one quarter and pushed its lead out to 12 early in the second, and couldn't finish. Washington was within three by halftime, two going into the fourth and took what was then its largest lead of the night  six points, 92-86  when Wall connected on a foul-line jumper to cap a 9-1 spurt that opened the fourth.

And that set the tone for the finish. A night after Washington trimmed a 25-point deficit down to one late but fell in Orlando, it finished the job in Miami.

"There shouldn't be any team that's more desperate than us," Ellington said.

Wizards: Washington evened the season-series with Miami at 1-1, with both clubs winning on the road. ... Even with the win, going back to last season and including the playoffs, the Wizards are just 8-22 in their last 30 games. ... Green made his first seven shots and finished 8 for 11. ... Howard had seven offensive rebounds.

Heat: Kelly Olynyk needed treatment throughout the day after getting kneed in the rib area by Indiana's Tyreke Evans on Friday night. He played but was limited to 13 minutes, scoring five points. ... This was the 20th home back-to-back in Heat history, and only the third time they dropped both ends of such a set.

Saturday completed the first back-to-back of the season for Washington  which still has 14 left to play. The Wizards are one of four teams playing 15 of the sets this season; no team has more. Miami has already finished three back-to-backs, ending two of them against Washington, and has only nine remaining.