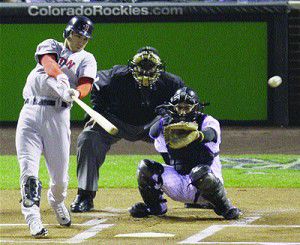 Boston Red Sox's Jacoby Ellsbury hits a lead-off double during the first inning in Game 4 of the World Series. <i>Associated?Press</i> 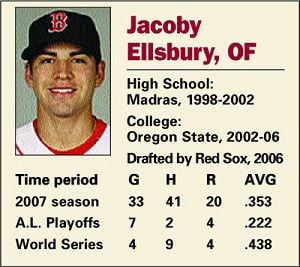 Boston Red Sox's Jacoby Ellsbury hits a lead-off double during the first inning in Game 4 of the World Series. <i>Associated?Press</i>

They celebrated a mile up on major league baseball's loftiest infield, sky high again, a repeat of that raucous night at old Busch Stadium in St. Louis a few years ago.

Boston is baseball's bully, the example other teams seek to emulate. "Damn Red Sox," anyone? Three years after they ended the Curse with their first title in 86 years, now the curse is on everyone else.

What a tale to tell. Those decades of frustration that left their faithful doubting if their day would ever come are distant memories, stored up in the attic with sepia-toned photos from the original Red Sox dynasty, which won five World Series titles from 1903-18.

On another night to remember back at Fenway Park, Faneuil Hall and all over New England, Boston became World Series champions for the second time in four years by beating the Colorado Rockies - flattening them - in a sweep that ended with a 4-3 victory Sunday night.

"Pretty darn heavy," Jon Lester said after lifting the trophy that all of baseball had sought since pitchers and catchers reported to Florida and Arizona last February.

Lester was one of the stars, a 23-year-old who overcame cancer, returned to the Red Sox and won the World Series finale by pitching 5 2-3 scoreless innings in his first start since Sept. 26.

There was Mike Lowell, the World Series MVP, who hit .400 with four RBIs, including a solo homer in the finale that pushed the lead to 3-0. There was baby-faced Jacoby Ellsbury, who led off the game with a double and scored the first run.

There was the old guard from 2004, Manny and Big Papi, Curt Schilling and Jason Varitek.

And there were new faces such as closer Jonathan Papelbon, who got the final five outs to preserve the slim lead, then threw his glove up so high it seemed as if a gusher had splashed it toward the heavens.

In the clubhouse, players wore blue goggles to keep the celebration spray out of their eyes. Daisuke Matsuzaka, who in Game 3 became the first Japanese pitcher with a Series win, bowed out on the field, celebrating with his own native style.

They came together from several corners of the world to represent a city that obsesses over its baseball like no other, and in a contest between Boston lobster and Colorado beef, the shellfish left the meat charred and scarred. Colorado, fourth in the NL West in mid-September, had a remarkable run of 21 wins in 22 games to reach the Series for the first time. But after an eight-day layoff, the Rockies were rusted and got routed.

With the second-highest average in Series history behind the 1960 New York Yankees, Boston outhit them .333 to .218, outscored them 29-10. Maybe any of the four American League playoff teams would have swept any NL champion. Sure seemed that way.

Five players who could be the Arizona Wildcats' MVP this season