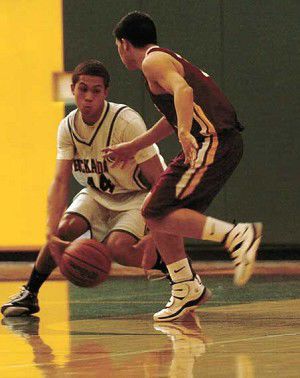 Pendleton's Anthony Bonifer steals the ball away from The Dalles-Wahtonka Eagle Indians earlier this week.<BR><I>Staff Photo by Brenna E. Chapman</i> 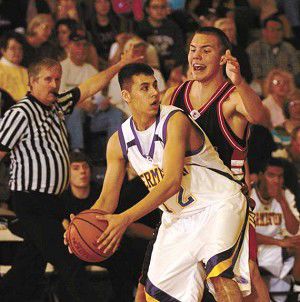 Hermiston's Bradley Irwin blocks his opponent during a game against Mt. View earlier this month.<BR><I>Staff Photo by Brenna E. Chapman</i>

Pendleton's Anthony Bonifer steals the ball away from The Dalles-Wahtonka Eagle Indians earlier this week.<BR><I>Staff Photo by Brenna E. Chapman</i>

Hermiston's Bradley Irwin blocks his opponent during a game against Mt. View earlier this month.<BR><I>Staff Photo by Brenna E. Chapman</i>

HERMISTON - Today's game will have a different feel from the first meeting between the Hermiston and Pendleton boys' basketball teams.

The most noticeable difference is in the starting lineup for the Bulldogs, which will be starting Brad Irwin, Cody Meeks and Cody Humphrey - all of whom did not play in the earlier loss to Pendleton.

"It's going to be a totally different lineup so we didn't even watch the game film," Pendleton coach Stu Clem said. "The guys we're going to be playing are a lot tougher and a big part of their team."

Each will add something different, with Humphrey causing havoc in the paint, Irwin drawing special attention from Spenser Sundin defensively and Meeks possibly the toughest defensive matchup on Hermiston's roster for the Bucks.

"We'll have our full lineup and we'll be at full strength," Hermiston coach Larry Usher said. He added Meeks should be well-rested after sitting out the Bulldogs' win against Madras with a sore knee.

But the other difference comes in respect to each team's postseason hopes. Hermiston went from dropping two of three in the loss to the Bucks to suddenly playing some of its best basketball of the season after sweeping a three-game road swing.

Pendleton, though, lost a heartbreaker against The Dalles-Wahtonka Tuesday, putting the Bucks in the tightest of corners. With two games left and two games behind Madras, Hermiston and the Eagle Indians, there is no room for error against the Bulldogs.

"(Tuesday) night was important too so it's one of those things," Clem said. "It's important to get on track and that's what we're trying to do. We talked about how athletics is about bouncing back and we're going to try and bounce back against Hermiston."

Playing a team with its back to the wall is a frightening proposition for Usher, who admitted anything can happen when one team has nothing else to lose.

"The worst thing that can happen in that situation is to play tight and play too controlled," he said. "One thing we've really stressed lately is every possession is very, very important and that each possession might be the last of the season because that could very well be the case."

Turnovers were a major factor in the first meeting as Pendleton's trap pressure harried the younger Bulldog players into miscues. That inexperience has been replaced by a conference slate's worth of seasoning and the addition of the three starters.

The other big difference was the play of Spenser Sundin, who caught fire against Hermiston from the paint and outside the arc. What Usher first thought was a defensive breakdown by his team turned out to be simply a surreal shooting night for the Bucks' most prolific scorer.

"Looking at that game and preparing for this game we executed the game plan pretty well," Usher said. "He hit a lot of contested threes and a lot of contested mid-range jumpers. That stuff we can't control. We just have to take care of the things we can control."

According to Clem, Sundin is streaking like few others in the conference have done all season. Over his last three games, the Bucks' senior guard has scored a combined 82 points and is challenging for the IMC scoring title at close to 24 points per game.

But for the Bucks to win, they will need to use their athleticism on the floor to keep the tempo moving and create easy buckets. Devon Polhamus was instrumental in that first meeting and likely he will have to do more of the same with Jonathan Kayembe playing as well as he has all season.