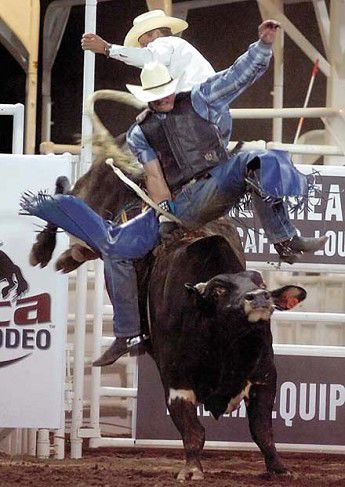 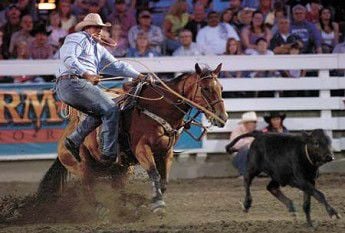 J. Cody Jones of Kelseyville, Calif., jumps from his horse on his way to a 9.1-second time in tie-down roping Wednesday at the Farm City Pro Rodeo in Hermiston.<BR><I>Staff photos by E.J. Harris</I>

J. Cody Jones of Kelseyville, Calif., jumps from his horse on his way to a 9.1-second time in tie-down roping Wednesday at the Farm City Pro Rodeo in Hermiston.<BR><I>Staff photos by E.J. Harris</I>

The 22nd Annual Farm-City Pro Rodeo sizzled out of the chutes and finished the night white hot, giving fans at the Wednesday night performance plenty of bang for their buck.

Ford's mark didn't last long, though as Tilden Hooper took the lead with an 83 before Payson, Utah, cowboy Jessy Davis won the night with an 84 on Corey and Horst's Starburst.

"I never had (been on Starburst), but my travelling partners had her before and they said she was a really good horse to have, especially at this rodeo," said Davis, who is off to rodeos in Montana and Idaho this week.

Davis was happy to have his season continue on the right path after an injury to his free arm shoulder derailed him early.

"I kind of had a late start," he said. "I had shoulder surgery so I had to sit out for six months. I got started first of July and I'm sitting 30th right now."

After some great runs in the timed events, roughstock stole the show again when bull riding sent fans home - or to the Chute 8 party tent - with smiles on their faces.

The event didn't get off to the best start but finished strong.

Jason Beck scored the first qualified ride with a 71, then five riders in a row got sent home with nothing but a nice round of applause.

Tyler Johnston and Sean Case got things going the right direction with a pair of 84's, though, and Shawn Hogg looked to have the round wrapped up when he covered Korkow Rodeo's Redneck for an 86.

But then Ardie Maier, of Timber Lake, S.D., held on for dear life as Korkow's Swamp Donkey spun from the chute and continued to kick frantically near the gate.

Maier was rewarded with a crowd-pleasing 91 that makes him the early favorite to win the rodeo. The arena record at the FCPR is a 92, last accomplished by Beau Hill in 2001.

"I did my part, I drew a good bull and stayed on so I did all I could do. Whatever everybody else does, you know I got my job done so I'm happy."

Jeremiah Peek got the better of a tough stable of calves with a 7.7 seconds run in tie down to take the night.

Then Cody Cassidy, of Donalda, Alberta, tied the night's fastest time in steer wrestling with a 4.9.

Paired with his 4.0 from the slack run earlier in the day, Cassidy moved into the average lead with an 8.9 that should remain competitive throughout the week.

"It was good, I don't know if it will pay the most," Cassidy said of his run. "It felt good, the last couple weeks have been a little slow."

Cassidy said he's not holding out hope for the average win, though.

"It won't win it but hopefully it will hold in there for a little bit in the average would be nice," he said. "It won't by no means win the average. As the week goes by the sun gets to (the steers) and they slow up a little bit."

Wade Sumpter, of Fowler, Colo., tied Cassidy for the round win steer wrestling.

The two followed their 5.6 from the afternoon with a 5.2 in the evening to move into the average lead with a 10.8.

Right behind her was Serena Mote, of Brush Prairie, Wash., who took the average lead with a 17.46 that gave her a two-round time of 34.95.