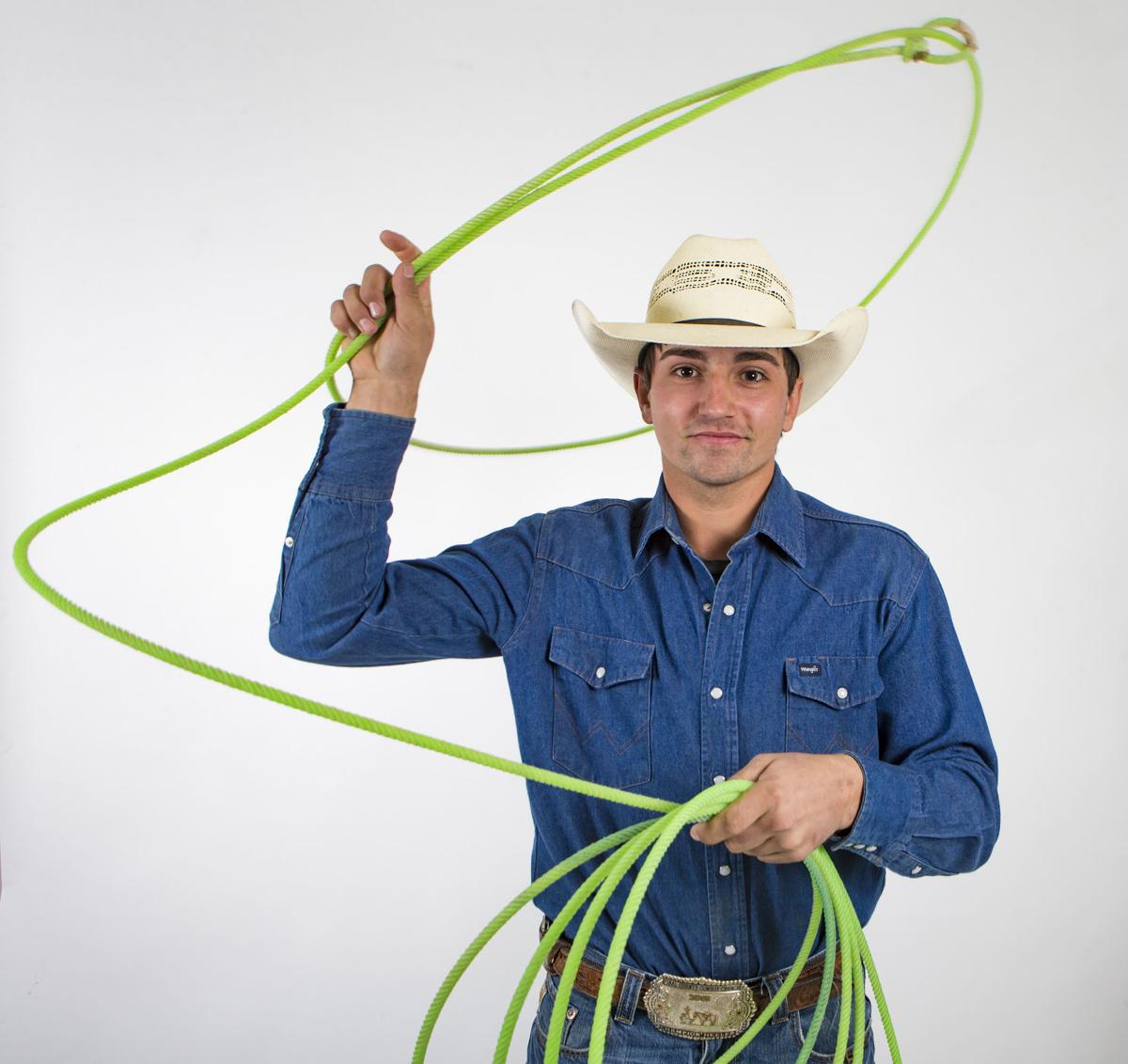 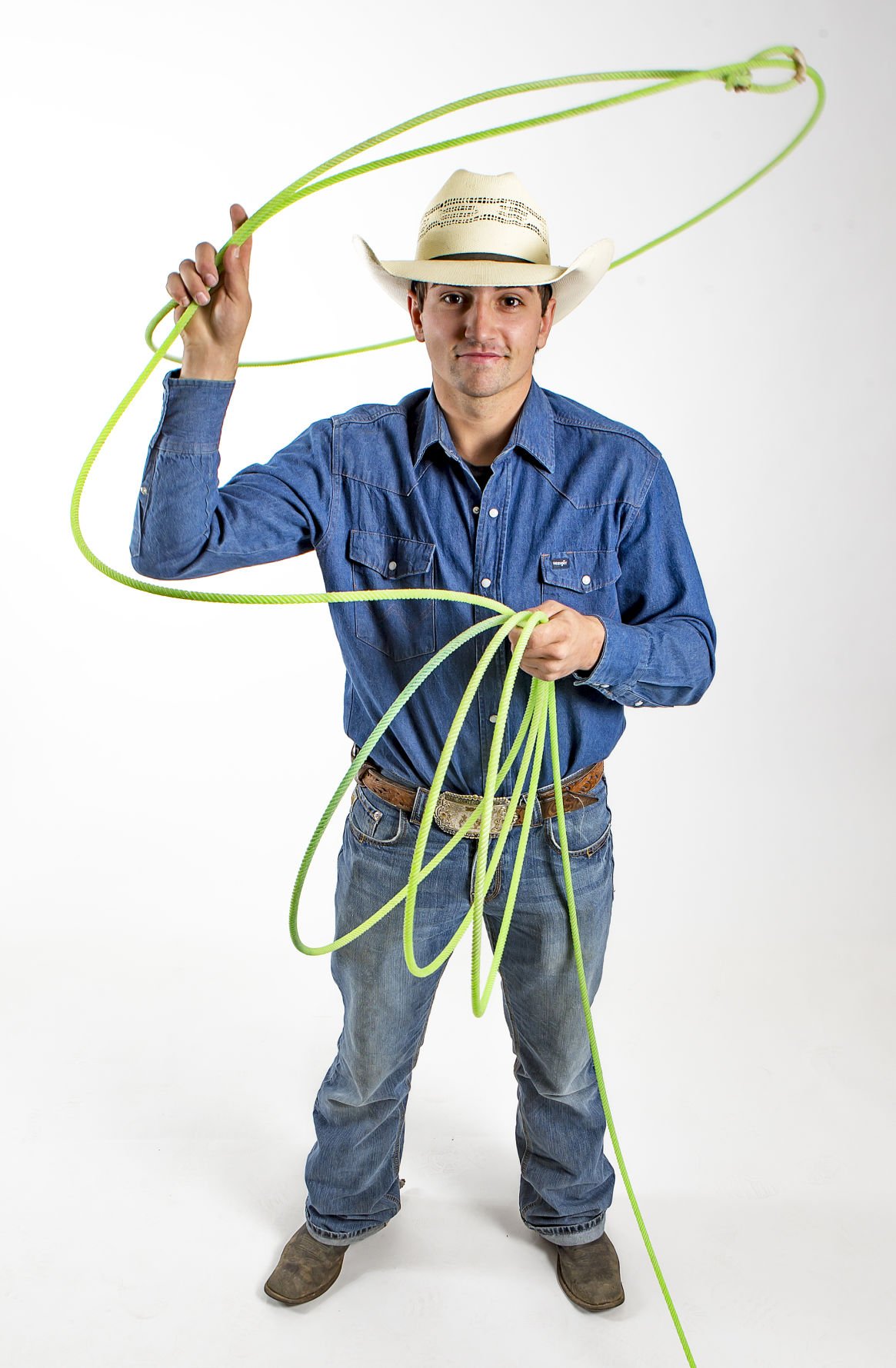 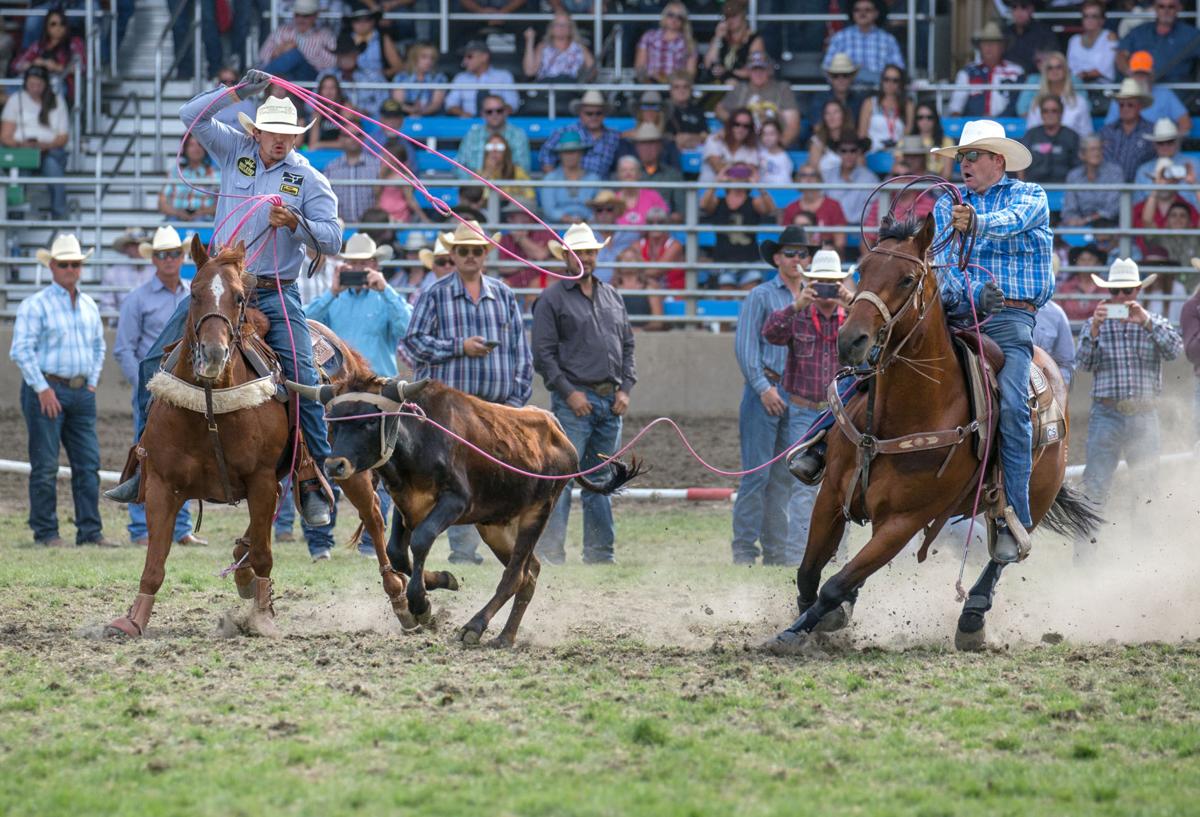 Heeler Calgary Smith, of Adams, and header Jason Stewart, of Heppner, rope their steer in 4.8 seconds to clinch the team roping title on Sept. 14, 2019, at the Pendleton Round-Up.

Heeler Calgary Smith, of Adams, and header Jason Stewart, of Heppner, rope their steer in 4.8 seconds to clinch the team roping title on Sept. 14, 2019, at the Pendleton Round-Up.

PENDLETON — Calgary Smith grew up in the shadow of the Pendleton Round-Up on a ranch just outside the small town of Adams.

His family attended the Round-Up on a yearly basis, and the young cowboy would often take snapshots of the champions wall, telling anyone who would listen that his name would one day be up there.

“I didn’t think it would be this early,” said Smith, who won the team roping title with Jason Stewart of Heppner three weeks ago.

Smith, 20, and Stewart turned in a time of 4.8 seconds in the finals, and finished the week with a Round-Up record time of 17.1 on three head to win the title.

It was an emotional day for Smith, who recently lost his grandfather, Charles Cain. He broke down in his father Chad’s arms after his victory lap.

“It could not have worked out better than it did,” Smith said. “Running out and going over the rails was quite amazing. I’ll never forget that. I lost my hat — that was embarrassing. They give you your 5 minutes of fame, then move onto the next event.”

While his childhood dream came true, the Pendleton title also was special for another reason — it was the first time Smith and Stewart placed first at a PRCA rodeo. They had a few seconds and thirds.

“I have been riding on my PRCA permit for three years,” Smith said. “I told Jason we needed to win at least one pro rodeo this year. He said, ‘Let’s win Pendleton.’”

“We had not won a pro rodeo,” Stewart said. “A couple of kids his age had won. I told him we’d win Pendleton, and he said, ‘Yeah, sure.’ And we did. His family was there, his grandparents — the emotions are just so overwhelming. It’s the biggest rodeo on our area, and he’d been going since he was a little boy.

“I know the meaning of it. You win Pendleton or Cheyenne, your name goes down in history. To do that at 20 is pretty special. I’d almost forgot what it felt like.”

It was the second Pendleton title for Stewart, who won the steer roping title in 2003.

Smith, a 2017 graduate of Pendleton High School, was a three-time national high school champion in team roping as a heeler.

He won as a freshman with Justin Farber, as a sophomore with Jack Graham, and as a junior with Pendleton’s Trent Sorey. Smith and Sorey made a second run the following year, but did not have much success.

Smith has been rodeoing at Walla Walla Community College, and on the Columbia River Circuit. He has not had a consistent partner, so this spring he asked Stewart, 43, to head for him.

“Jason has been around the block, and has done what everyone dreams of,” Smith said. “I needed a partner and he was around. Thank God he said yes.”

Stewart did not agree to the partnership right away.

“I was like, ‘You can’t get anyone better than me? I’m washed up,’” Stewart thought at the time. “I could not have won the Big 4 Award without him. He has a big future ahead of him. I don’t mind tagging along.”

Smith and Stewart plunked down $450 each to compete at Pendleton. In the end, they got a great return on their money, earning $8,788 apiece — not to mention a treasure trove of items that are handed out to the winners of each event.

The duo posted a run of 5.8 seconds in the first round, and 6.5 on their second. Their 4.8-second run in Saturday’s finals put them atop the leaderboard with an arena record on three.

Smith took a ride on his championship saddle for the first time Monday.

“They are top-of-the-line saddles,” Smith said. “I’m going to use mine.”

Which means his horse, a 12-year-old sorrel gelding named Colonel, also got a taste too.

“I traded a four-wheeler for him the fall of my freshman year,” Smith said. “I trained him myself. It worked out good for me.”

Rumor has it, the four-wheeler still runs, too.

While the Pendleton title is nice, the glory fades quickly.

Smith and Stewart are back out on the rodeo trail. They have been to Salem, Coeur d’Alene, Idaho, and Billings, Montana.

Smith has a college rodeo in Ontario next weekend, then it’s off to Arizona with Stewart. They will return in January for the Columbia River Circuit finals, go back to Arizona, then return in March.

“I want to finish college before I get ready to take off,” Smith said of a full-time rodeo career. “We have already talked about roping next year, but after that, I don’t know. Jason has a family and won’t want to do 100 rodeos a year.”

“That’s how I want to make a living,” Smith said. “I want to get my degree, but I haven’t thought about anything (work). I don’t have a backup plan. I put all my marbles in the same basket.”

And his name on the champions wall.

'I'm hurting for my people': Past and present Huskers react to George Floyd's death and protests