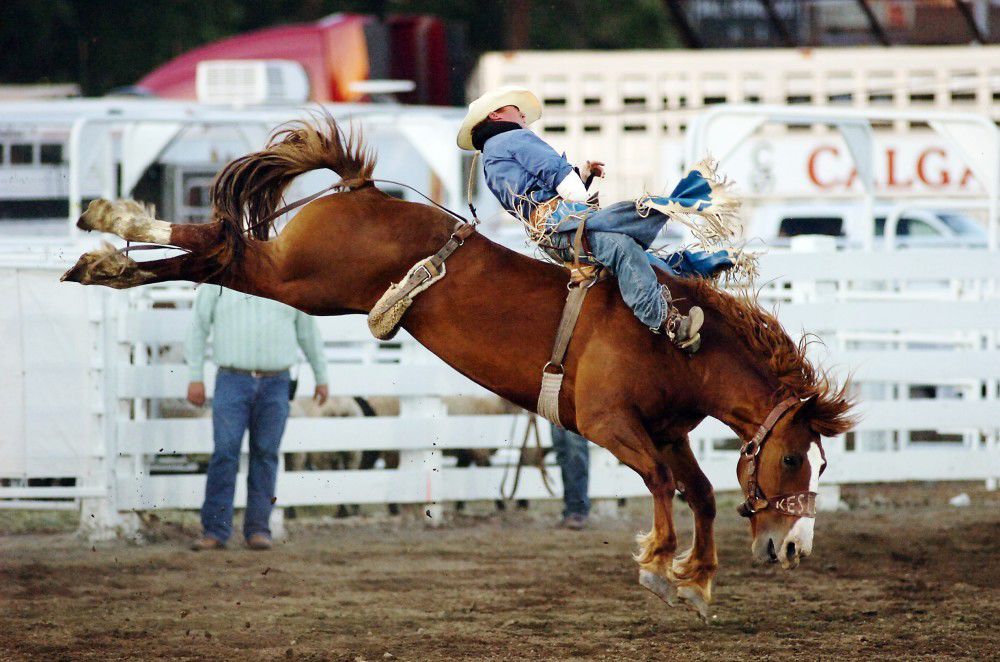 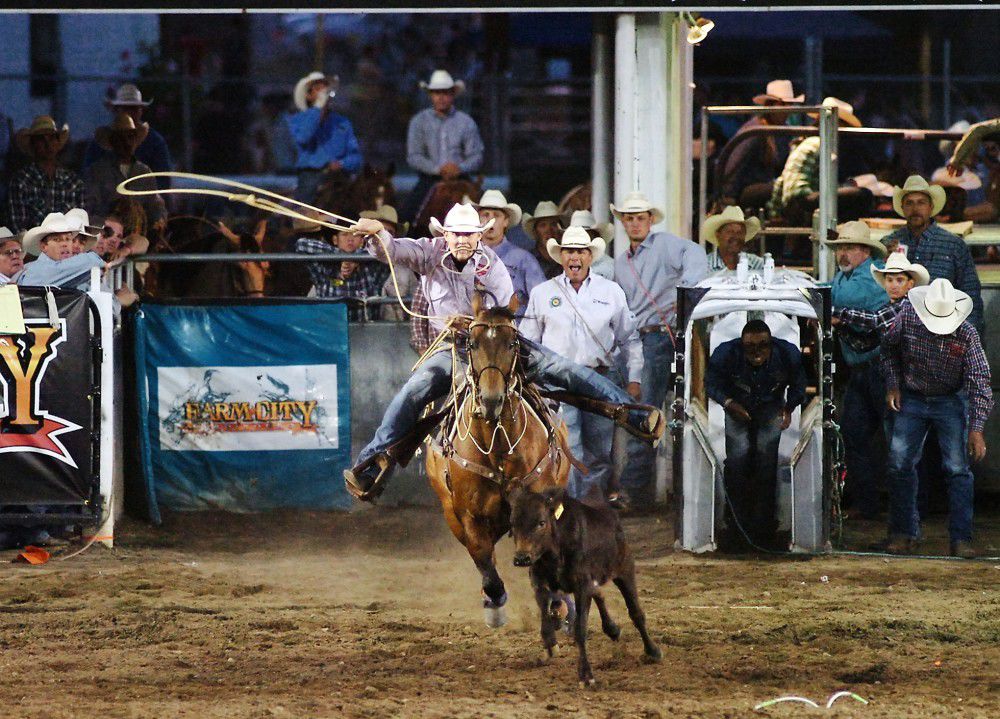 <p>Tuf Cooper of Decatur, Texas, throws his lasso on his way to 9-second time in tie-down roping Wednesday at the Farm-City Pro Rodeo in Hermiston.</p><p></p> 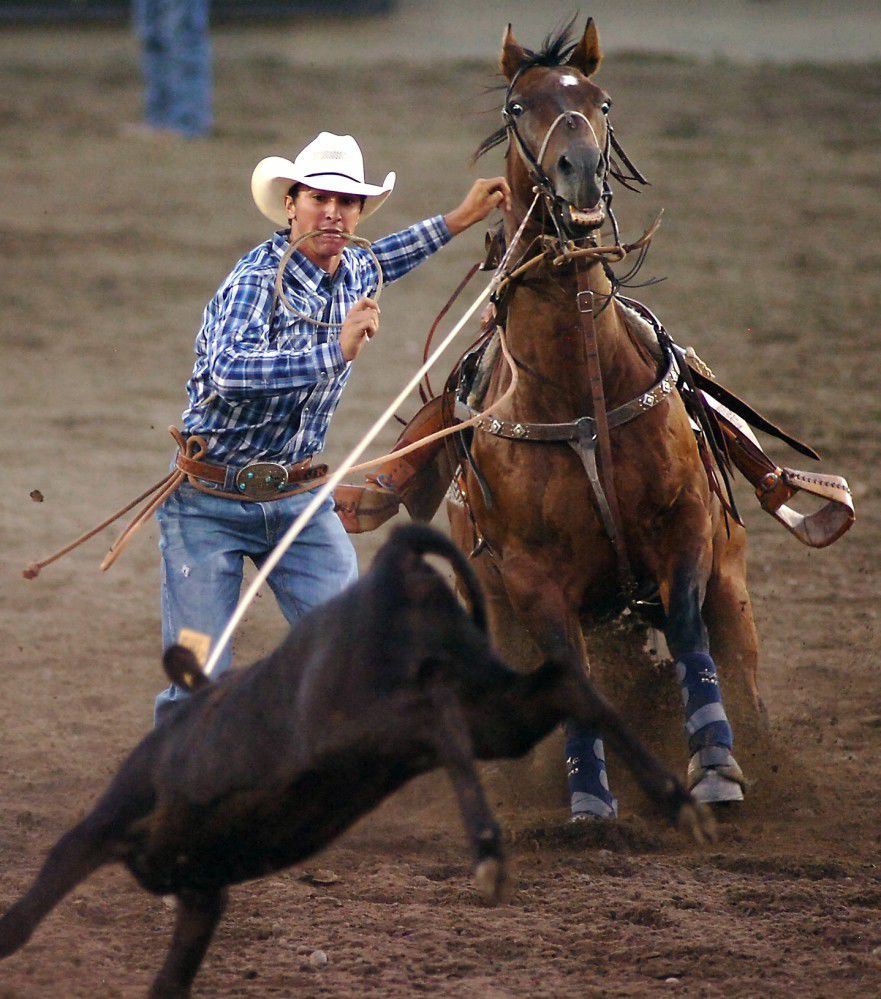 <p>Jordan Ketscher of Squaw Valley, Calif., jumps from his horse while turing in a 13.9-second ride Wednesday at the Farm-City Pro Rodeo in Hermiston.</p>

<p>Tuf Cooper of Decatur, Texas, throws his lasso on his way to 9-second time in tie-down roping Wednesday at the Farm-City Pro Rodeo in Hermiston.</p><p></p>

<p>Jordan Ketscher of Squaw Valley, Calif., jumps from his horse while turing in a 13.9-second ride Wednesday at the Farm-City Pro Rodeo in Hermiston.</p>

HERMISTON  World champion cowboys current and former were competing hard for a share of the near $200,000 up for grabs at the 25th Farm-City Pro Rodeo in Wednesdays first performance, but the star of the show just may have been the aptly named four-legged athlete Victory.

The 12-year-old brown gelding owned by Hermistons Blair Burk was part of the two quickest times in tie-down roping and helped Decatur, Texas, cowboy Tuf Cooper take the lead through one round with 18.3 seconds on two head.

This is the second year Ive got him in the pros,?said Burk. He came from a good buddy of ours and hes done a lot of different things. Hes done some heeling in team roping as a professional ... (My friend) told me about him and boy hes been great.

Me and Blair have been travelling together all year and hes letting me ride that horse,?he said. Me and that horse have a good track record.

Burk, who moved from Oklahoma to Hermiston to be near his wifes family, posted the quickest time of the night with an 8.3 while Cooper had a 9.0.

Burks winning check from the performance will be all hell get in Hermiston to help him secure his spot in the National Finals Rodeo. He is ranked No. 13 in the PRCA?but had some trouble in his slack run on Wednesday and posted a 27.3.

Cooper is looking good for a possible win, though he wont get any more rides in Hermiston as each contestant moves on after their day of competition and a new crop of riders comes in looking to beat their times.

Although he came to Hermiston ranked No. 3 in the world, he said its not were he wants to be. As one of 10 silver stops on the Wrangler Million Dollar Tour, a win at Farm-City would certainly help him get there.

I chose to enter this rodeo other than some others that were close to the house this week because I?love Hermiston and I?always do good here,?he said. And its such a great rodeo. Its good to be back in the northwest for the remainder of the season.

Were jamming along, theres been a few good wins in the bag this year thats kept us up close to the top. Im super excited about the rest of the season.

He teamed with Kessler Rodeos Alley Trail for 85 points on Wednesday, which put him second behind Caine Riddle who rode Kesslers Starburst for 87.

Its been going by fast but its been a rush every time. Its been fun,?Foss, from Terrebonne, said of his season. Ive been getting on here (in Hermiston) since I was a junior in high school and its fun to get out here and throw up 85. Its the first time Ive ever been in the 80s here so it feels real good.

One saddle bronc rider that is rarely second billing is Taos Muncy of Corona, N.M., who won the round with an 84 on Calgary Stampedes Redon Acres.

Muncy took a share of the Hermiston title last year and finished his season with a world championship, his second in a seven-year career.

Im having a little bit slower year so I was really looking forward to coming out here,?said Muncy, who is ranked No. 10 in the PRCA. I really love the northwest and going to rodeos up here. Im winning right now but I?know theres a lot of great broncs and bronc riders to come.

Im just holding my breath and hoping to get some money out of it. But thats why this rodeo is so great is the stock, horses that anyone would want to get on.

Also getting a boost to his already strong season in Hermiston was steer wrestler Jake Rinehart, who turned his steer in 4.8 seconds Wednesday night to give him the two-head lead at 9.8.

Stanfields Travis Carnine is second in the average at 10.4.

The team roping, barrel racing and bull riding were not completed in time for inclusion in todays edition.

Ty Blasingame and Rich Skelton held the lead in team roping after Wednesdays slack but their 10.1 time left plenty of room for another team to slide into the lead.

The Vale, S.D., rider enjoyed some success on the pro cicuit last season, with a win in Pendleton as the highlight, but is doing even better this year at No. 6 in the WPRA?standings.

A second round of slack was run after the rodeo on Wednesday and there will be another round of slack today at 2 p.m. so the leaderboard is bound to take on a different look by the time Farm-City Arena puts on its main show tonight.

Check Fridays edition for highlights from those rounds.