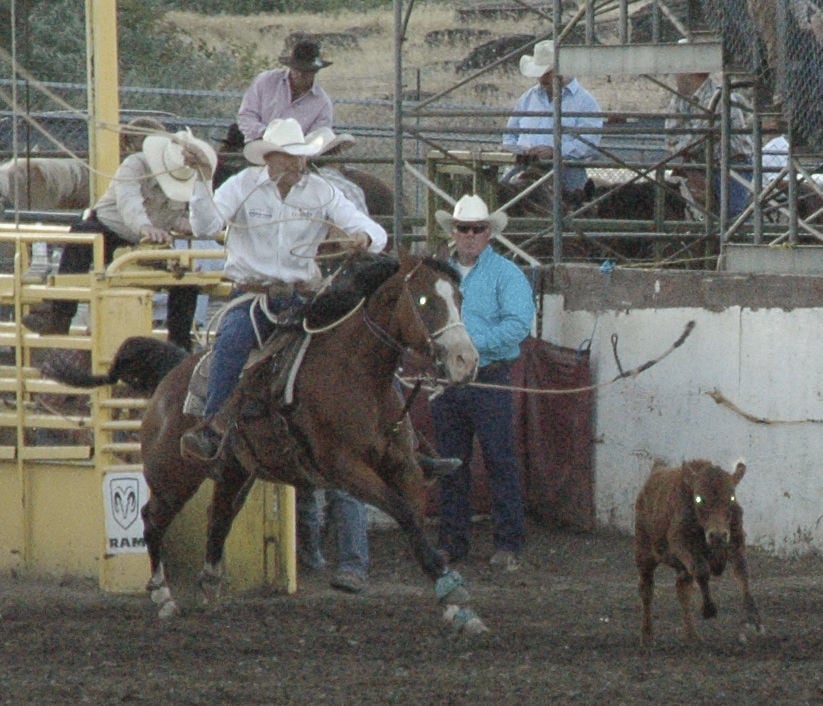 <p>Hermiston's Brad Goodrich competes in the calf roping event Saturday at the Fort Dalles Days Rodeo in The Dalles.</p>

<p>Milton-Freewater's Joni Hagler competes in the breakaway roping Saturday in The Dalles.</p>

<p>Hermiston's Brad Goodrich competes in the calf roping event Saturday at the Fort Dalles Days Rodeo in The Dalles.</p>

<p>Milton-Freewater's Joni Hagler competes in the breakaway roping Saturday in The Dalles.</p>

THE DALLES  The 47th Annual Fort Dalles Days Rough & Wild Rodeo consisted of 365 entrants with about one fourth of the competitors traveling from Eastern Oregon to compete in the Northwest Professional Rodeo Association (NPRA), which held its final round on Saturday in The Dalles.

Ive been pretty fortunate to have such a good rodeo career, said Brad Goodrich, 45, a multiple-time Columbia River Circuit champion. Like any other athletic event though, its a young mans game. Im still a fairly competitive cowboy. Im probably not as tough as I use to be because Im getting older. Im still in pretty good physical shape though and Im able to compete with everyone else.

Jodi Goodrich has had a remarkable season and its actually the best of her 30-year rodeo career as shes atop the NPRA standings in barrel racing. Goodrich, 47, also competes in breakaway roping, but she didnt too well in that event Saturday.

Its been a real good year, said Goodrich, whose best time in barrels this season is 17.3 seconds. I really didnt set a goal to win the NPRA title, because Im focusing primarily on qualifying for the Columbia River Circuit finals at Redmond in November. However, if the season ends with me atop the standings, that would be great and I would be pretty happy to win a championship.

Brad had some bad luck in The Dalles, timing in with a 12.1 second mark in calf roping.

This year hasnt been going too good for me, but Jodi is doing an excellent job, he said. We didnt place to well in the roping events tonight and we just took a little too long. I usually tie the calf in eight or nine seconds, but he was a little wild. We love going to rodeos with our son Gator (age 7) and daughter Josie (age 10) while traveling around all summer to these events.

Foster timed in at 7.7 in Saturdays steer wrestling, much slower than his best effort in the five second range that hes had at other rodeos this year.

Im having lots of fun entering rodeos this year, said Foster, 21, who was competing in his first rodeo this year with his newly purchased 10-year-old quarterhorse Muscles. Sometimes you get a good time and other days you just dont do as well. He didnt quite work as well as I thought he would. Thats alright though, because Ill keep working with him and well do better the next time.

Other area riders who competed in the four-day event included the Crossley sisters of Hermiston. Jordan Crossley and her sister Jade entered breakaway roping and barrel racing Thursday.

Pendletons Alexis Doutre competed July 18 in the opening day and she took second place in breakaway with a fabulous time at 2.4 seconds.

Stanfields Travis Taruscio was in a three-way tie for first place in steer wrestling at 5.4 seconds, which he competed in Friday. Dalton Massey of Hermiston, took sixth place at 6.6 seconds.

Most of the area cowboys and cowgirls will continue competing in the remaining NPRA?rodeos, including the next event at the Jefferson County Fair & Rodeo July 27-28 in Madras. The 34 event NPRA schedule includes 16 rodeos remaining, with the finals Sept. 21-22 in Prineville.