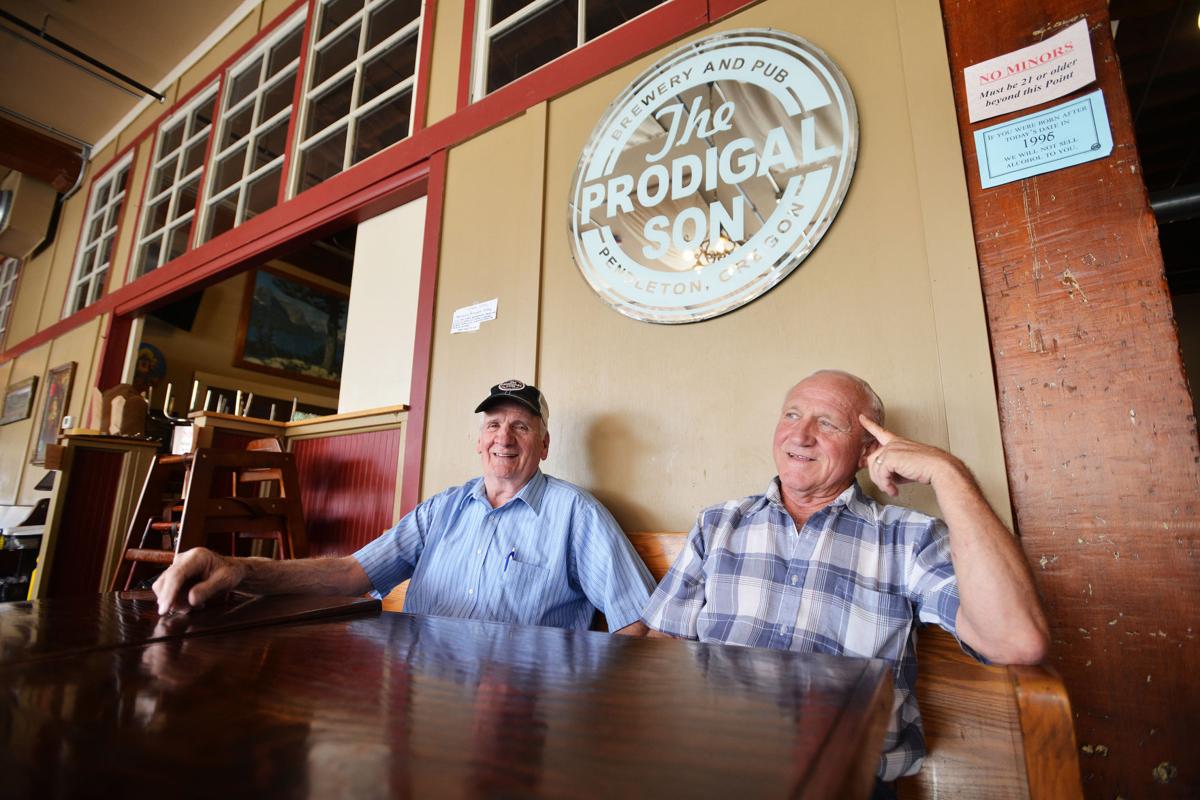 Staff photo by E.J. HarrisBruce Gianotti, left, and Lee Wilson are the namesakes for the Bruce/Lee porter at The Prodigal Son brewery in Pendleton. 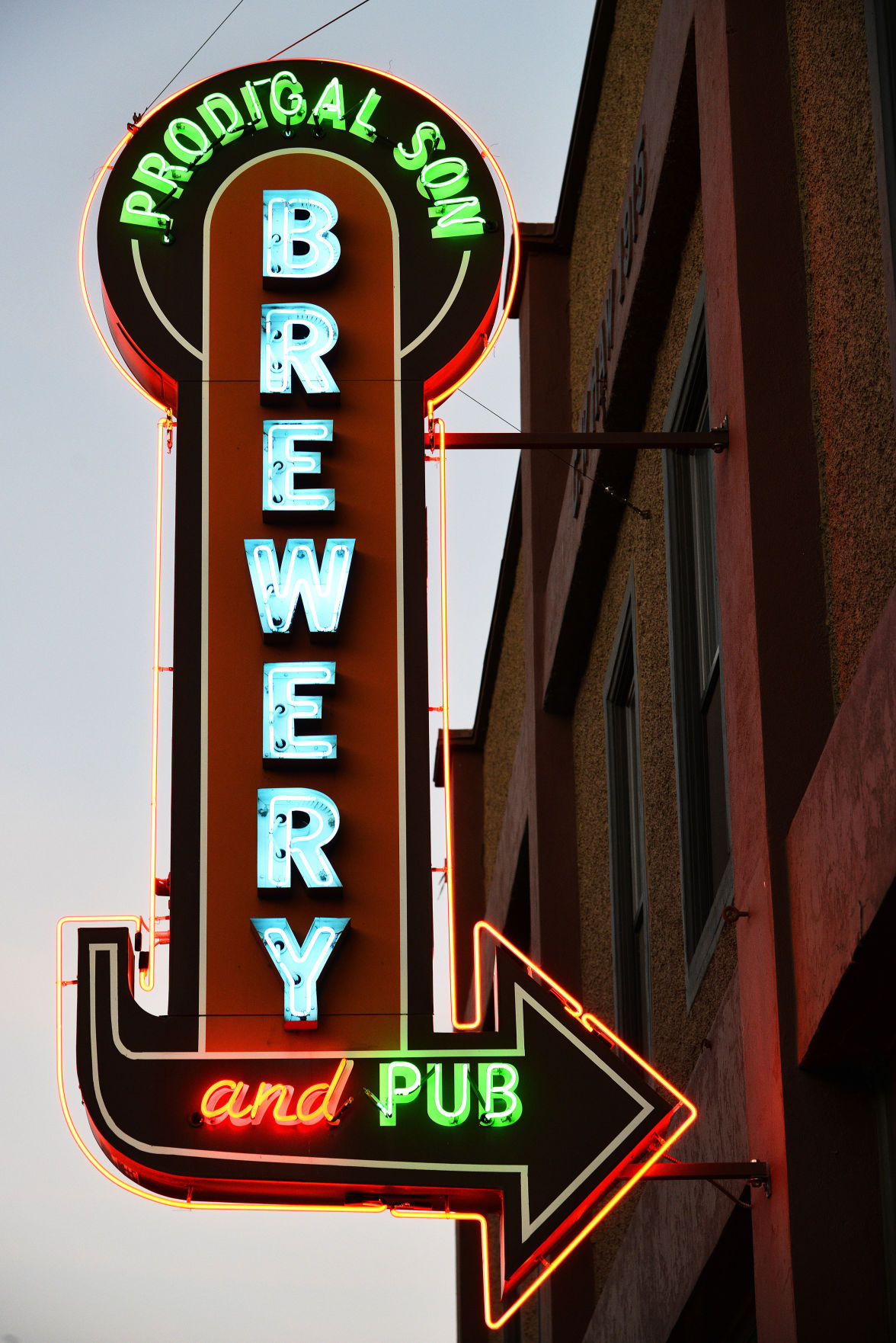 Staff photo by E.J. HarrisBruce Gianotti, left, and Lee Wilson are the namesakes for the Bruce/Lee porter at The Prodigal Son brewery in Pendleton.

For his first Round-Up as the owner of a brewpub, Tim Guenther felt confident his summery Golden Ale would be a hit.

Guenther, who owns the Prodigal Son Brewery and Pub, starts planning for the hordes of rodeo-goers several months out. His 110-gallon operation was once the only brewery in Pendleton, producing craft beer for a town fueled by Coors Light and whiskey. Today, Prodigal Son has 10 beers on tap, with a total repertoire of more than 40.

And for his first Round-Up in 2010, Guenther brewed “a crap-ton extra” of the ale, “A Beer Named Sue,” expecting folks to wash down the rodeo dust with something light, crisp and refreshing. He was wrong.

“We sold out of the porter,” Guenther said. “I guess they just wanted something different.” Bruce/Lee Porter has been equally popular in the years since.

It could be that the chocolate-coffee smoothness offers palates a welcome break from the lagers sold in the Round-Up Arena. Or it could be that its 7.4 percent alcohol content allows drinkers more bang for their buck.

But the reason that Guenther likes to believe is that Bruce/Lee Porter “happens to have a bad-ass sounding name.” And that name has an equally bad-ass back story.

Guenther chose the moniker to honor Bruce Gianotti and Lee Wilson, old-school guys with a get-it-done spirit who helped build the Prodigal Son, a fitting example of Round-Up culture.

“I still can’t figure out why they named it after us,” Gianotti said while seated on an antique couch in a corner of the Prodigal Son. He chatted between sips of the porter. Wilson sat next to him, drinking the seasonal Raspberry Wheat.

“I don’t like the porter,” Wilson said with a roguish grin. “I think it’s an acquired taste.”

Wilson’s profile, along with Gianotti’s, appear on coasters and beer coins and T-shirts and baseball caps, all as part of the Bruce/Lee brand. But the men shy away from the spotlight, referring to the iconography as their “seven and a half minutes of fame.” Gianotti gave his T-shirts to his grandchildren.

As Guenther wandered past between restaurant owner duties, Gianotti waved him down, asking why he named the beer after him.

“You guys helped build all of this. We thought we should honor you,” Guenther said. “You made a real difference.”

He pointed to various details in the restaurant’s interior, reminding the men of all they did in the months before the restaurant opened. Wilson embellished a mirror with the Prodigal Son logo. Gianotti re-purposed garage doors for the bar’s divider. Wilson damaged his truck’s fender while dismantling the previous owner’s basement waterfall. The two consistently labored 12-hour days in the dead of winter, fixing a building without a heater. And they kept coming back, without complaint.

The Prodigal Son is located in a 1915 brick affair that once held a Packard dealership. The building’s blank-slate open space looked like possibility to Guenther and his wife, Jennifer. The couple was living in Portland when they decided to return to his Pendleton roots. Hence the name “Prodigal Son.”

The Guenthers conspired to open a brewhouse like the ones Portland is famous for. “Pendleton has a lot of traditional restaurants,” Guenther said. “We wanted a place where you could drink beer with your family.”

The old building was far from that space initially.

“It had to be completely gutted,” Jennifer said. “It became a real family affair.”

Guenther wanted a cheaper option than hiring a contractor. He contacted Gianotti, an old friend whose years in antiques dealing earned him status as a jack-of-all-trades. Gianotti recruited Wilson, who also sold antiques.

“He just said come down and give [Guenther] some ideas,” Wilson said. “Six months later I was still there helping.”

The pair denies that they had any significant influence on the success of the place, deferring all credit to the Guenthers and their vision. Yet the duo’s excitement helped earn the brewpub credit with the community, Guenther said. “These guys know everyone.”

That could be how the restaurant became a Pendleton institution so quickly. It’s the favorite meeting spot of groups like Bible studies, a knitting club and the men’s choir.

Evidence of Wilson and Gianotti’s antique-dealer creativity can be found throughout the Prodigal Son.

“I did not think this place would make it because it didn’t fit Pendleton. It’s not the cowboy theme,” Wilson said. He describes the interior as “a little back-woodsy.”

It features a hodgepodge of artifacts­, like a full set of the Encyclopedia Britannica, a 1920s-style wooden-tank toilet and a front bar gleaned from Montana.

There’s a fitting menu, created by head chef Matthew Barnes, another Pendletonian who returned home. He makes use of variety, including a range of gourmet burgers and pub favorites, like fish ‘n’ chips and mac ‘n’ cheese. They use local ingredients, which is more work but worth the quality, Guenther said.

And they brew all the beer in-house, a process that can take six weeks from hop to glass.

They tend to name the drinks creatively.

The Bruce/Lee Porter has earned the attention of national beer blogs like BeerAdvocate and Beervana, which awarded the Prodigal Son the Satori Award in 2010. “The award honors the beer that in a single instant allows the drinker to realize brewing magnificence,” according to Beervana’s site.

The man who tasted the Bruce/Lee, Jeff Alworth, noted it was special for its simplicity: “Nothing gaudy or ornamental about it, just pure pleasure.” To that affect, the porter perfectly matches the restaurant and the guys who built it.

What to expect during Round-up:

No additional seating, with a first-come, first-served policy. But they’ve added a wait-list phone app so you can roam nearby. A limited menu, but all beer will still be available, Guenther said.

Full windows, a shaded patio and breakfast buffet make this among the best spots for parade viewing. Guenther advises getting there by 8 a.m. for prime spots.