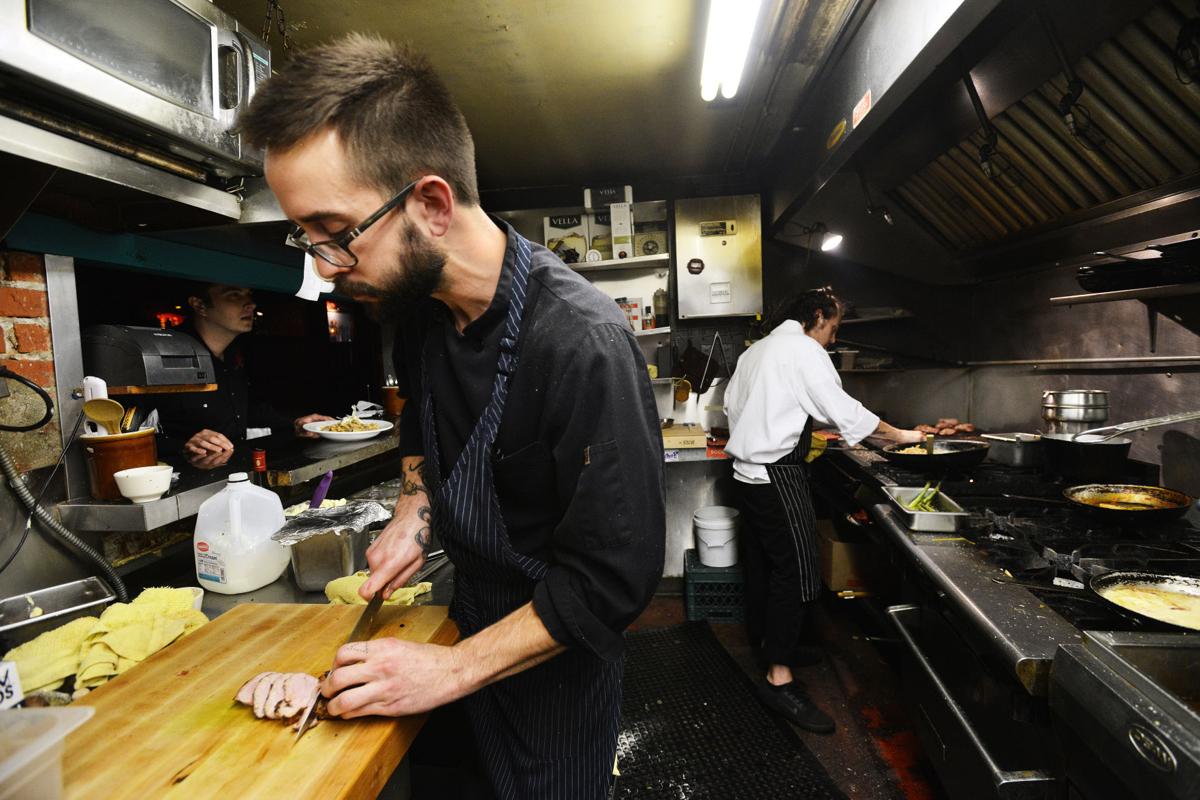 Executive chef Jordan Lebsock cuts a pork tenderloin while preparing an order at Virgil's at Cimmiyotti's in Pendleton. 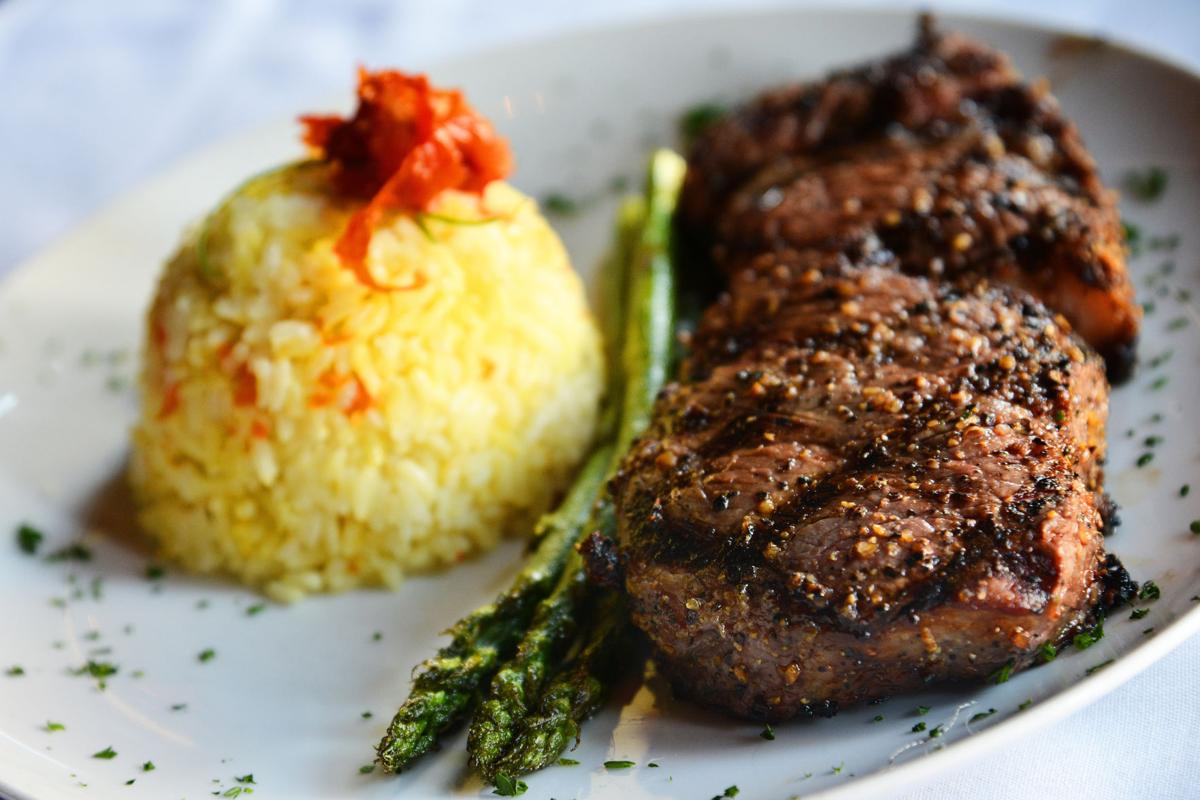 A New York cut steak with asparagus and rice pilaf. 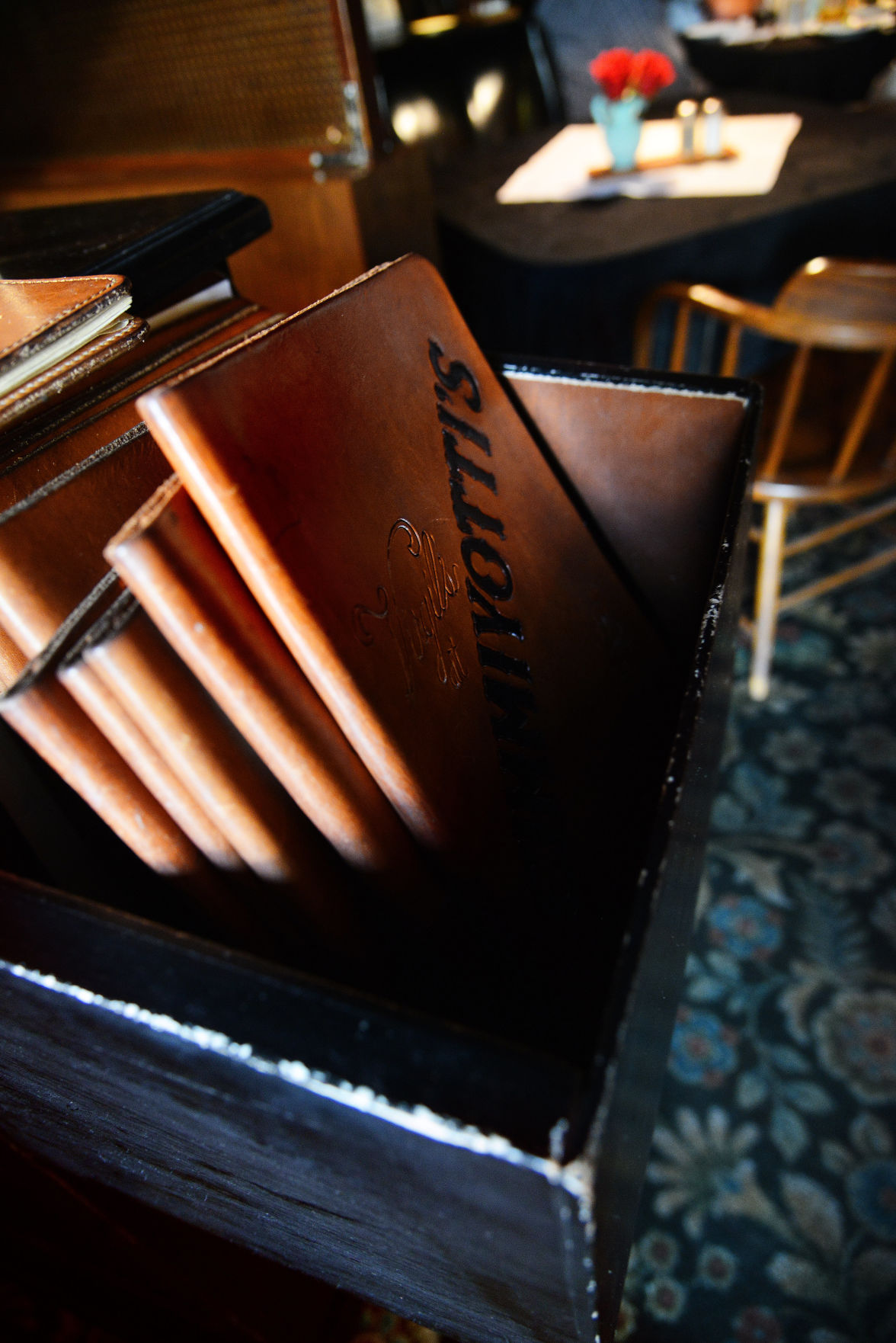 Leather-bound menus at a staple at Virgil's at Cimmiyotti's in Pendleton. 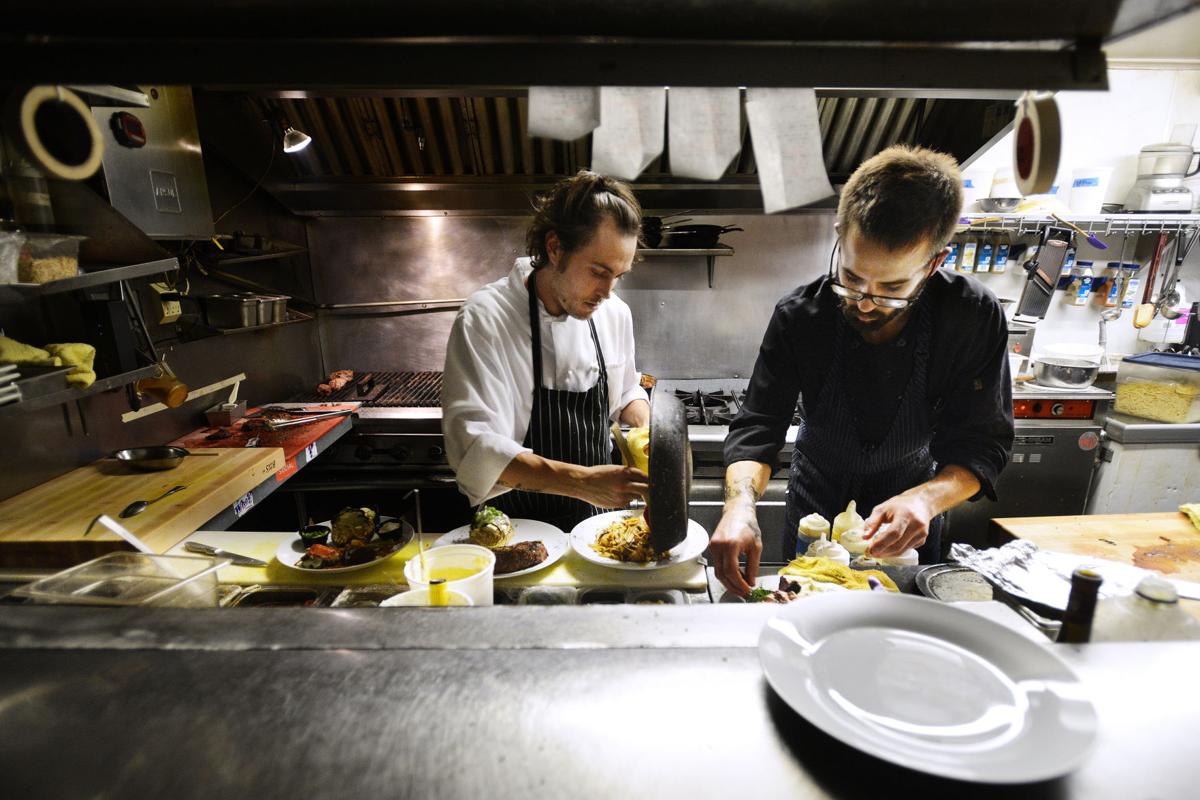 Executive chef Jordan Lebsock, right, and his sous chef Cody Rogers plate orders in the kitchen at Virgil's at Cimmiyotti's in Pendleton.

Executive chef Jordan Lebsock cuts a pork tenderloin while preparing an order at Virgil's at Cimmiyotti's in Pendleton.

A New York cut steak with asparagus and rice pilaf.

Leather-bound menus at a staple at Virgil's at Cimmiyotti's in Pendleton.

Executive chef Jordan Lebsock, right, and his sous chef Cody Rogers plate orders in the kitchen at Virgil's at Cimmiyotti's in Pendleton.

His indecision isn’t surprising. After all, he is a chef.

What is surprising is that he picks two dishes on opposite ends of the flavor spectrum: Italian, which is deep, heavy and layered, and Japanese, which is vibrant, precise and invigorating, he says.

Like his palate, Lebsock’s position as executive chef at Virgil’s at Cimmiyotti’s is seemingly oxymoronic. He’s the new guy in an old kitchen, fusing classic dishes with exotic flavors. In that way, he’s the perfect fit for the restaurant that achieves modern luxury without forgetting its legacy, offering Round-Up crowds a fine dining retreat following rough-n-tumble rodeo action.

The rebirth of the restaurant began in 2008, when a waitress named Jennifer Keeton happened through Pendleton, hunting for black cowboy boots. The town left a mark, and six months later, she was back home in California when she heard that a famous Round-Up City restaurant was slated for destruction. The 32-year-old single mother of three decided to take a risk.

One 14-hour drive later, Keeton stood in the center of the empty Cimmiyotti’s Restaurant, breathing in the dust left by years of neglect.

“It was in the coffin and already had a few shovels of dirt on it,” Keeton said. “I didn’t know how many people had tried before me and failed. I didn’t know the odds were stacked against me. All I knew was I needed to bring it back to life. It was like my destiny was instantly presented to me.”

She started by Googling “how to open a restaurant in Oregon.” She’d fill out paperwork after work and when she could get a week off, she’d drive to Pendleton, her 4-year-old son in tow.

Eager to restore the space to its original grandeur, Keeton researched Paul Cimmiyotti, the champion steer roper and Round-Up director. While he ran Cimmiyotti’s from 1959 to 1994, it reigned as The Place, a weekend hot spot where Pendletonians and visitors flocked for food and company in a high-class atmosphere.

Keeton captured the old-school romantic vibe, papering the space in velvet, restoring the black leather booths, topping the tables with red roses. She even paid the saddlemaker next store to replicate the original leather menus. She decided on the name Virgil’s at Cimmiyotti’s — she’d always wanted to name a restaurant after her dad, Virgil, but couldn’t stand to see the Cimmiyotti’s name dropped. The restaurant opened in July 2009 to praise from a community grateful a piece of history had been restored.

All Keeton needed was a reliable chef.

In her first few years of restaurant operation, the chefs she hired would skip out without much warning, leaving her desperate. There’s not a lot of local culinary talent to draw from. She even flew in a candidate from Texas, only to find him sloppy drunk at her restaurant’s bar. When she had to run the kitchen alone on Valentine’s Day, she knew she needed Lebsock.

Keeton first met Lebsock when he was 18. A Pendleton native, Lebsock spent his teenage years cooking at various Pendleton restaurants. He helped open Virgil’s at Cimmiyotti’s before heading off to the Wine Country Culinary School at Walla Walla Community College.

He’d been cooking at Wildhorse Casino’s Plateau Restaurant for six years when Keeton sought him out.

“It’s part of the whole way this place has lined up for me. He was here opening day,” she said. “I think he’s the one who can take this restaurant to its full potential. I haven’t had a cook or chef like him who just loves what he does.”

Virgil at Cimmiyotti’s offers steak and seafood staples, served with a dash of fusion when the seasonal vegetable allows it. Keeton loves the crab cakes. Lebsock said they sell out of their “beautiful, hand-cut, 14-ounce ribeyes.”

Lebsock hopes to return some of the original hits to the menu — like the peppered steak his parents used to order. “This was their romantic spot,” he said. “They’d always bring home leftovers.”

For now, Lebsock is gearing up to command the kitchen for his first Round-Up.

“I’ve seen 11 in this industry, so I know what’s coming,” he said. “There’s a lot of people, a lot of noise. You’ve got to stay focused and hone in on what you know. You can’t get overwhelmed and let the anxiety get to you.”

Though it serves up to 180 guests on a typical Saturday night, the kitchen at Virgil at Cimmiyotti’s is tiny, manned by only three cooks. Lebsock says the tight space can be a hindrance: temperatures soar, counters get cluttered.

While looking to improve, Lebsock, like Keeton, is always conscious of what’s come before. He’s honored to be a part of Round-Up culture, helping Pendleton connect with a slice of history that’s been given new life.

“I’ve been really fortunate to work here,” he said. “The restaurant has quite the legacy.”

What to expect during Round-Up:

Additional seating and live music in a white tent out back, complete with the classic black tablecloths. Make reservations before the dinner hour or walk in late.

This dinner-only venue is the perfect choice for date night. Pair it with a light lunch for optimal stomach capacity.