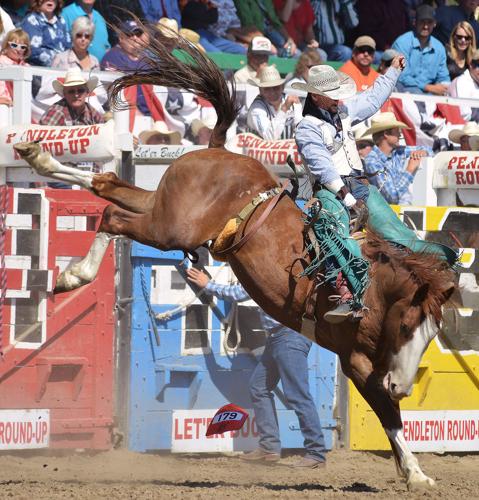 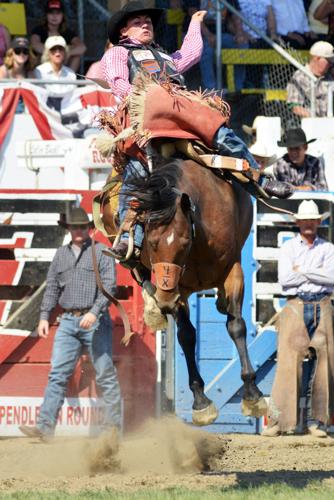 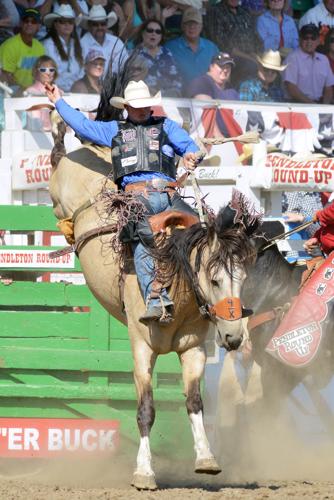 The draw is everything in rodeo.

The right animal can lead a cowboy to reroute his caravan and travel any distance just for the chance to get on its back or wrestle it to the ground.

I looked him up and hed only bucked a few times, Denny said Friday. I just didnt think he was a good enough horse to get to the short round. He just looked really weak.

But as is often the case, the itch to ride caught up with Denny, and he spent all of Thursday night in his car, arriving only a couple of hours before his scheduled go with Music.

The eight seconds were a blur, Denny said, and the young horse was nothing like hed expected.

Here at Pendleton sometimes theyll buck a lot better because they dont want to hit that grass, Denny thought out loud following the ride. So the grass worked out in my favor, I guess.

The short-go draw is the last worry on his mind, but the whirlwind couple of days has taken its toll on the veteran rider.

(All the horses) are going to be good tomorrow, he said. Wait, its tomorrow, right?

Cody DeMers, of Caldwell, Idaho, is one of four riders from Fridays section that will join Denny in Saturdays 14-man short round.

Like Denny, DeMers required a web search to familiarize himself with his draw  Four Star Rodeos Casey  what he found was a little different than the leaders result.

I looked him up on the Internet, and Ive seen some guys make some pretty good rides on him, so I figured he must be OK, he said.

The scouting proved right and DeMers and Casey posted a 79-point score, good for seventh position.

This rodeo is what its all about, DeMers said. Yeah, the national finals is big and exciting, but Pendleton is too.

DeMers is one of two past champs in the championship field  winning in 2005  two-time champ Will Lowe is the other.

Justin McDaniel was the runner-up in 2007.

Cort Scheer was not about to miss a chance on Sankey Pro Rodeos Lady Killer.

Scheer splits his time atop buckin broncos and working on his familys 500-head cattle ranch in Elsmere, Nebraska. So it wasnt until all of his responsibilities were finished that Scheer  the third-ranked rider in the world  could make the 20-hour drive west.

I wasnt even planning on coming. We got all of the work done and I told my dad Shoot, if you dont mind, Id kind of like to get on it, and he was like Well, the works all done, so go ahead, he said of the conversation he had with his father Kevin early Thursday morning.

The weary Scheer arrived just in time to give Lady Killer the try hed driven so far to get. And fortunately, the beige mare performed exactly as hed hoped, teaming up for an 84-point ride, making the sleepless night well worth it.

Its kind of hard to drive 20 hours to get on a horse that you know you arent going to win on, Scheer said. That horse you know you could win on if you ride good, so youd drive your wheels off to get to it.

The 84-point ride drew the crowds rowdy affection and placed him in second standing for Saturdays short round.

Scheer, whos only made Saturday once at the Round-Up, knows a big score will be required today to earn the championship buckle and saddle.

Tomorrow youre going to have to be flirting with 88 or 89 to win this thing, because youve got Korkows, Sankeys, Calgarys, he said. Youve got the juice here.

Making the task even taller is the NFR caliber field of cowboys in todays 12-man short round. The last three champions  Jake Wright, Cody DeMoss and Taos Muncy  all earned a second bronc, and the inclusion of Chet Johnson (2007) and Jeff Willert (2005) means that five of the 12 men competing have won buckles at Pendleton.

Steve Woolsey finds himself in Las Vegas more Decembers than not. But even so, the 10-year veteran has never been able to make any cash in Pendleton.

Woolsey hopes an 85-point ride on Four Star Rodeos Speculation will change that. The ride already accomplished one rare occurence for the diminutive cowboy  a spot in Saturdays Round-Up final performance. Its something hes only done once before in 10 trips to Pendleton.

Its been rough on me every year, the Utah native said. But you cant miss Pendleton.

And just as his rides in Pendleton have been unpredictable, his draw was on Friday as well.

While hed never ridden the mammoth bull before, he thought he knew its tendencies. But rather than start left and turn right like hed expected, it went right and only right.

It just wasnt the same track, so I kind of had to counteract him, he said. In the world of bull riding, there aint no guarantees. The first jump might be the same, but after that theres no telling what hes going to do.

The eight seconds earned him second place money in the first round, just two points behind Dallee Mason.

Fridays action muddied the waters in the bull riding, with five competitors advancing on for another ride.

Askey, a cowboy from Martin, Texas, is just happy to be finally competing in Pendleton.

A late bloomer, who only began competing professionally four years ago as a 22-year-old, Askey has been sidelined by injuries the last two Septembers. But the maiden voyage has already made quite the impression.

Its my new favorite rodeo. Its awesome, he said. You can sit out there on the grass and watch. Youre part of the action when youre out there. The horses come by you. Its kind of neat.

Last years winner Clayton Foltyn remains in the field, but his 81-point score on Thursday, is six points behind Mason.

Sign up to receive news directly to your desktop. Click the bell icon in the nav bar, at any time to change your settings.

Get up-to-the-minute news sent straight to your device.

Check your email for details.