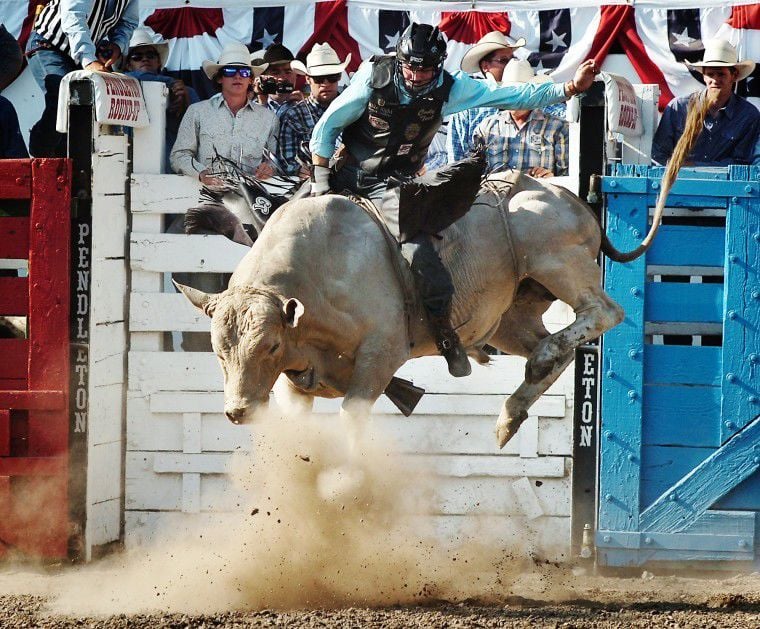 <p>Cody Teel of Kountze, Texas, rides Due North for 86 points in bullrriding in Teel's first appearance Wednesday at the Pendleton Round-Up.</p> 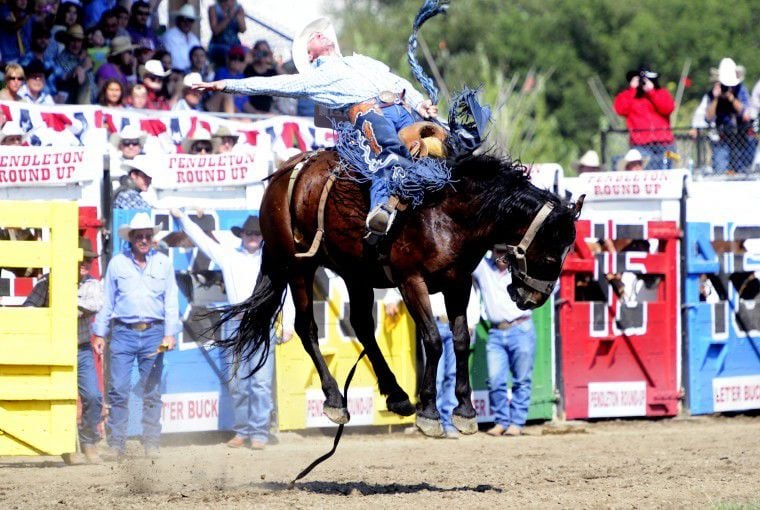 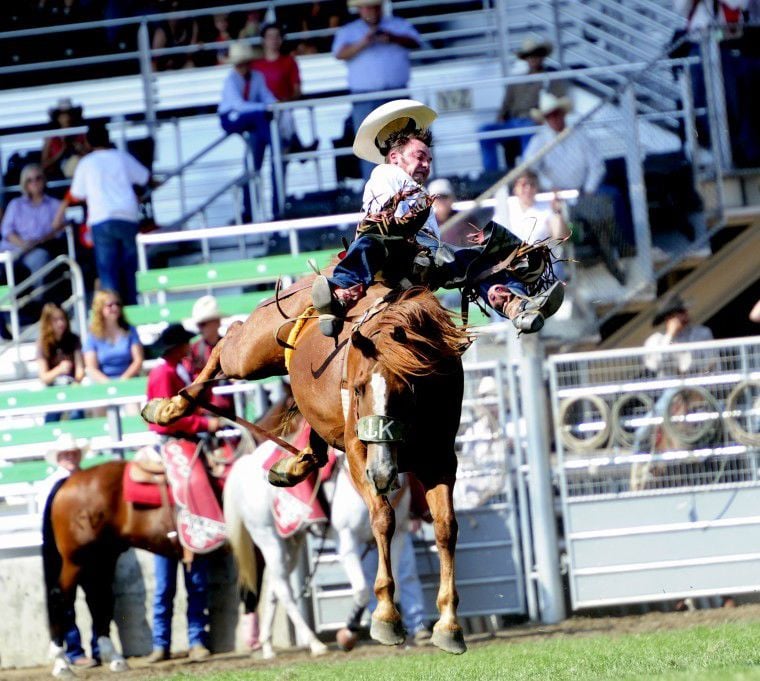 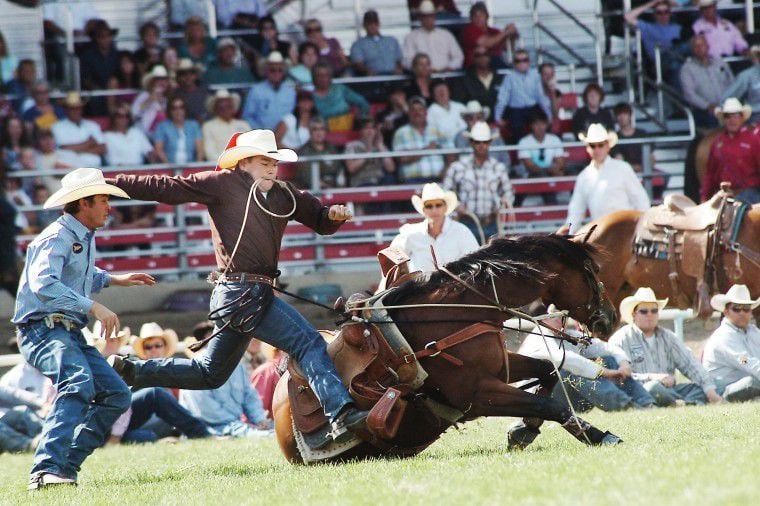 <p>Matt Shiozawa of Chubbuck, Idaho, leaps from his horse as as it fall to the ground after getting tangled up in the lasso during calf roping Wednesday at the Pendleton Round-Up.</p> 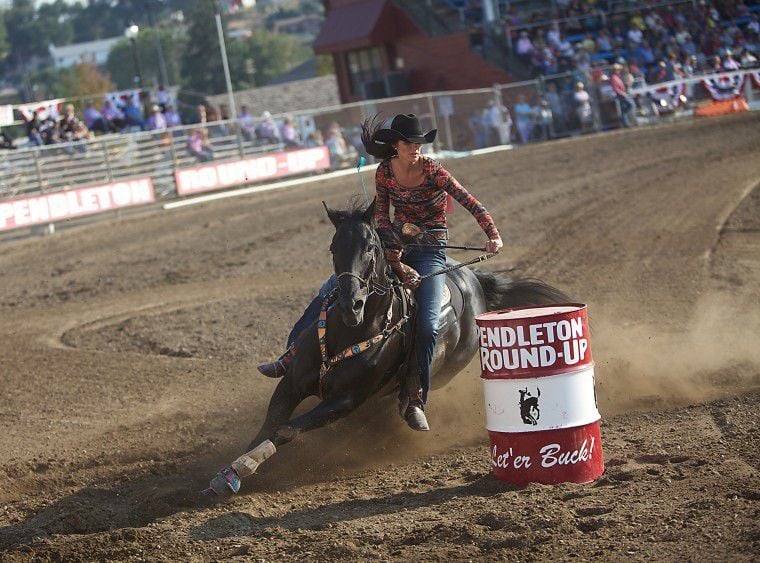 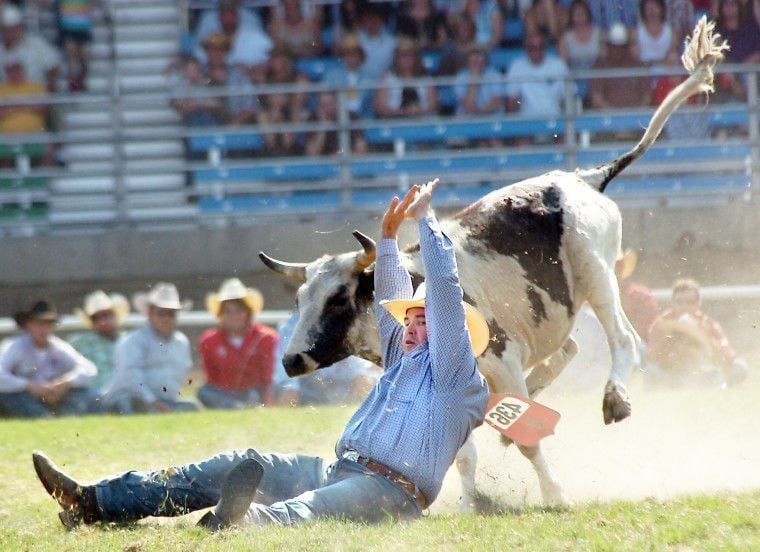 <p>Dru Melvin of Ronca City, Okla., throws his hands in the air after missing the mark during steer wrestling Wednesday at the Pendleton Round-Up.</p> 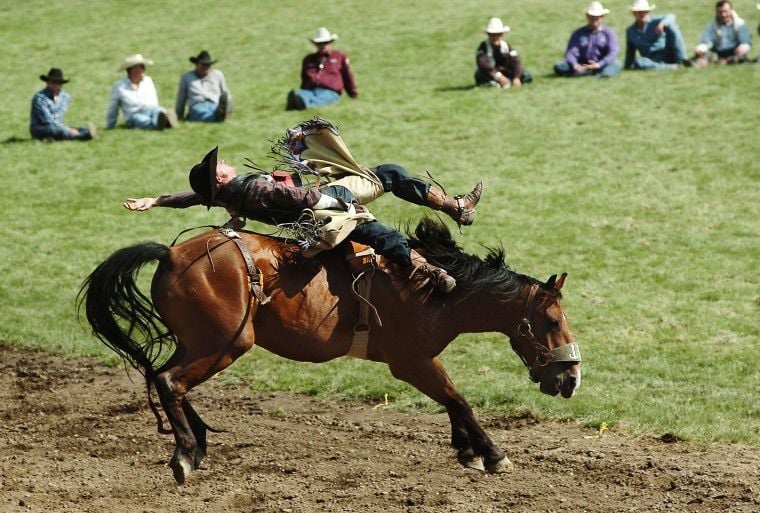 <p>Cody Teel of Kountze, Texas, rides Due North for 86 points in bullrriding in Teel's first appearance Wednesday at the Pendleton Round-Up.</p>

<p>Matt Shiozawa of Chubbuck, Idaho, leaps from his horse as as it fall to the ground after getting tangled up in the lasso during calf roping Wednesday at the Pendleton Round-Up.</p>

<p>Dru Melvin of Ronca City, Okla., throws his hands in the air after missing the mark during steer wrestling Wednesday at the Pendleton Round-Up.</p>

A?pair of newcomers made a major splash in their first experience with the Pendleton Round-Up in Wednesdays opening performance.

Barrel racer Nikki Steffes claimed the top spot in her event while bull rider Cody Teel is a strong candidate for Saturdays short round.

Steffes closed out the barrel racing section with a blistering 28.55-second time that moved her ahead of Nicole Deason (28.61) for the long-round lead.

It was just really fun,?she said. Ive never been here but I was just going to run as hard as I?could until I?got to the dirt, so it was very fun.

Steffes said her 6-year-old mare Vanilla has plenty of experience running on grass so she wasnt worried about the famed Pendleton infield.

I?really wasnt because my family has a ranch in western South Dakota so shes been rode out in the pasture a lot and so I?really wasnt concerned about running across the grass, she said.

Teel also got his first taste of the infield after an 86-point ride on Corey &?Horst Rodeo Companys Due North that was the highest score in the first section of bull riding.

I?didnt figure my bull was going to be out there, he said. Hes usually right there by the gate and the bucking chutes. Its pretty cool.

The first time walking up there and looking out, its something different.

The PRCA?rookie said hes hoping Pendleton can help him extend his season.

Im about 25 right now up there in the rookie standings so the last stretch Im trying to pull something off and make the finals,?he said. This helps.

Teels score stood up until the very end of Wednesdays performance when PRCA?and PBR?No.1 rider Shane Proctor took it down with a 90 on Corey & Horsts King of Hearts in the second section of bull riding.

That bull, hes a really great bucking bull, he said. Thats the third time Ive been on him and he always tries his heart out. Hes going to buck jump about 10 feet in the air as high as he can get and then just keep coming with it. Hes always trying and thats why I really?like the bull.

Proctor made the short round in Tuesday nights PBR?event at Happy Canyon Arena and said this is just a normal work week for a bull rider.

Some guys here have been to 125 rodeos by now,?he said. Weve been getting on almost every day since the beginning of June. Days that I dont ride I get sore so its better for me to just keep going and keep riding. Its a lot of fun and thats why I?enjoy doing it.

The two-time Round-Up champion (2006, 08) didnt know much about his draw but said knowledge of a horses tendencies can be overrated.

If you know one or have been on one you kind of, a little bit more know what to expect, he said. But you know things can change within a split second. You could have been on one a hundred times and it wont make a difference.

Jesse Bail took the lead in saddle bronc with an 87 on Sankey Rodeo Companys Domino Theory.

He said hes been looking to get back on that horse ever since his first attempt ended in a re-ride.

I did (draw her) once years ago and she turned out backwards with me and I?fell off,?he said. It was a long time ago and shoot, Ive saw it since a bunch of times and Ive wanted on her ever since. Shes always been an awesome horse and I?was just tickled pink to have her because I knew I had a good one.

Bails score should be a lock for the short round, giving him a shot at his second Round-Up saddle bronc title. He is No. 8 in the PRCA?standings and also won Cheyenne Frontier Days this year.

In steer wrestling, Ben Schofner claimed the early lead in the average with a 6.1-second time for the fastest of the performance. Tommy Cook leads Round 2 with a 5.4 he clocked in Wednesday mornings slack.

It is Schofner's second trip to Pendleton, four years removed from a College National Finals Rodeo title. He said the best thing he was able to learn from his first time at Pendleton was to be patient.

He hasnt been lollygagging, though, and owns the average lead at 11.4 on two head after winning the first round in slack.

Ive drawn real good, he said. My first one, somebody placed on him in the round in Ellensburg and my steer (Wednesday) ... hes just a good honest steer. 

The roping events did not fare well in Wednesday's performance round.

Only one of those was good enough to get its owners a chance at some solid money  a 5.9-second time by team ropers JoJo Lemond and Austin Adams.

It sticks them first very early in Round 2 and gives them the average lead with 17.7 seconds on two head.

Shane Hanchey leads the tie-down roping average with 19.2 on two head and Ryle Smith put up an 8.6 in the morning slack that leads Round 2.

Casey Tillard has the steer roping average lead at 30.9 on two head while Chet Herren leads Round 2 with a 14.0.