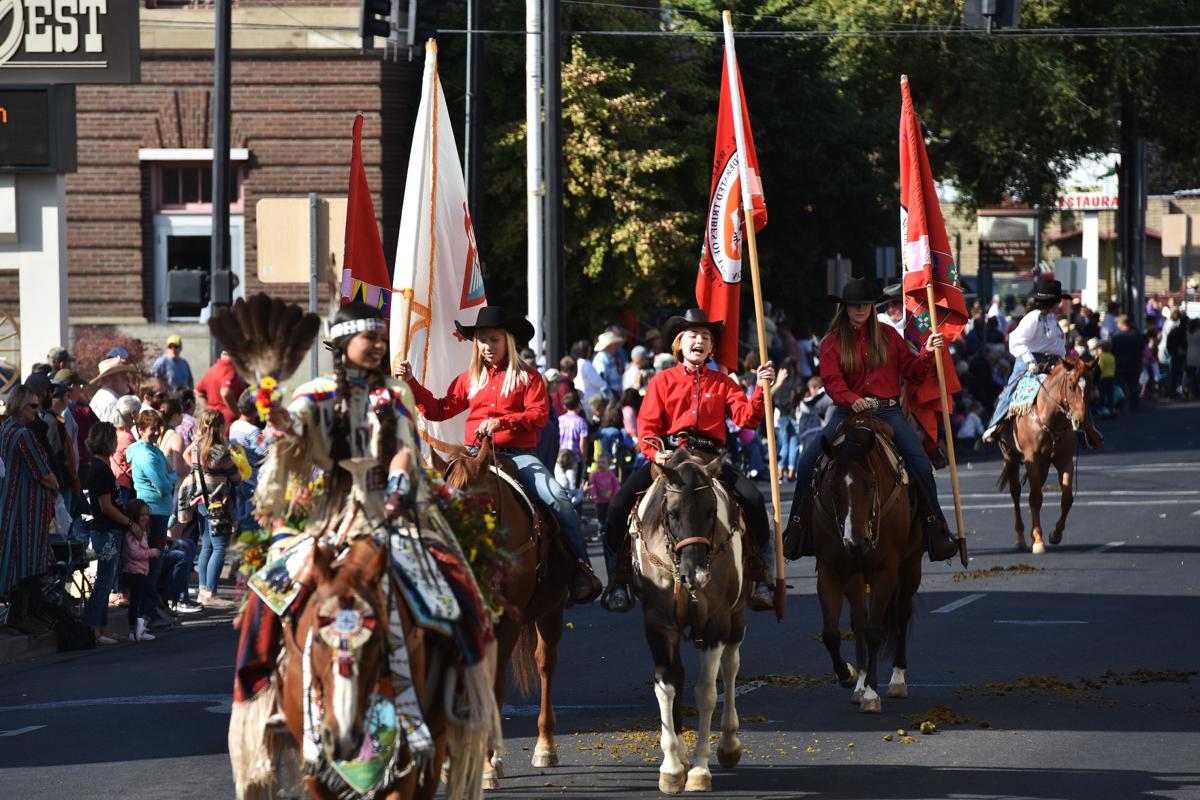 Brooke Harley, 12, from Athena, center, yells at the crowds while riding with the Round-Up pennant bearers during the Westward Ho! Parade on Friday in Pendleton. 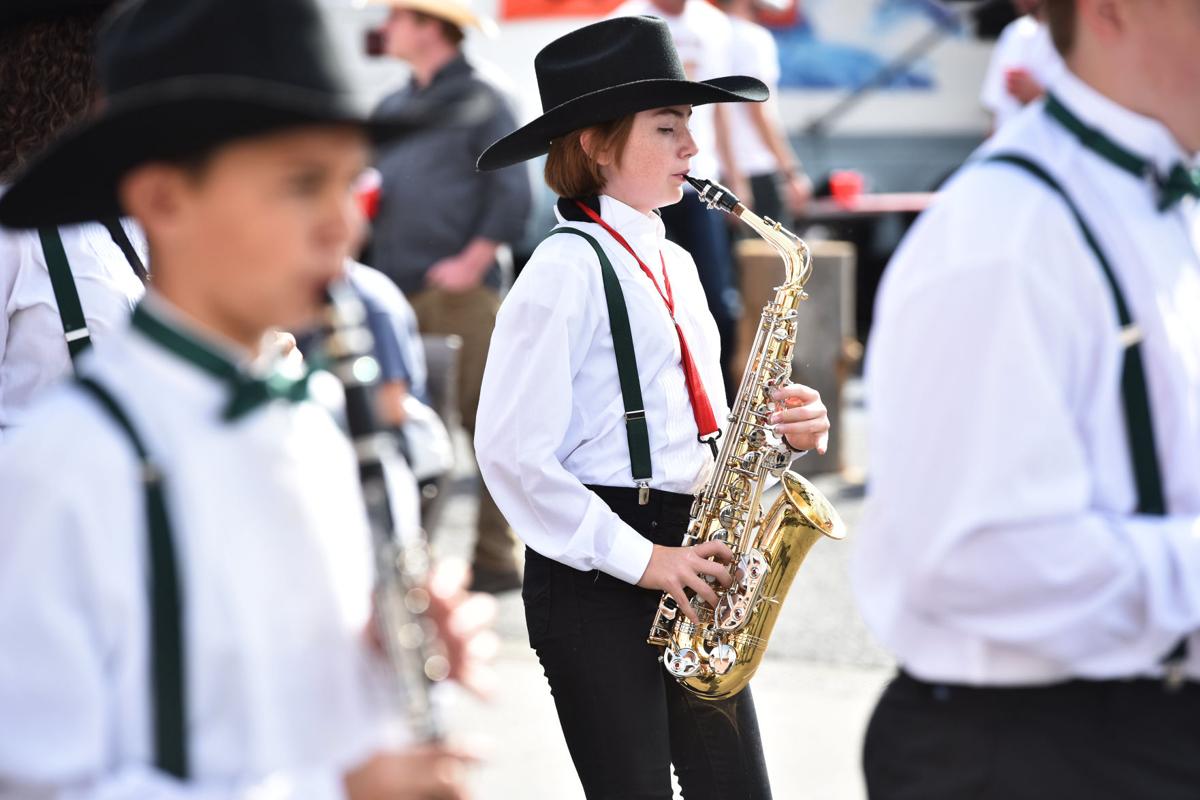 Brooke Harley, 12, of Athena marches with the Helix Junior/Senior High School marching band in the Westward Ho! Parade on Friday in Pendleton. 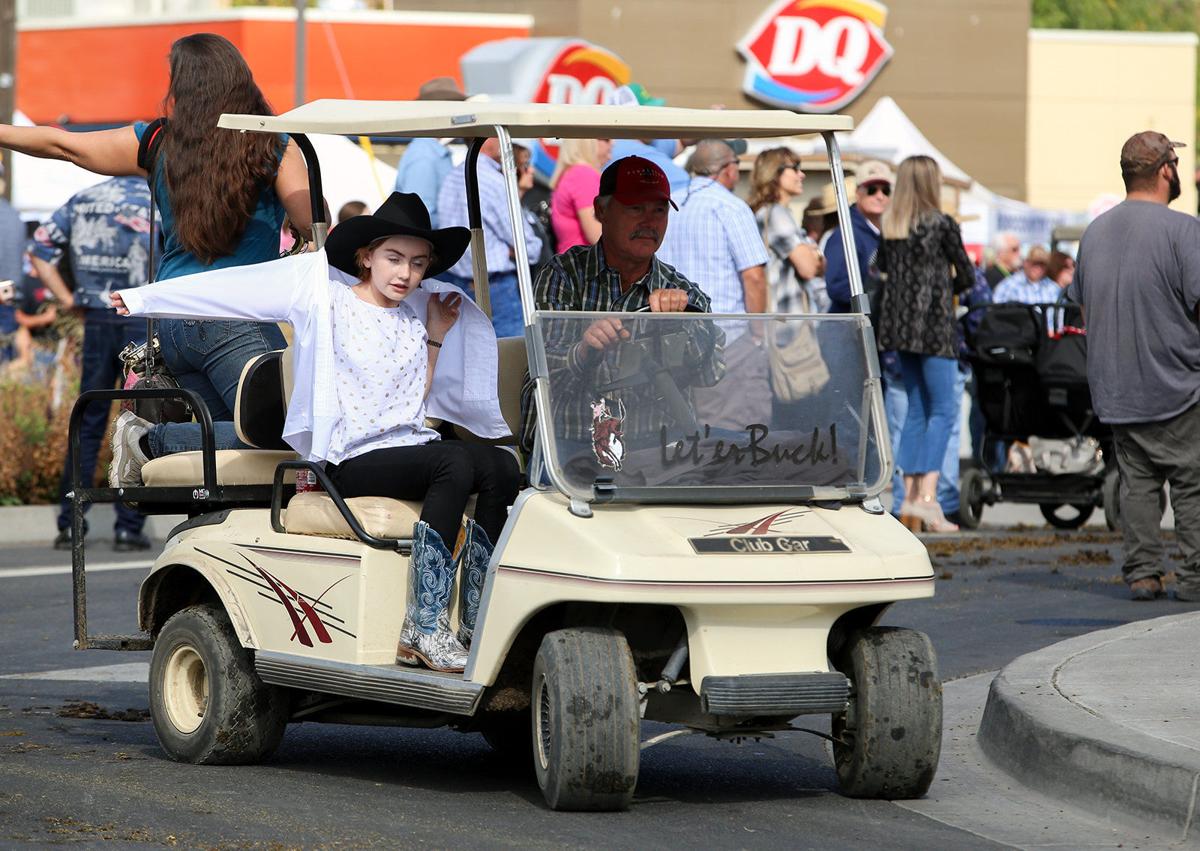 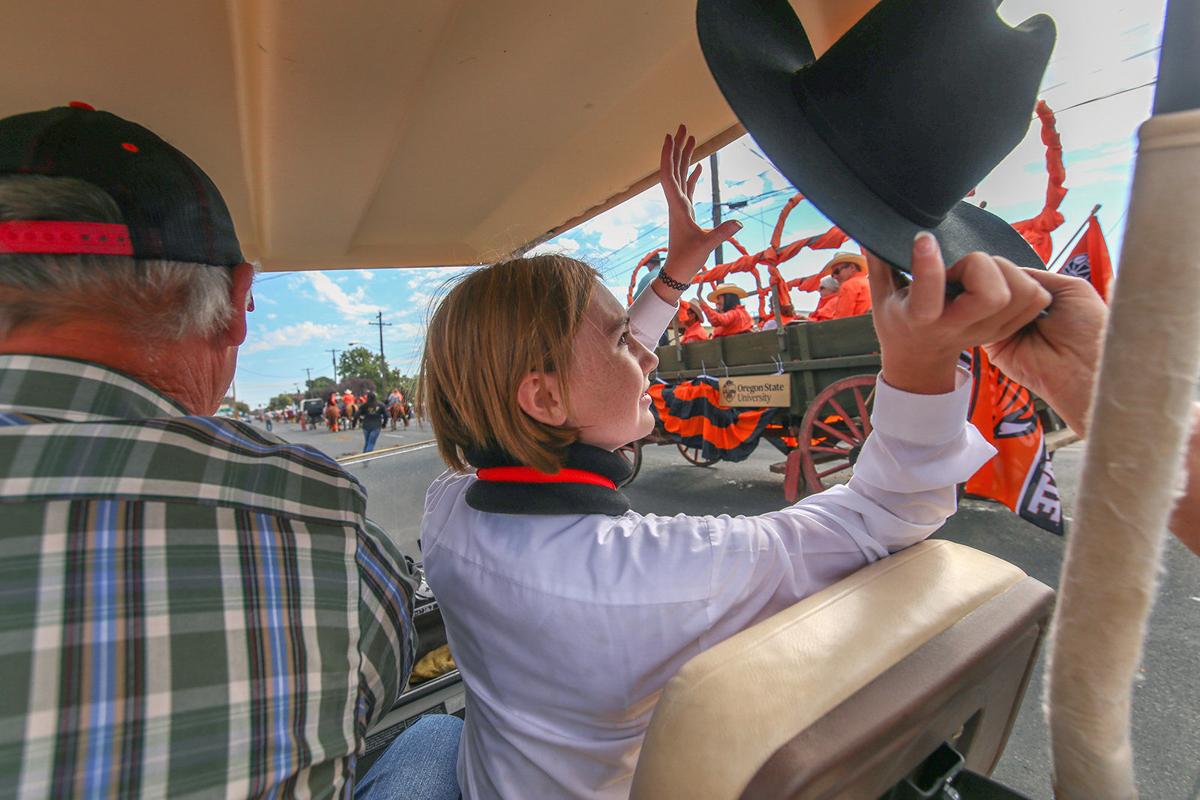 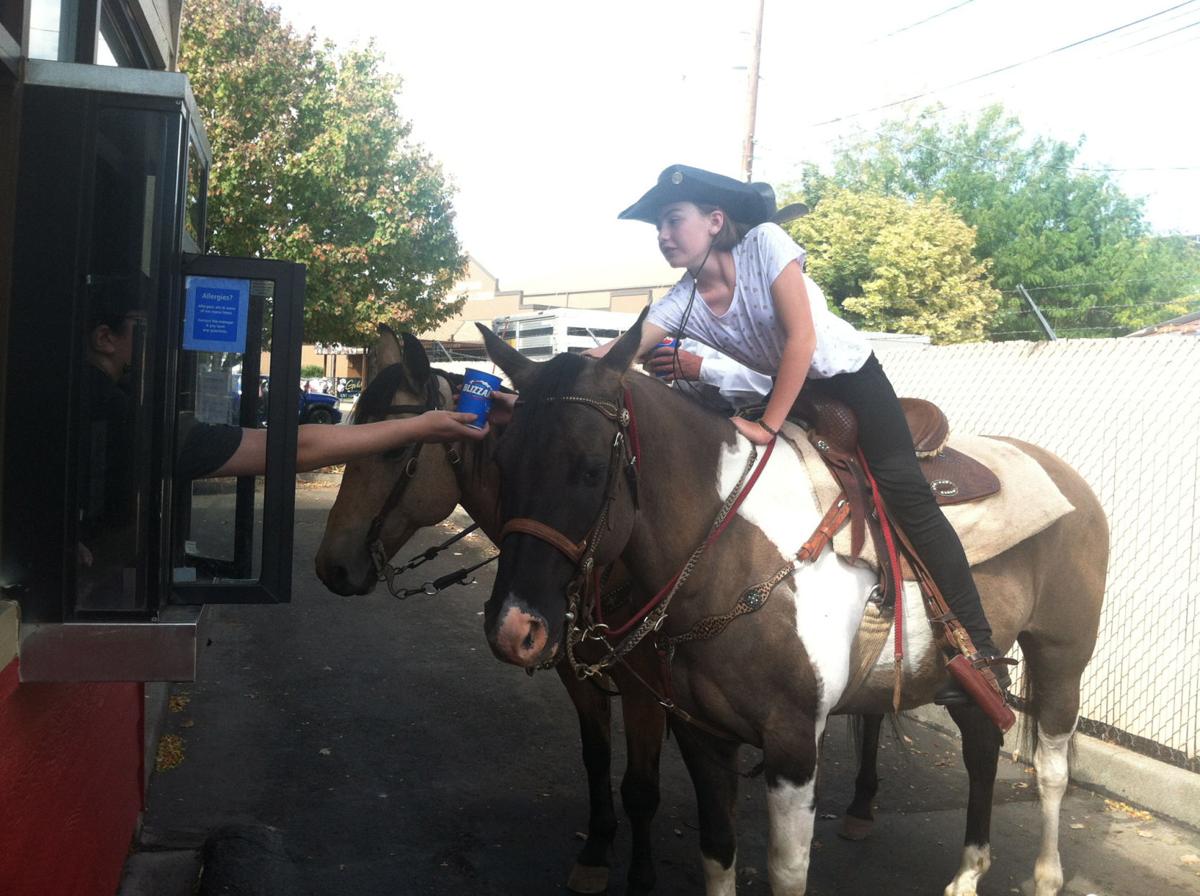 Brooke Harley grabs an ice cream from atop J Rock at the Dairy Queen drive-thru as a part of her family's post-Westward Ho! tradition.

Brooke Harley, 12, from Athena, center, yells at the crowds while riding with the Round-Up pennant bearers during the Westward Ho! Parade on Friday in Pendleton.

Brooke Harley, 12, of Athena marches with the Helix Junior/Senior High School marching band in the Westward Ho! Parade on Friday in Pendleton.

Brooke Harley grabs an ice cream from atop J Rock at the Dairy Queen drive-thru as a part of her family's post-Westward Ho! tradition.

The Westward Ho! Parade has been pulling off a trick right before the thousands of people who line Pendleton streets, and it goes virtually unnoticed.

At the head of the parade that starts in front of Pendleton City Hall, 12-year-old Brooke Harley of Athena rides her horse J Rock as a pennant bearer. And as the last groups pull by the Round-Up Grounds as the parade ends, Brooke’s there, again, playing in the Helix Junior and Senior High School marching band.

There’s no sleight-of-hand, body doubles, or other illusions needed to make this trick happen. Just layered clothing, a golf cart, and a lot of hustle.

Brooke has been a pennant bearer since her mom signed her up when she was 6 years old.

Now a seventh-grader, Brooke grew to like the people she rides with and she loves sitting atop J Rock, who’s grown up alongside her.

So the Harley family was a little crestfallen when they learned there might be a conflict that would prevent her from pennant bearing last year.

Helix Junior High requires all students to play in the marching band, which is a mainstay at Westward Ho! Concerned that missing the marching band would affect her grades, they considered the possibility that her flag carrying days would be over.

But when they told former Round-Up Parade Director Billy Lorenzen about their problem, he said it was possible to have her do both.

The parade staff would move the Helix band toward the back of the parade and provide transportation so that Brooke could get back to the band as soon as her pennant bearing duties were over.

Although the plan sounds simple enough, there’s a lot of moving parts that require a coordinated effort to get done.

In keeping with the routine, Brooke was on top of J Rock Friday morning with the flag for the Confederated Tribes of the Umatilla Indian Reservation, sandwiched between some of the biggest players at the rodeo like the courts for Happy Canyon and Round-Up and the Round-Up Board of Directors.

She was also under the watchful eye of her father, Jamey, who rode behind her.

As the cannon sounded and Brooke disappeared down Dorion Avenue, her mother Sam was by the Round-Up Grounds waiting for her daughter’s arrival.

When the pennant bearers finally finished their route, Brooke hopped off her horse and sped off on a golf cart with her mom and a volunteer back toward city hall.

Brooke was wearing her white band shirt underneath her red pennant bearing shirt, and it was Sam’s responsibility to help get the green suspenders and bow tie that comprised the rest of Brooke’s band uniform.

In the meantime, the Helix band moved from the parking lot behind city hall to the staging area on the 300 block of Southwest Fourth Street.

As he sprayed water into various band members’ mouths, Helix music teacher Jonathan Butler said Brooke’s double life was actually a boon to the band. Whereas the band never used to know where in the program they will march, Brooke’s unique situation means they’re always guaranteed the last spot among marching bands.

As the Helix band gets into position, Brooke seemingly appears out of nowhere, in uniform and with saxophone. She gives Butler a thumbs up and steps into her spot in the formation.

“She came in a golf cart?” one of her classmates asks incredulously.

Sam fusses over Brooke’s suspenders and hair right up until the band starts marching onto Dorion Avenue. And then she does the whole mile-and-a-half parade route again on foot.

Lorenzen has volunteered at Westward Ho! for 13 years and doesn’t know of anybody else who has done the route twice in the same parade. She’s definitely the first to do both pennant bearing and marching band back-to-back.

“This is one of those little unique things that makes the parade awesome,” he said.

Lorenzen admitted that it was his idea to have Brooke go through the parade route twice, but he gave credit to parade volunteers Tami Sunden, Mike and Janet Herbes and Casey Currin for assuring that the process goes smoothly.

The Helix band plays one last rendition of the theme from “Raiders of the Lost Ark” as they pass the Round-Up Grounds, dispersing once they reach the Mac’s Bar and Grill parking lot.

Brooke said she’s tired and sweaty, but any signs of exhaustion doesn’t prevent her from partaking in a personal tradition.

After each Westward Ho! ends, Jamey and Brooke take their horses and order some ice cream at Dairy Queen.

Brooke hops back on J Rock, and father and daughter proceed through the drive-thru, which is completely empty because the road is still closed for the parade.

As Brooke munches on her cotton candy Blizzard, she thinks she’ll continue to do both activities, even after she ages out of the music requirement in high school.

But when Sam jokingly asks if Brooke will do it forever, Brooke firmly shakes her head no.

Brooke’s double life will eventually come to an end.