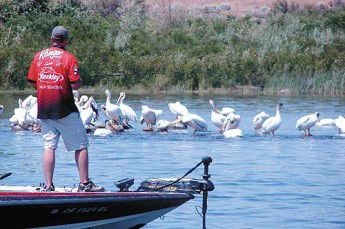 Cody Meyer, of Redding, Calif., fishes while a flock of pelicans rests on some rocks west of McNary Dam on the Columbia River Saturday during the final round of the FLW Series National Guard Western Division Columbia River Tournament. Meyer finished in eighth place. Staff photo by Matt Entrup 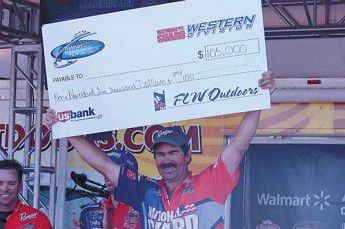 Cody Meyer, of Redding, Calif., fishes while a flock of pelicans rests on some rocks west of McNary Dam on the Columbia River Saturday during the final round of the FLW Series National Guard Western Division Columbia River Tournament. Meyer finished in eighth place. Staff photo by Matt Entrup

UMATILLA?- If ever there was a time and place for Neil Russell to get back on a winning track it was at the Columbia River stop on the FLW?Series bass fishing National Guard Western Division tour.

Russell had two prior top 10 finishes to his name on the river, and added a third when he took the lead into Saturday's short round.

But a 13 pound, three ounce haul by Island City angler Cody King kept the Nampa, Idaho, fisherman in suspense as he waited to see just how much he had made for his four days and 36 hours of fishing.

Russell needed his final five fish to weigh out heavier than 10 pounds, five ounces. When it was finally revealed that he had just beaten that mark with 10 pounds, nine ounces, Russell pumped his fists in the air in celebration of his $105,000 dollar payday.

The money certainly helps the pro angler, but just putting together four days of strong fishing was just as important.

"This makes me feel good about myself,"?he said. "The tour's been tough on me first year out there. I've got my confidence back and I'm ready to get back to the last tour event regardless."

Russell spent most of his time Saturday fishing the north bank of the Columbia down river from McNary dam. It was a strategy he hoped would pay off since many of his competitors went upstream.

Russell said he had spotted a shallow area in the river that wasn't on the map, providing hundreds of square yards of prime bass fishing real estate.

"They didn't know it was there so they left it alone,"?he said. "I?caught my big bass out there and I?caught every one out there today. It seemed like new ones were showing up there and I?executed really well. I?lost a big out there (Friday)?but I?went back and caught it (Saturday)."

King, who found out four ounces of bass is worth about $60,000 Saturday, finished in second place. He started the day in sixth place and weighed in fourth. As each of the anglers ahead of him failed to top his total, King sat calmly to the side of the stage. When asked if he thought Russell would top his total, King answered yes, adding he was just happy to be there.

King was one of the anglers that took the upstream route, and though video of the event will air Sept. 13 on Versus Country, the Union County fisherman would not reveal his favorite spots.

"You really need to know where to go in this system, backwater areas,"?he said. "Through fishing here over the years I've figured out where a few are. I went about 25 miles up river to a backwater area."

Kennewick's Ron Mace finished third for the week and the final round, working the spawning beds of the smallmouth bass upstream from the Umatilla Marina.

"It's the local knowledge,"?he said. "I was bed fishing all week. All the bass I?was catching you could see them bite, see them swim around."