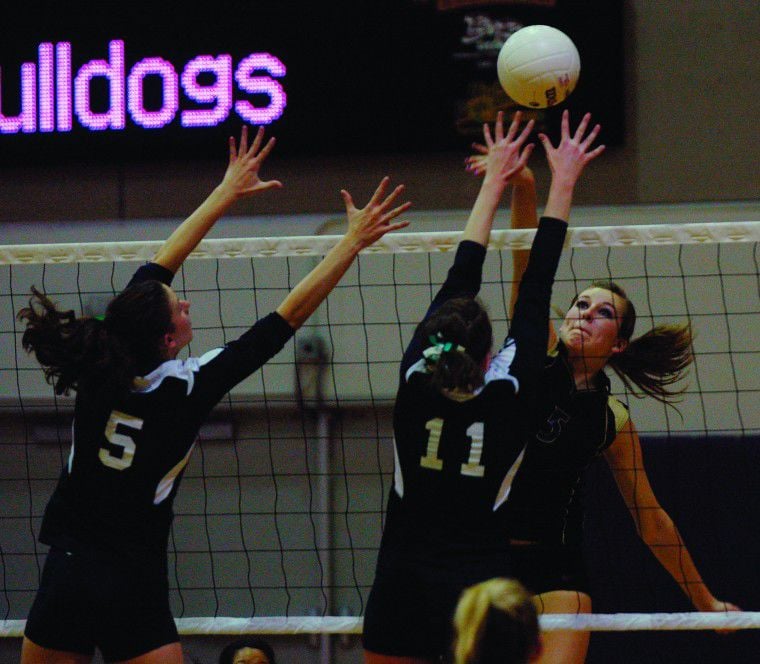 Hermiston's Crystal Schmidt goes for a kill while Marist's Amanda Robert (5) and Alexis Mollahan (11) put up a block Saturday in their Class 5A volleyball playoff game in Hermiston. 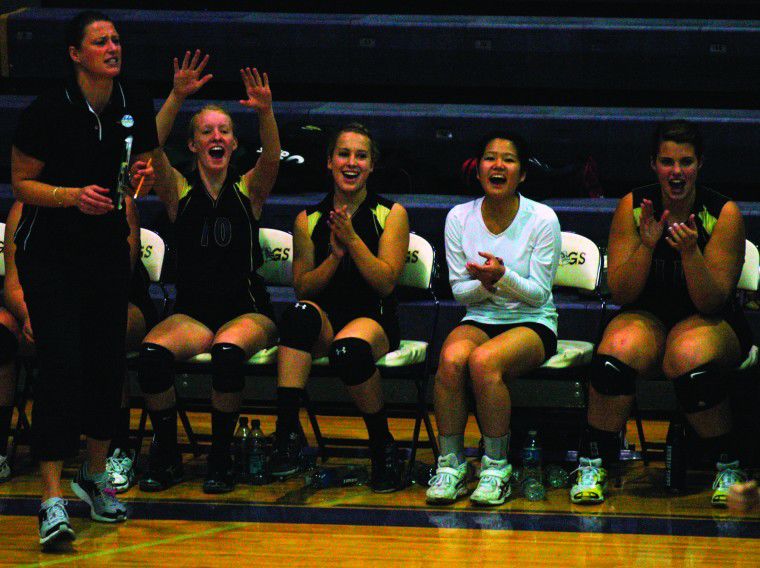 Hermiston coach Darci Wellsandt, standing, and players, from left, Courtney Stone, Mykel Liebe, Iyo Kishimoto and Darcie Alleman cheer after a point against Marist in the Class 5A volleyball playoffs Saturday in Hermiston.

Hermiston's Crystal Schmidt goes for a kill while Marist's Amanda Robert (5) and Alexis Mollahan (11) put up a block Saturday in their Class 5A volleyball playoff game in Hermiston.

Hermiston coach Darci Wellsandt, standing, and players, from left, Courtney Stone, Mykel Liebe, Iyo Kishimoto and Darcie Alleman cheer after a point against Marist in the Class 5A volleyball playoffs Saturday in Hermiston.

HERMISTON  The Hermiston volleyball season ended in the round of 16 Saturday as Marist pulled off the road sweep to advance to the Class 5A finals bracket site in Hillsboro.

Despite coming into the match ranked No. 7 in the OSAA rankings, it was apparent the Bulldogs were treading in new water as No. 10 Marist held off a 15-7 Hermiston run to close out Game 1.

The Spartans seized control of the match in Game 2 when they went on a 7-0 run following a timeout to take a 19-13 lead.

We werent getting the flow at all today,?said Hermistons Crystal Schmidt, who led the team with seven kills, two blocks and one ace. We were expecting (Marist)?to be very tough. We just didnt come out and play the game we should have.

Schmidt said their lack of playoff experience caused the team to play too timidly at times.

Once you start being less confident your body starts to tighten up,?said Hermiston coach Darci Wellsandt said. Physically you dont move as well.

Wellsandt said she was proud of her girls for climbing back into Game 1 but every time the Bulldogs started making a run in the next two games, unforced errors would halt their momentum.

(Marist) took the points we were giving them with gusto, Wellsandt said. They certainly didnt want to give them back to us.

Marist coach Shari Pimental said the last thing her team wanted to do was give Hermiston hope in front of a friendly crowd.

If you give a team any kind of momentum that can come back to haunt you, especially when its on their home floor,?she said.

Though the Dawgs finished their season short of their final goal, a trip to Hillsboro, the team was able to find the silver lining Saturday.

We accomplished almost all of our goals this year and thats something to be proud of,?said Moss, speaking of their Columbia River Conference title and 4-0 record against rival Pendleton. We still have one more year to go. One of our main goals is going to state.

The Bulldogs will lose two seniors this season, and although they are key contributors Darcie Alleman and Iyo Kishimoto, the core of the team will return.

Its really kind of the beginning for them,?Wellsandt said. These girls have put in a lot of hard work. As much as this loss hurts theyre still very proud of their season and Im very proud of the girls.