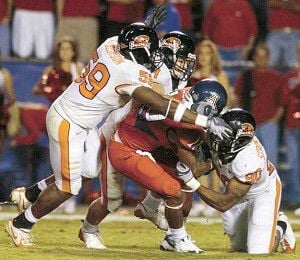 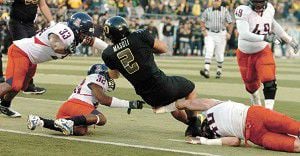 Oregon's quarterback Jeremiah Masoli (2) scrambles for a touchdown against Arizona's Ronnie Palmer (33), Nate Ness (32) and Brooks Reed (42) during the first half of an NCAA college football game in Eugene Saturday, Nov. 15.<BR><I>AP?Photo

Oregon's quarterback Jeremiah Masoli (2) scrambles for a touchdown against Arizona's Ronnie Palmer (33), Nate Ness (32) and Brooks Reed (42) during the first half of an NCAA college football game in Eugene Saturday, Nov. 15.<BR><I>AP?Photo

There's no doubt that this weekend's game between Oregon and Oregon State is one of the most significant Civil Wars in the history of a storied rivalry.

The Rose Bowl hasn't so definitely been on the line in the Civil War since the 2000 season, when the No. 8 Beavers knocked the fifth-ranked Ducks out of the New Year's Day game in Pasadena with a 23-13 victory. Joey Harrington threw five interceptions in the game.

There are many memorable moments - some good, some bad - in the rivalry that dates to 1894. (Oregon State, then Oregon Agricultural College, won the first one 16-0).

Key among them, from past to present:

Nov. 11, 1933 - Oregon 13, Oregon State 3. Oregon State's Ironmen and Oregon were undefeated heading into the game at Portland's Multnomah Stadium. The game is notable because of the so-called "Pyramid Play." An extra-point attempt by Oregon was blocked by Clyde Devine, who was lifted off the field by his teammates. The play was soon thereafter banned by the NCAA.

Nov. 23, 1957 - Oregon State 10, Oregon 7. On 4th-and-goal from the Oregon State 1-yard line, the Ducks decided against a potential game-tying field goal and went for the touchdown. Halfback Jim Shanley appeared headed for the end zone, but OSU's Nub Beamer, who had been blocked to the ground, reached up just as Shanley was about to cross the goal line and caused the most famous fumble in the series' history.

Nov. 23, 1991 - Oregon State 14, Oregon 3. Jerry Pettibone got his only win after 10 straight losses in his first season as Beavers coach when quarterback Ian Shields, playing with a broken big toe, scored on a 6-yard bootleg for the go-ahead touchdown.

Nov. 19, 1994 - Oregon 17, Oregon State 13. The Ducks entered the game tied with Southern California for the Pac-10 championship and needed a win to clinch their first Rose Bowl berth since 1957. Trailing 13-10, quarterback Danny O'Neil drove the team 70 yards, hitting Dino Philyaw for a 19-yard touchdown with 3:47 to play. The Ducks go to Pasadena, where they lose 38-20 to Penn State.

Nov. 21, 1998 - Oregon State 44, Oregon 41, 2OT. The first-ever Civil War to be decided in overtime was won on Ken Simonton's 16-yard run into the end zone. Considered by many to be one of the most memorable Civil Wars.

Last season the Beavers defeated the Ducks 38-31 in double overtime at Autzen Stadium, snapping a 10-game winning streak for the home team. Tied at 28 at the end of regulation, the two teams traded field goals in the first overtime before James Rodgers scored on a 25-yard run in the second to win it.

Ep. 194: The latest in Husker football recruiting and putting a bow on Nebraska baseball's run