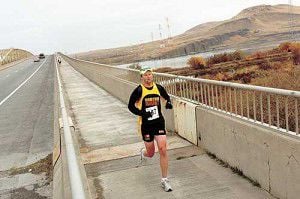 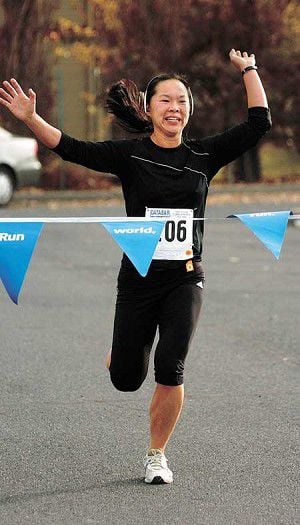 Michelle Barker of Tigard finishes first in the women's half-marathon of the Columbia River Power Marathon in Umatilla. Staff photo by Sarah Britain

Michelle Barker of Tigard finishes first in the women's half-marathon of the Columbia River Power Marathon in Umatilla. Staff photo by Sarah Britain

UMATILLA - The 62nd time was a charm for Athena's Eric Jensen at the inaugural Columbia River Power Marathon Saturday.

The marathon course crossed the McNary Dam into Washington, circled back over the Columbia River Bridge and followed the Lewis and Clark Trail to Hat Rock State Park before coming back down Highway 730 into Umatilla.

Jensen, 44, trailed Walchli, 46, nearly the entire race before getting sight of the 1980 Hermiston graduate as the course reached the highway for the home stretch. That's when Jensen made his move.

"When we were getting off the trail at Hat Rock I caught a glimpse of him up ahead, and I started thinking, 'Maybe I can catch him,' " Jensen said.

The cross country coach edged his way to the front and crossed the line first, clocking in at 3:42:17 to beat Walchli by just over two minutes.

Walchli, who made the Power Marathon the 199th of his career, said running on Highway 730 was difficult, as was the Lewis and Clark Trail up the river.

"It was rustic," said Walchli, who now lives in Woodinvale, Wash. "It was a lot more underdeveloped than I remembered, and a lot more sand than I thought there would be."

"The scenery was amazing and I actually like the hills so that was good," she said. "The trail part got to be pretty bad and it was a rough stomach day for me anyway, so it was a day to slow down. But I did like running across the river."

Phan is planning to run in the Tri-Cities Marathon today, which is hardly a stretch for her. The Maple Valley, Wash., resident has competed in as many as four races in a single weekend and said she's used to the conditions.

Two Hermiston men finished at the top of the half-marathon, Timothy Leque winning at 1:40:19 and Jose Ruelas finishing second at 1:41:47.

It was Ruelas' second marathon, the first coming a year ago in the Tri-Cities, and he said he was glad for the chance to run so close to home. He said the course was harder than the Tri-Cities with more hills, but he enjoyed the run and plans on being back next year.

The race's signature component is crossing the dam, and the Power Marathon is the first to gain access for a recreational event. Half-marathon women's winner Michelle Barker said that was the most exciting part for her.

"It felt like we were in some top-secret area," the Tigard resident said. "That was a lot of fun."

Barker and a handful of other runners from the Tigard area were invited to the race by Katie Hendrickson, who has family in Hermiston. The group doesn't generally run marathons - usually sticking to relays such as Hood to Coast and shorter distances - but both Barker and fellow Tigard runner Melissa Oldham said they enjoyed nearly everything about the day.

"It was a great half-marathon and a beautiful course," Oldham said. "With small town race the people are so kind and make you feel so welcome. (The cooks from the potato bar) came out and cheered us on and then came back in here and cooked us lunch. It was great."

"The price was awesome, the shirts and medals were great," Barker added. "It was well layed-out and a lot of fun."

A total of 106 runners finished the marathon and the organizers are optimistic about the event's first showing, with plans already being laid for 2009.

Watch now: Reimer says Huskers have 'a lot left in the tank'

Watch now: Three keys to a Husker win at Iowa