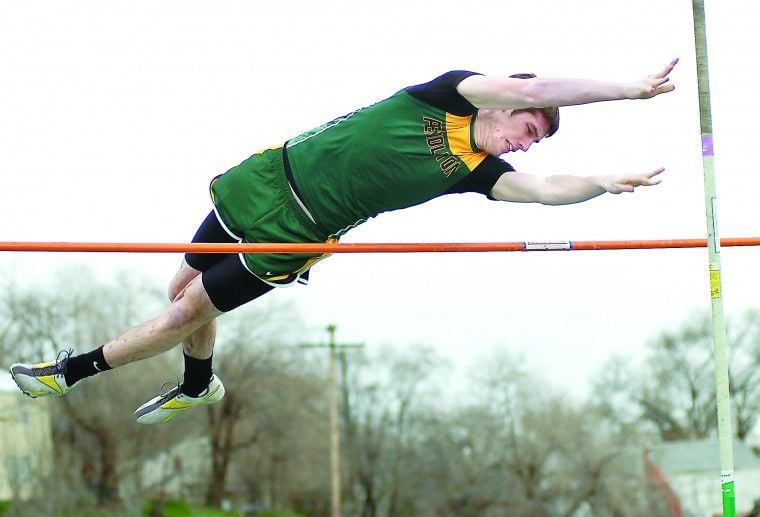 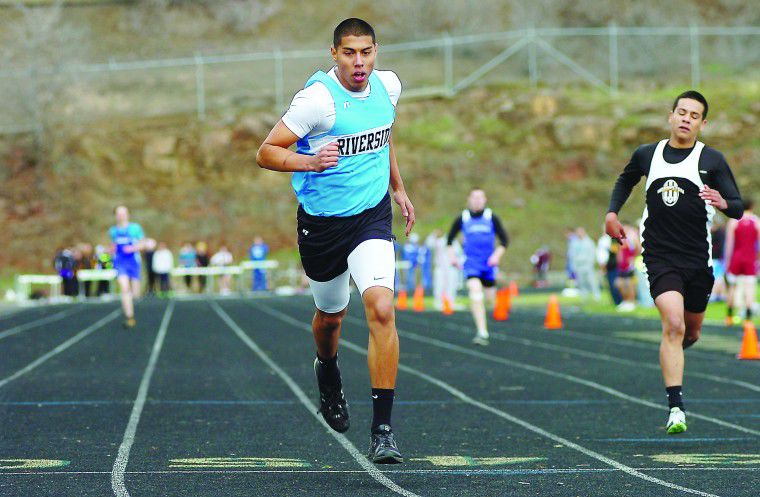 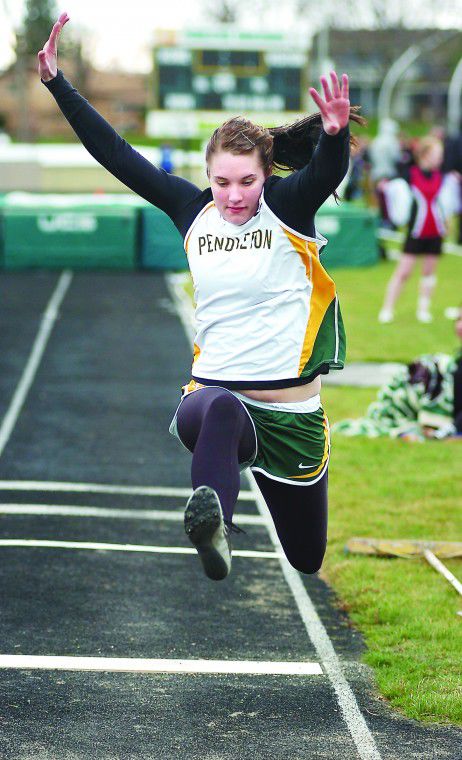 Pendleton sophomore Amanda Fowler competes in the triple jump on Thursday in Pendleton.

Pendleton sophomore Amanda Fowler competes in the triple jump on Thursday in Pendleton.

PENDLETON  Hermiston kicked off its season right at the 2011 Bucks Track Classic with a meet-best 10 first-place finishers on Thursday, while six area schools held their own in the 12-team competition.

I didnt feel like taking the lead today, but people were yelling at me to run faster and it motivated me to push it, Cisneros said.

If you run track and dont do cross country, thats kind of setting yourself up for failure, Juarez said.

My goal was to see if I could lead Nicole the whole way, Markwick said. Its kind of a love-hate relationship with us, but off the track were good friends.

Today I threw where I left off at state last year, Butler said. It was a good day and Im excited for our next meet to see if I can climb up a little higher.

Runner-up to Butler in the javelin was Jordan Connell of Riverside, who typically throws around 120 feet. A flu bug struck Connell this week, which she said kept her arm sore and limited her throw to 113-00.

In the girls 3,000-meter run, Hermiston continued its winning ways. Kayla Swarat (11:35.93) and Kelli Niederwerfer (11:47.04) claimed first and second, with times more than 20 seconds faster than the third place runner.

Hermiston freshman Mckenzie Byrd, who had ankle surgery on Oct. 19 to repair a chipped bone and cartilage, finished atop the girls high jump standings with a 5-foot leap. Pendleton rivals Xayna Robinson (4-10) and Amanda Fowler (4-8) took second and third.

I can only do a five-step approach, Byrd said. I cant run right now (and) thats why I fell really short.

Joining the list of 10 Hermiston victors was Karla Gonzales in the girls 100-meter dash. Gonzales won the event in 13.28 seconds, and teammate Ramona Faaeteete finish third in 13.75. Kayla Blankenship took the girls shot put with a thow of 34 feet, 9 inches.

The final two Bulldogs first-place athletes were Kaylee Pratt in the girls triple jump and Jose Macias in the boys 300-meter race. Pratt covered 33-04.75 of ground and Macias stopped the clock at 9:41.15. Second to Pratt was Pendletons Robinson (32-04.75) and behind Macias was Pendletons Ryan Montgomery (9:46.38).

In one of Pendletons most impressive performances, senior Tyler Zyph won the 800-meter heat in 1:59.89 after missing cross country season with a staph infection. He was about six seconds faster than Hermistons Oscar Contreras-Leal (2:05.78), and Buckaroo Lathan Alger was third in 2:07.39.

I had six Hermiston guys in that flight and we were chipping words back and forth, Zyph said. I felt strong, I felt good  pretty much back to normal now unless I hit a rock or something.

The final first-place Buck was Tasha Sitz in the girls pole vault. Her vault of 8 feet stood alone as teammate Rebekah Hippe tied five other vaulters by clearing a height of 6-6.

Pilot Rock was the only Class 1A school to claim a top finish at the meet. Sophomore Jason GrosJacques threw the javelin 154-07 to trump Mac-His Francisco Saldana (151-7) and Patrick McBee of Pendleton (151-6).

Standing at 6-foot-3, GrosJacques is a natural javelin athlete. He finished in eighth place at state last year and said that if he improves his technique, hell be tossing the stick about 10 feet further.

Mac-Hi senior Dillon Wagner finished in second place in the boys discus throw, posting a personal record 137-6. He was second to Jorden Osborn (141-10) of Baker.

I felt calm and happy, and I had a competitor (Osborn) to push me, which helped, Wagner said.

The second of three Class 1A schools competing, Echo had its best performances in the girls discus throw and shot put. Amanda Lancaster took second place in the discus (98-09.50) and Kirsten McCallum threw at 95-4. Lancaster also finished in third with a 32-10 shot put.

As for Ione, the Cardinals top boys finisher was Alex Rietmann with a 12.9 time in the 100-meter dash, good enough for third place. Beth Morter was fifth in the girls shot put at 31-8.

Thats not my PR overall, but its pretty good and especially for my first throw of the season, Morter said.

The final area school competing at the meet was Riverside. Besides Connells second place girls javelin finish, the Class 3A Pirates top finisher was Cinthia Morales taking fifth in the girls 3,000-meter run at 13:51.98. Francisco Velasquez ended tied for sixth place in the boys 100-meter dash (12.24 seconds) and Vincent Harrison was seventh in the 400-meter race at 56.95 seconds.