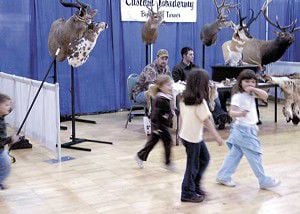 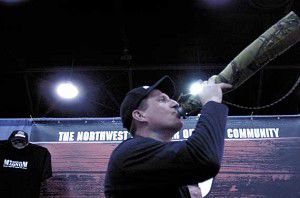 By the time the Eastern Oregon Sportsman Show hit its seventh hour Saturday at the Pendleton Convention Center it was evident it had been a long day for all involved.

As the remaining visitors meandered through the aisles of booths - some abandoned for the day - several vendors could be seen checking their watches like school children in detention.

Even the trout in the kids' fishing pond had had enough as young anglers could be overheard lamenting at learning the most important aspect of fishing - patience.

Except for a couple of strong hours during the afternoon, the consensus among vendors seemed to be that the show would continue its recent trend of declining attendance.

That's not to say there wasn't hope for today, though. With Sunday typically seeing a nice rush after church services let out, some of the vendors were confident this year's show still could be a successful venture.

One of those is Brody Turner of Custom Taxidermy in La Grande. Turner said he got a good deal of business from the show last year and was making some good contacts already this year.

On the opposite end of the spectrum, Jon Boyd of River King Outfitters in Walla Walla said he will be contributing to the exodus next year and only came this year because his plans to attend a show in Utah fell through.

Boyd didn't get any bookings for his Alaskan fishing and hunting business last year and wasn't high on his prospects this year.

"This one seems like there are less people here than last year; quite a bit less," he said, adding other shows he's been to are holding steady. "This time next year we'll be in Salt Lake City."

But even though the aisles may be a little wider and the booths a little longer than they seemed in years past, there is still plenty going on out the convention center.

The Safari Club International Foundation booth in the main entrance greets visitors with beautifully displayed hoofed trophies from around the world that would be right at place in any museum.

Then, just inside the doors to the main floor is a booth featuring the national award-winning art of Dave Bartholet, who actually creates new pieces as he mans his booth.

Bartholet's watercolor artwork is truly unique as it combines stunning detail on a variety of animals with chaotic and vibrant backgrounds that run toward the edges of the canvas.

An original piece is a considerable investment and even a print can be a bit pricey but the booth has enough pieces to hold one's interest for quite some time and cards and bookmarks featuring the images are well within anybody's price range.

The booth for Blue Mountain Wildlife was a popular gathering site as onlookers could have their picture taken with Ula the golden eagle for a small fee and see some other species at much closer range than any zoo.

Another booth seeing steady traffic was that of Northwest Big Game Inc., which had several sets of horns to score throughout the day. Measurer Tom Schillinger said there had already been a few that will be added to the Oregon record book.

The largest elk scored was a 327 bull and Schillinger said they'd had some non-typical mule deer bucks score in the mid to low 200's.

Schillinger has been to several shows throughout the Northwest and said the past season seems to have been decently productive one for the area's hunters.

"(The numbers) have been down a little bit but it's been good quality," he said.

Even though the fish in the kids' pond had quit biting by day's end, the ladies of Altrusa of Pendleton still could guarantee their visitors a catch in their first year running the "Hook a Book" booth.

In an effort to increase the number of children reading books, the booth allows youngsters to fish one out from behind a seascape curtain.

With another round of seminars planned for today, along with the drawings for the various raffles and door prizes, the Eastern Oregon Sportsman Show still has plenty to offer in the way of entertainment and education. The show will run from 10 a.m.-4 p.m.