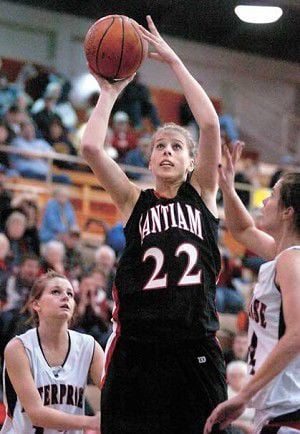 Santiam's Santiam's Heidi Halemeier shoot the ball guarded by Enterprise's Kayla Forster, left, and Tricia O'Leary in the Wolverines' win over the Outlaws Friday in Pendleton.<BR><I>Staff photo by E.J. Harris</i> 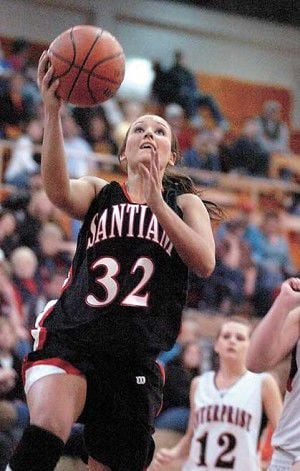 Santiam's Ashley Walczak drives to the basket during the Wolverines' win over Enterprise Friday in Pendleton.<BR><I>Staff photo by E.J. Harris</i>

Santiam's Santiam's Heidi Halemeier shoot the ball guarded by Enterprise's Kayla Forster, left, and Tricia O'Leary in the Wolverines' win over the Outlaws Friday in Pendleton.<BR><I>Staff photo by E.J. Harris</i>

Santiam's Ashley Walczak drives to the basket during the Wolverines' win over Enterprise Friday in Pendleton.<BR><I>Staff photo by E.J. Harris</i>

PENDLETON - With the monkey off their back after beating Portland Christian in the quarterfinals, the Santiam Wolverines put on a performance that has to make them the favorite to win it all in their 54-38 win over Enterprise Thursday.

They play Nestucca, which advanced due to great guard play, at 6:30 p.m. today but the Bobcats will have to get creative to try and stop 6-foot-1 Santiam post Heidi Halemeier, who scored 21 points on 9-of-12 shooting.

Halemeier didn't lead the Wolverines in the books, though, as guard Ashley Walczak hit three 3-pointers and was a perfect 9-9 at the charity stripe in compiling 26 points.

"I'm telling my girls, 'We have to stop those two girls,' " Enterprise head coach Mike Crawford said. "I'm sending a double team at Halemeier, you know when you do that you're going to open up somebody else. Those two girls both played great games (Friday)."

The Wolverines opened the game on a 9-0 run that featured six Halemeier points and a three-point play by Walczak. But Enterprise was able to find the one way to keep Halemeier in check as she went to the bench with her second foul at 3:08.

Tricia O'Leary hit both ensuing free throws to get Enterprise on the board and lift a shroud of timidness that had held them back during the first five minutes of the quarter.

Kayla Foster hit a long jumper for the first two of her 15 points with :40 left in the first to make it 9-4 and scored five straight in the second quarter to pull within 15-12.

But every time Enterprise pulled close, Walczak or Halemeier had an answer and quickly extended the lead back out. The Outlaws kept it close at the half, though, as Foster and Joscelyn Stangel hit back-to-back three's to make it 22-18 with 1:46 left in the half.

Foster scored another layup between Halemeier scores to make it 25-20 at the half.

"They answered everything that we threw at them," said Crawford, who also applauded the games of Foster and O'Leary, who had nine points, 10 rebounds, eight steals and was 4-5 at the free throw line.

"We had a chance," he continued. "It was a game, (Santiam) knew they were in a game. The only thing is they came out in that third quarter and lit us up."

Halemeier, who was 5-5 from the field in the first half, and Walczak each missed shots to open the third quarter but they were nearly automatic the rest of the quarter as the Wolverines outscored Enterprise 20-4.

At 6:01, Halemeier dribbled up court in transition and found Walczak in the wing for a long two. Walczak returned the favor on their next possession and Santiam stretched the lead to 31-20 before Enterprise got in the action with a Tonya Neil lay-in.

Despite a double team of O'Leary and Sarah Butterfield on Halemeier, she and Walczak were the only Wolverines to attempt a shot in the third quarter and the game was already getting out of hand by the time Walczak hit and NBA-range three-pointer with 42 seconds left in the third to go up 45-24.

"The second half we kind of always, I don't know what it is ... something happens," Halemeier said. "The third quarter is our quarter."

"I expected a little more focus on Heidi inside," Santiam coach Joy Lease said. "When she got the easy buckets early I felt pretty good about that because when she gets those looks good things happen for us."

At 6:11 in the fourth quarter Kara Stair became just the third Wolverine to score in the game with a layup. She finished with seven points on 3-4 shooting.

Enterprise's Crawford said their guaranteed finish of no lower than fifth still is better than their No. 6 ranking in the final coaches poll, but admitted such a lopsided loss could be tough for his team to get past.

"We don't have time to feel sorry for ourselves and we've got to come back and play (Saturday)," he said. "Honestly, it's not like we're happy to be here. We wanted to play in the finals and we got beat by a better team (Friday)."

For Santiam, which has been third and second the past two years, this year is looking like their turn at the title.

"Three days in a row is tough, we're a little banged up," Lease said. "But if we come out and do our thing we should be OK."