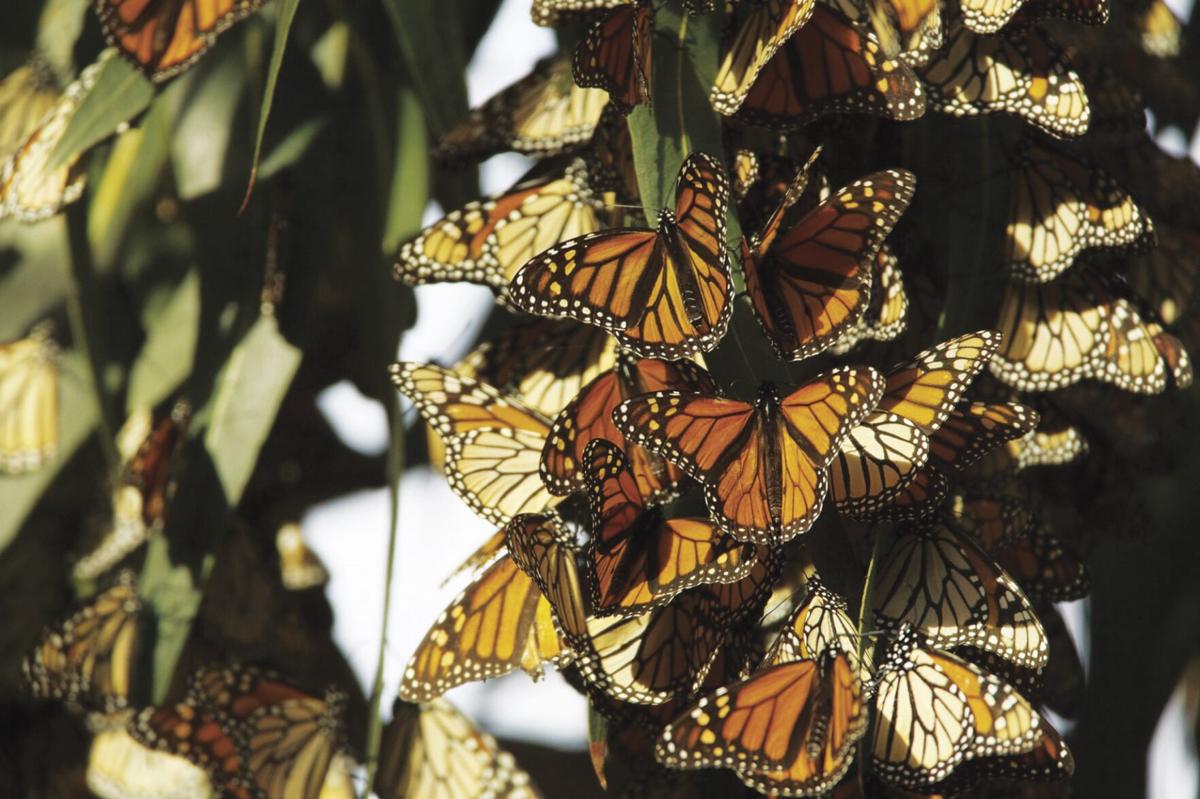 Monarchs clustered together on their winter hiver. 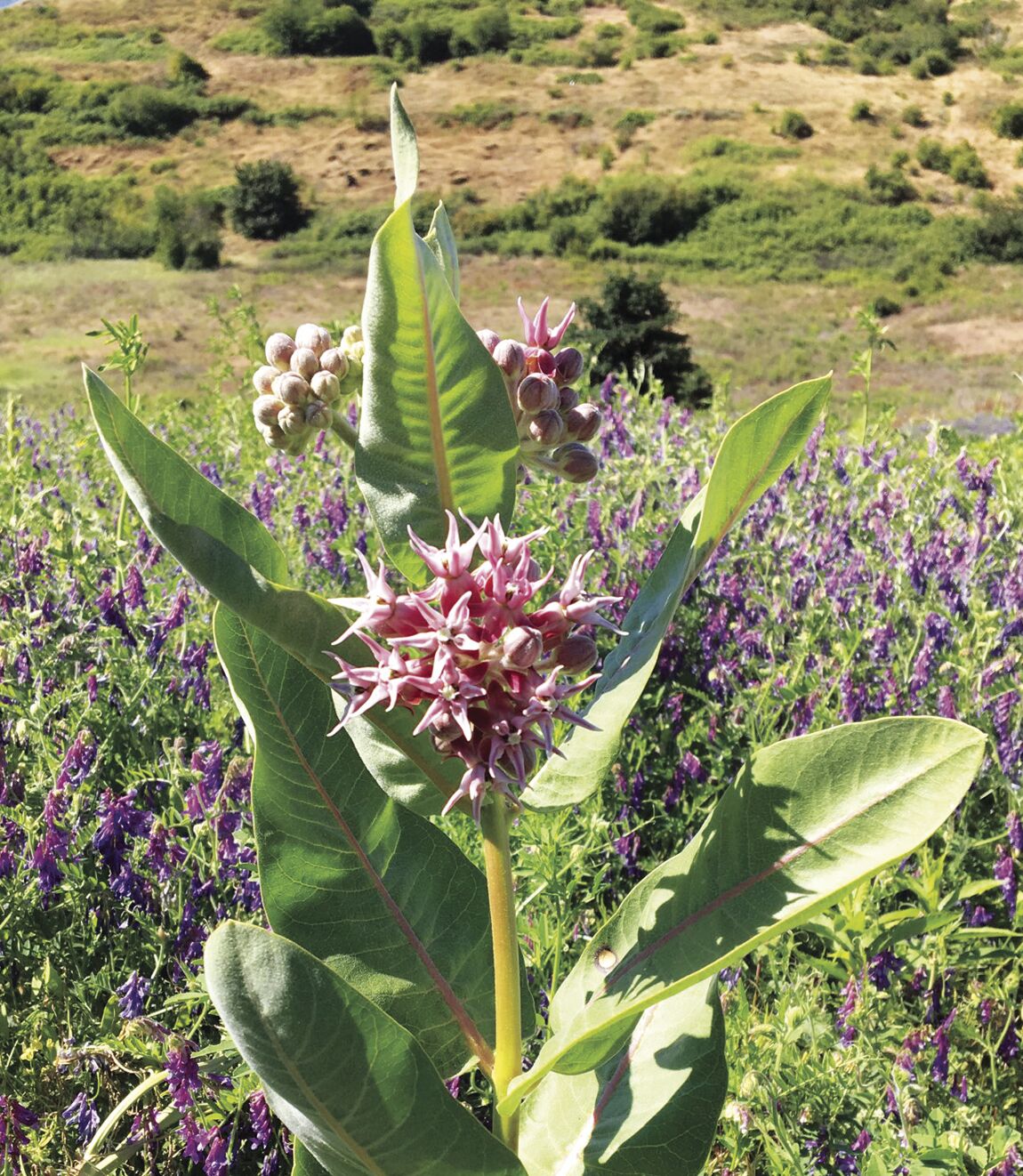 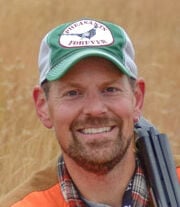 Monarchs clustered together on their winter hiver.

Growing up in the Shenandoah Valley, livestock pastures peppered the landscape. Black and red Angus, and Holstein to supply the dairies, were commonplace. Spring and early summer sprouted lush green fescue and stands of various weeds unbeknownst to me at the time, save for the patches of flowering thistle and milkweed, head-high to a 5 year old.

Back when youths were allowed to roam free, I would stroll across the county road and explore the neighbor’s pasture toting an empty Mason jar. I was fascinated with all things wild, to include the brilliant variety of butterflies and moths that frequented the fuchsia thistle blooms.

Standing motionless amid the spiked stalks, I waited for a butterfly to land and pipe the sweet nectar from a flower. Slowly reaching out, I delicately pinched its folded wings between my chubby fingers, admired the spectacle momentarily, then released them, similar to catch-and-release fishing. Occasionally, a new or particularly fine specimen would make its way into the jar to be added to an immaculately framed representation of our local species — tiger and pipevine swallowtails, common buckeye, Eastern tailed blue and painted lady to name a few. And, of course, the royal highness monarch with its orange and black hues. While monarchs rely on milkweed for reproduction, I found they visited the thistle nearly as often as the swallowtails.

Monarchs present a nationwide distribution as an iconic pollinator species. They display a fascinating behavior of seasonal migration, similar to songbirds. East of the Rockies, monarchs overwinter in southern portions of Florida and Mexico. In our neck of the woods, the winter “hiver” is the Southern California coast.

At present, a number of environmental factors, including the loss of milkweed habitat, are threatening monarchs across their range. A Feb. 25 article in The Guardian cited illegal logging and land use changes in Mexico as compounding factors in a 68% population decline on the winter hiver since 2018, and the population west of the Rockies is faring no better.

In 1997, the Xerces Society established the Western Monarch Thanksgiving Count, similar to the Audubon Society Christmas Bird Count, where “citizen scientists” document monarchs on their western winter hiver. According to Washington State University, the 10 million monarchs documented in the 1980s declined to 30,000 in 2018, and fell below 2,000 in 2020.

Dramatic loss of the western monarch population led to special interest groups petitioning the U.S. Fish and Wildlife Service (FWS) to protect the butterfly and their habitat with a listing under the Endangered Species Act (ESA). A FWS status review determined that “listing the monarch butterfly as endangered under the ESA is warranted but precluded by higher priority actions.” In other words, there are more than 100 imperiled species ahead of the monarch in need of FWS resources and protection.

Additionally, under the ESA, an insect species cannot be segregated into subpopulations like birds, mammals and fishes. Therefore, the FWS must consider the status of the monarch butterfly as one population across its North American range. If the western monarch were to be carved off as its own “distinct population segment,” its ESA listing priority would likely be much higher.

While it appears that our western monarchs are spiraling toward extinction, there is always hope and potential for recovery. Pheasants Forever, Quail Forever and the Xerces Society promote pollinator initiatives that benefit monarchs among other pollinators. Many Pheasants Forever and Quail Forever chapters are willing to cost-share on pollinator enhancement projects, like the Blue Mountain chapter in Walla Walla, Washington.

Additionally, two congressional bipartisan bills, the Monarch Action, Recovery, and Conservation of Habitat (MONARCH) Act, and the Monarch and Pollinator Highway Act, were recently introduced to avoid the extinction of the western monarch.

The MONARCH Act would authorize $62.5 million for western monarch conservation projects, and another $62.5 million to implement the Western Monarch Butterfly Conservation Plan, paid out over the next five years.

The Monarch and Pollinator Highway Act would establish a federal grant program available to state departments of transportation and Native American tribes to carry out pollinator-friendly practices on roadsides and highway rights-of-way.

But positive change does not require an act of Congress. Milkweed promotion in our backyards can benefit the western monarch. Research suggests milkweed patches as small as 2 to 5 square yards in area could be affective for increasing monarch reproduction. Patches that small are easily managed in a backyard flowerbed or garden, and the western native “showy milkweed” boasts a beautiful spiked ball of pink bloom worthy of any flower garden.

While recent legislation is late to the table for the western monarch, the potential for new conservation funds and our ability to act as interested citizens suggests hope for this iconic pollinator. Will the western population boast a success story similar to species like the greater sage grouse or bald eagle? Only time and a few congressional votes will tell.

Brad Trumbo is a fish and wildlife biologist and outdoor writer in Waitsburg, Washington, where he also actively serves the Walla Walla-based Blue Mountain Pheasants Forever chapter. For tips and tales of outdoor pursuits and conservation, visit www.bradtrumbo.com.