SALEM — Oregon on Thursday, Dec. 3, transitions from a COVID-19 freeze to a frosty list of new restrictions that will likely last into the start of 2021.

The Oregon Health Authority announced last week that a four-tiered "Risk Level" rating system would kick-in on Dec. 3, just as the freeze ended. 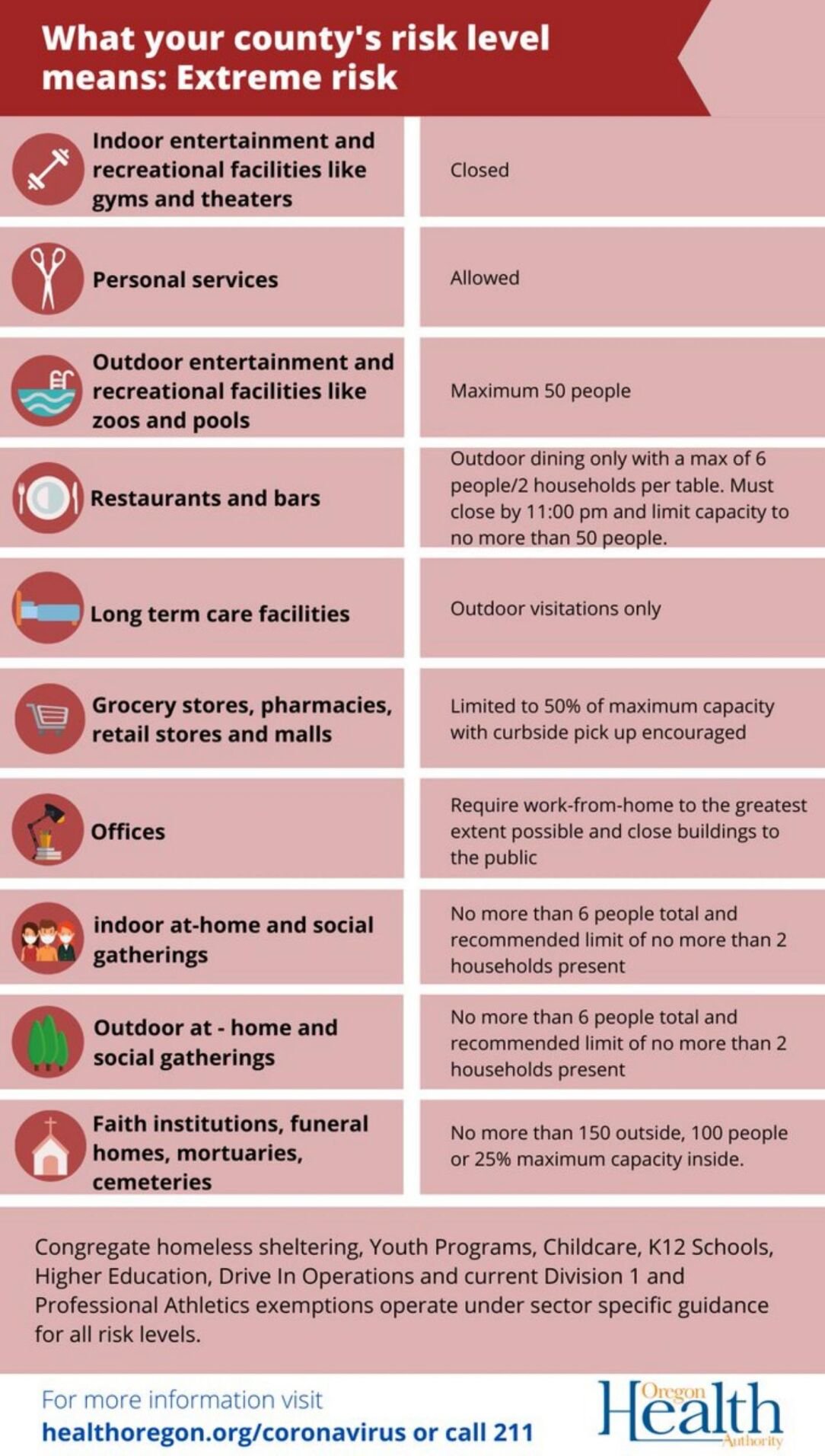 The most restrictive "Extreme Risk" list was released late Dec. 1 and includes 25 out of the state's 36 counties — four more than Oregon Health Authority officials had projected the week before.

"Counties that are facing extreme risk of virus spread will need to continue with strict health and safety measures, similar to the two-week freeze," Gov. Kate Brown said in a statement Dec. 2.

Five counties — Benton, Clatsop, Coos, Curry and Lincoln — are in the "high risk" category. Tillamook and Harney are counties rated as "moderate risk," while Gilliam, Sherman and Wallowa are "lower risk" counties.

"I want to stress that there is no 'zero-risk' category," Brown said.

The move came amid warnings the worst phase of the pandemic that's hobbled the nation since February is yet to come. Rapidly rising COVID-19 case counts and deaths will be compounded by a surge of infections from Thanksgiving and Christmas travel.

"December and January and February are going to be rough times,” Dr. Robert Redfield, director of the Centers for Disease Control, said Wednesday. "I actually believe they’re going to be the most difficult time in the public health history of this nation.”

Officials warn that already stressed hospitals could run out of intensive care unit beds and that available staff was stretched thin and have to be pulled out if they catch the infection themselves.

The past 30 days have accounted for 27% of deaths since the first death in Oregon on March 14.

At least three vaccines are nearing distribution. Britain announced Dec. 2 that it would start using a two-shot Pfizer vaccine to inoculate health workers as early as this week.

Final U.S. approval is expected by Dec. 15 and at least two other vaccines are right behind.

Vaccines will first go to medical workers and hospital staffs, then nursing home patients and their caregivers. It will likely be spring before all Oregonians who want the vaccine will be able to get one.

In the meantime, officials say the use of masks, social distancing and hygiene are the best tools to try to slow the virus.

Counties status will be reviewed once every two weeks and if there is progress, can move one risk level down for the following two weeks. There are two dates in 2020 when counties could switch levels: Dec. 17 and Dec. 31.

With cases rising and spikes expected from Thanksgiving and Christmas travel, it's most likely that risk levels are more likely to stay the same or go up. Last week, the state said it expected 21 counties to be at Extreme Risk when the program started Dec. 3. Since then, four more have been added.

If the don'ts far outnumber the do's on the Extreme Risk Level, that is the point. The restrictions are meant to tamp down the normal flow of activity that might spread the virus.

Most indoor group activity is barred during December, the coldest month of the year, for much of Oregon. More is allowed outdoors, but the reality is temperatures at noon on Dec. 2 included 29 degrees in Bend, 33 in Pendleton, 47 in Eugene and 53 in Portland. Astoria and Salem topped the list at a relatively balmy 56 degrees. Overnight lows are in the 30s across most areas between the coast and the Cascades, with swaths of central and Eastern Oregon in the 20s and teens. The temperatures will only drop as the year ends, with snow likely in many parts of Oregon.

Under the Extreme Risk Limit, gatherings are limited to six people from no more than two households. Advice: Meet the neighbors one set at a time.

During the pandemic, many workers have been unsure if they should stay home or clock in. Under the three less strict risk categories, employers are "recommended" to have staff work from home. At Extreme Risk, it is required. Offices are closed to the public.

If you do go to a restaurant, hope for heat lamps or firepits, because it will be outside.

If you can hold your exercise class or Christmas concert outside, you can have as many as 50 people participating and watching.

When the temperature drops as the state gets deeper into winter, either put up with the chill or shut down.

Entertainment? No dances or going to the movies (Hollywood isn't releasing much during the pandemic anyway.) Music clubs — jazz, rock, soul, classical or barbershop quartets, it doesn't matter. All closed. No museums — art, history, rocks and minerals, even the "One Flew Over the Cuckoos Nest" exhibit at the Oregon State Hospital Museum of Mental Health, all shuttered. If your town has an aquarium, it's fish only — no human visitors.

But watching "It's A Wonderful Life" on your TV at home or tracking Santa's progress on the NORAD radar website on the family laptop are allowed.

Sports — nothing indoors. Whether the game is pick-up, kids, high school or even college, all are outside or off limits.

Exercise? Think solo at home or no go.

Shopping has some leeway. Stores and malls should look at those maximum occupancy signs and keep the number of people to half — again, don't forget to count staff.

"Faith institutions" — churches, synagogues, mosques included — should be at 25 percent capacity or 100 total people, whichever is smaller. Outdoors, no more than 150. "Curbside pick-up is encouraged."

PENDLETON — Coronavirus cases are once again rising on average in Umatilla County, according to the county’s public health director and epidem…