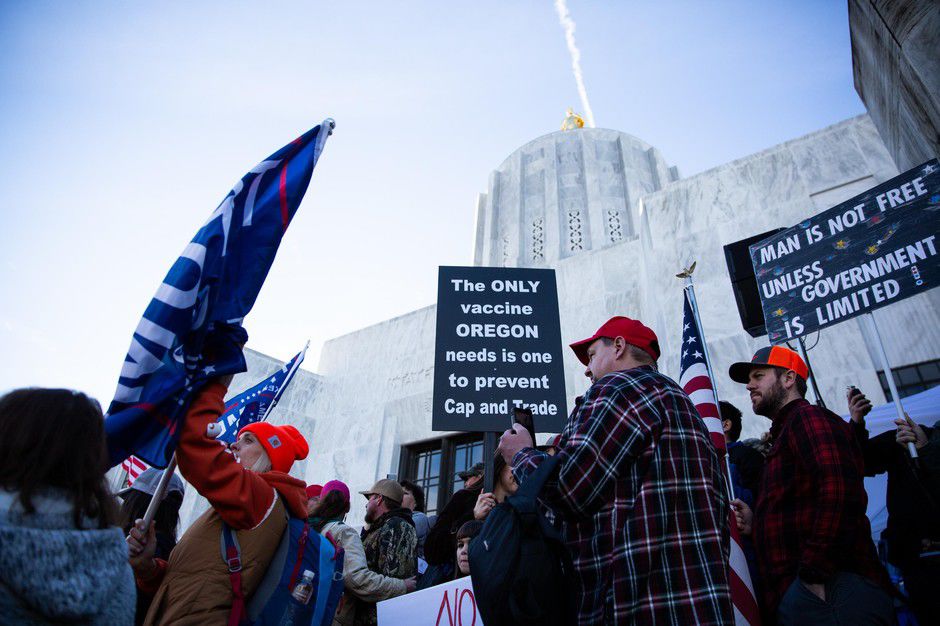 People hold signs at a Timber Unity rally in front of the Oregon Capitol in Salem in March 2020. The group was opposing cap-and-trade legislation aimed at reducing greenhouse gas emissions. 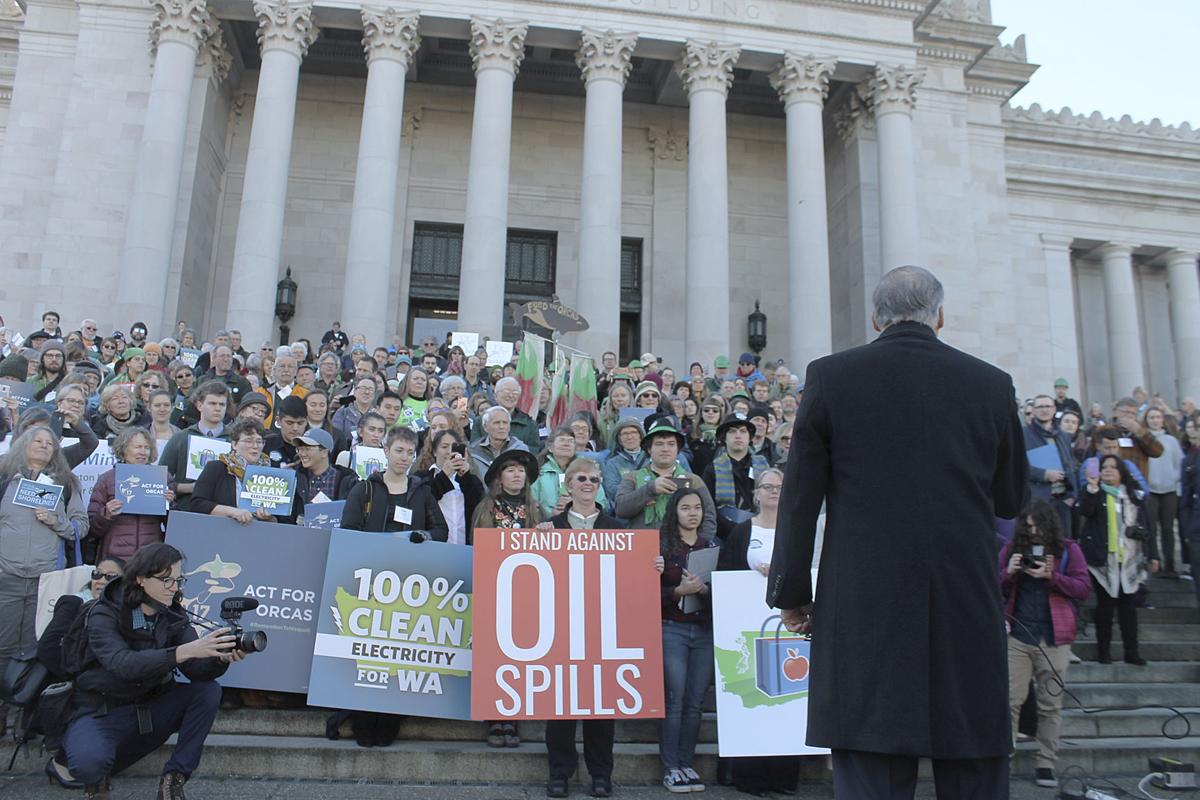 Washington Gov. Jay Inslee speaks to environmental activists on Jan. 29, 2019, at a rally on the Capitol steps in Olympia. A presidential candidate, Inslee has made climate change his signature issue and supports several bills such as cap-and-trade. 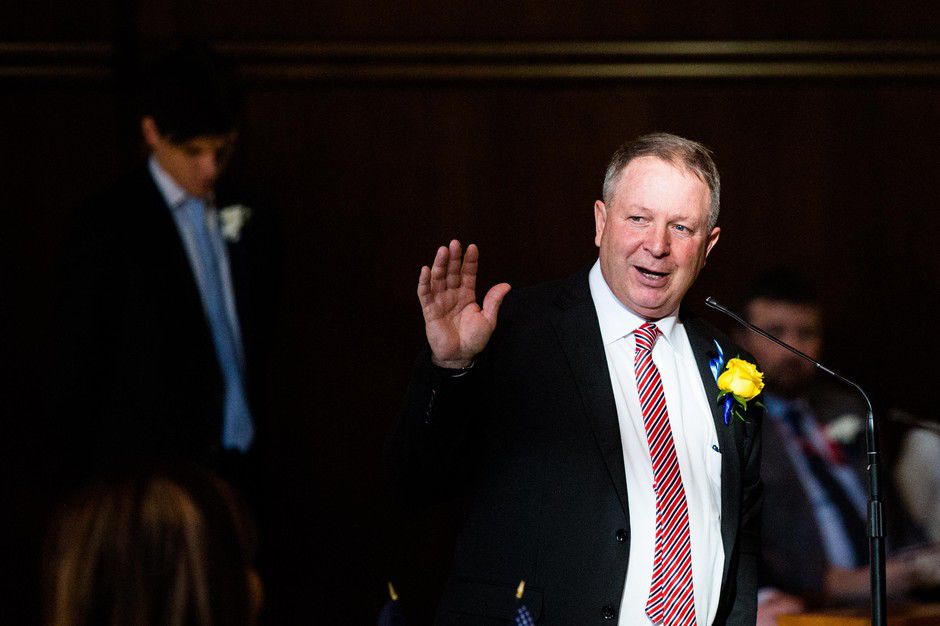 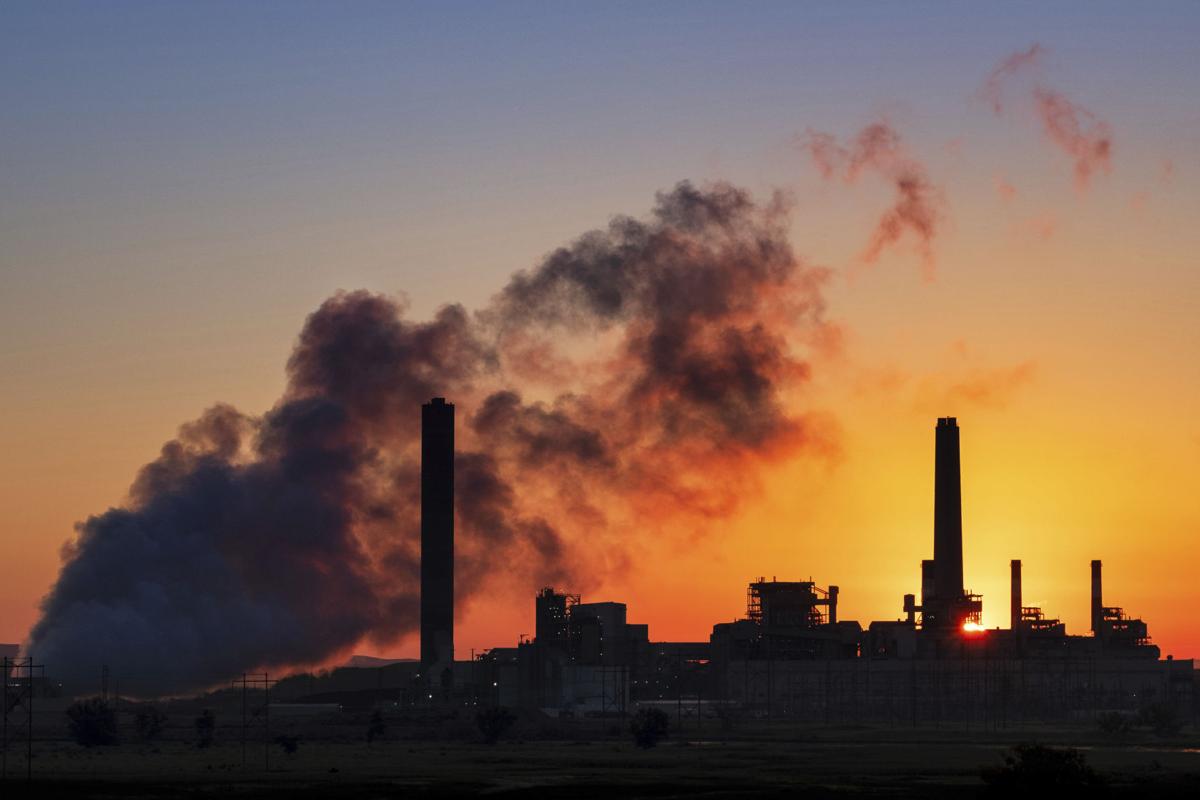 The Dave Johnson coal-fired power plant in Wyoming can be seen in this July 2018 file photo. 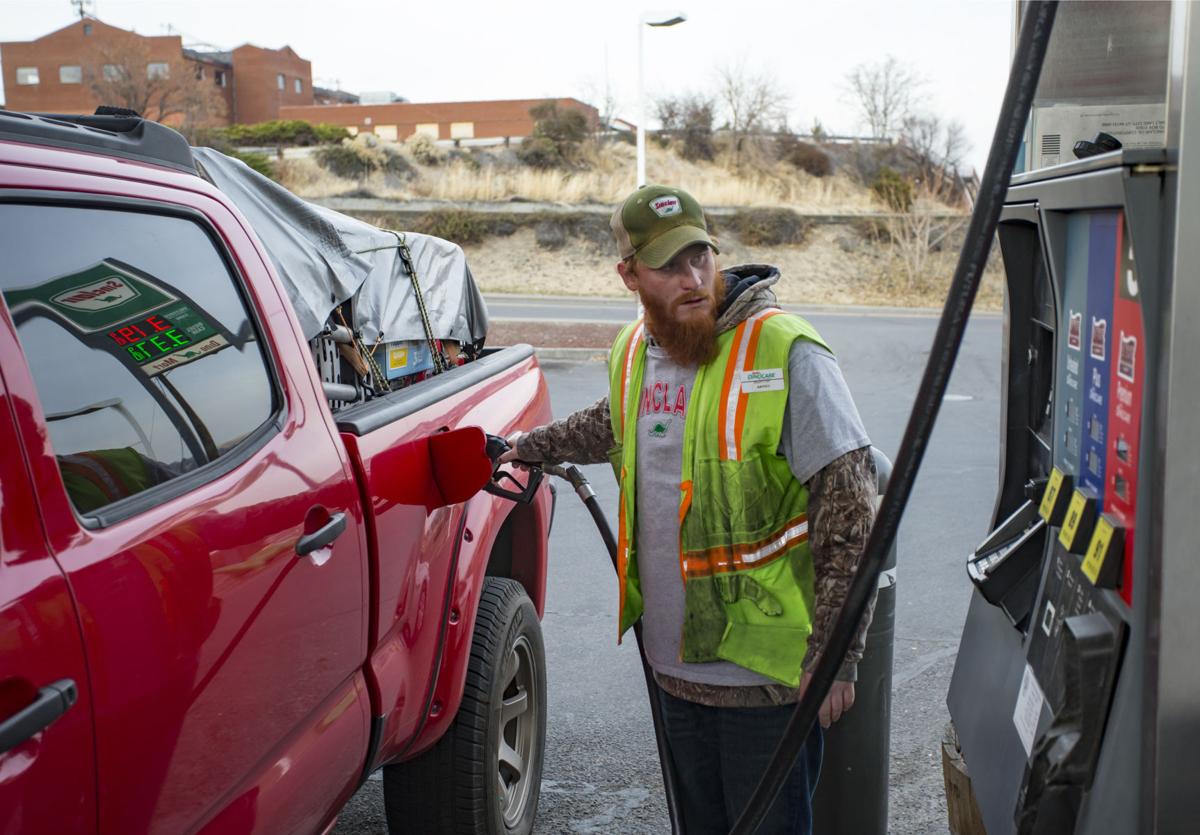 Aaron Roark pumps gas at the Sinclair station on Southgate in Pendleton on Nov. 7, 2019.

People hold signs at a Timber Unity rally in front of the Oregon Capitol in Salem in March 2020. The group was opposing cap-and-trade legislation aimed at reducing greenhouse gas emissions.

The Dave Johnson coal-fired power plant in Wyoming can be seen in this July 2018 file photo.

Aaron Roark pumps gas at the Sinclair station on Southgate in Pendleton on Nov. 7, 2019.

SALEM — In 2019 and again in 2020, Oregon Republicans walked out of the state Legislature to prevent a vote on cap-and-trade climate bills. The legislation was meant to drive down the state’s carbon emissions, but Republicans feared the bills would place the greatest burden of higher fuel prices on sparsely populated rural communities.

In 2008, the center-right party in British Columbia, actually named the Liberal Party, created a carbon tax to reduce emissions. More than a decade later, it has helped lower emissions without disproportionately hurting rural B.C. residents.

This year, climate legislation remains a tense topic of debate in the Pacific Northwest politics. Why has a carbon-pricing program worked in British Columbia but not in Oregon?

In 2020, members of the populist group #TimberUnity flooded the streets of Salem blaring air horns from big rig trucks. They were rallying at the state Capitol to protest a cap-and-trade climate bill. Many of the group’s members, which included Republican legislators, felt that rural communities were overlooked in climate legislation forged by the Democratic majority.

While some residents and businesses would have received so-called carve-outs, which exempted them from increased fuel costs, Todd Stoffel, a trucker and the vice president of the Timber Unity Association, was concerned about those who would have to pay more.

“The people that didn’t get carve-outs, the cost of it is going to fall on their backs. And dumping more stuff on the backs of the taxpayer is not right,” Stoffel said during a 2020 interview on Oregon Public Broadcasting’s Think Out Loud.

The Republican walkouts effectively killed the climate bills by depriving the Senate of a quorum and preventing votes the opponents were nearly certain to lose. One of those lawmakers was Republican state Rep. David Brock Smith from Oregon’s southwest coast. Brock Smith was the minority representative on the Legislature’s carbon-reduction committee. Today, he’s still concerned rural Oregonians would shoulder the biggest financial burden of a cap-and-trade law as more expensive fuel drives up prices for groceries and other commodities.

“So that apple in Brookings would be more expensive to buy than it would be in Portland, just for the basic fact that it’s farther away,” he said.

“The proponents of the bill never put pen to paper on where those jobs were going to come from, where these investments in rural Oregon were going to go,” he said.

Even after two years of legislation and months of debate, Oregon’s cap-and-trade proposals could not achieve one of the key aspects of British Columbia’s success — bringing business interests and rural residents on board.

“By now, we have a bunch of studies that have shown that it didn’t hurt British Columbia’s economy, it wasn’t regressive, which is often a concern, and it did reduce emissions below what they would have been otherwise,” said Kathryn Harrison, a professor of political science at the University of British Columbia who has written about British Columbia’s carbon-tax program and currently is writing a book about carbon taxes.

So, what is preventing carbon-pricing proponents from winning enough support in Oregon?

Carbon taxes and cap-and-trade programs are different ways to put a price on greenhouse gas pollution. Both are meant to reduce emissions by forcing polluters to pay more for the waste they create.

Washington state tried and failed — twice — to pass a carbon tax by voter initiative. There are currently no U.S. states with a carbon tax.

Cap-and-trade programs are being used by the European Union, as well as by a consortium of 11 East Coast states. California also has a functioning cap-and-trade system, and the Washington Legislature enacted one this spring.

In Oregon, Democratic lawmakers tried their own cap-and-trade plans in 2019 and 2020.

Basically, cap-and-trade programs set a limit on how much pollution can be released in the state annually. Industries get allowances for how much they can pollute. If they want or need to pollute more, they are forced to buy allowances from other industries that are emitting less.

Over time, the level of pollution allowed in the state would be reduced and force industries to clean up their businesses.

“Like a lot of bills, it put a price on carbon and, therefore, offered a market incentive for reducing emissions and a trading mechanism for selling them,” said Oregon Sen. Jeff Golden, who worked on the 2019 legislation.

The average Oregonian would feel the impact when businesses passed their costs along to consumers — at the gas pump, for instance. State forecasts from 2019 estimated Oregonians would pay 22 cents more per gallon of gas in 2021, and that amount would increase in subsequent years. The expectation is that more expensive gas will motivate people to adopt more fuel-efficient, less polluting vehicles.

Unlike Oregon, which pursued cap and trade, British Columbia opted for a simpler carbon-pricing program.

In 2008, conservatives proposed a carbon tax that applied to almost all fossil fuels in the province, including gas, diesel, natural gas and even coal used by power plants.

According to Harrison, the University of British Columbia political scientist, the B.C. business sector didn’t fight the tax because it applied equally to business and individuals.

“One of their conditions for not fighting a carbon tax was that it be applied broadly across the economy with the same price applying to everyone,” Harrison said.

The other big appeal for British Columbians was that the carbon tax was revenue neutral. Whatever people paid in carbon taxes, they paid less in income taxes, corporate taxes or business taxes.

“It’s designed to increase taxes on bad things, in particular, carbon pollution, and reduce other taxes,” said George Hoberg, professor of public policy at the University of British Columbia. “So, businesses actually got as much or, in some cases, more money back than they spent on the carbon tax, and so did individuals.”

Research also has shown that rural communities in British Columbia not only were made whole by the program’s tax cuts, but benefited more from them than did their urban counterparts. A 2016 article in the journal Ecological Economics describes a “myth of unfairness,” which asserts that benefits created for rural residents in northern interior British Columbia “overcompensated rural households, such that these households are net beneficiaries from the carbon tax. …”

“So, in fact, it was a misperception that the carbon tax, in British Columbia’s case, was costing rural residents more,” Harrison said.

Both Harrison and Hoberg acknowledge the carbon tax was not universally liked. Conservative politicians in British Columbia suffered politically after it passed. Starting in 2013, lawmakers froze the carbon tax, preventing it from increasing for five years. But still, both professors said, it has made a difference. While British Columbia hasn’t met its overall greenhouse gas reduction goals, the carbon tax has likely slowed the increase of emissions.

In Oregon, Democrats made concessions for how rural residents would be affected by cap and trade. For example, the 2020 bill offered funding to help truckers convert to lower-emission fuels. Setting gas prices regionally also meant residents in Oregon’s largely rural east side wouldn’t see fuel increases at all. And there were tax credits designed to increase benefits to rural communities and offset gas costs for low-income residents around the state.

Looking back, Golden, the state senator, said the cap-and-trade bill’s downfall may have been its complexity, which made it vulnerable to misinformation.

“The more details, the more twists and turns and bells and whistles, the more opportunities there are to distort it,” Golden said.

In contrast, a carbon tax like British Columbia’s is relatively simple.

This year, Oregon’s Democrats are proposing scaled-back climate legislation, partly in hopes of avoiding more protests from Republicans. While cap-and-trade legislation is off the table for 2021, two bills being debated would create different policies to decarbonize Oregon’s electric grid by transitioning to 100% emission-free electricity by either 2040 or 2050.

Critics of Oregon’s climate bills argue the state’s relatively low emissions in the face of overall global climate change make any carbon-pricing program inconsequential and not worth the economic costs.

But Harrison at the University of British Columbia said when neighboring jurisdictions create their own carbon-pricing programs, it builds political momentum and helps expand the impact of such programs. Today in Canada, all the provinces and territories have their own carbon-pricing program or follow a federal “backstop”’ requirement to limit emissions.

In Washington state, lawmakers passed their own cap-and-trade program after partisan debate in April. With California’s carbon market and British Columbia’s carbon tax, Oregon is the lone West Coast holdout.

The stakes of these bills and the costs of opponents sabotaging them are high, Harrison said.

“If they believe climate change is real, and God knows scientists are well convinced of that,” she asked, “do they really want to score cheap points at the expense of future generations?”