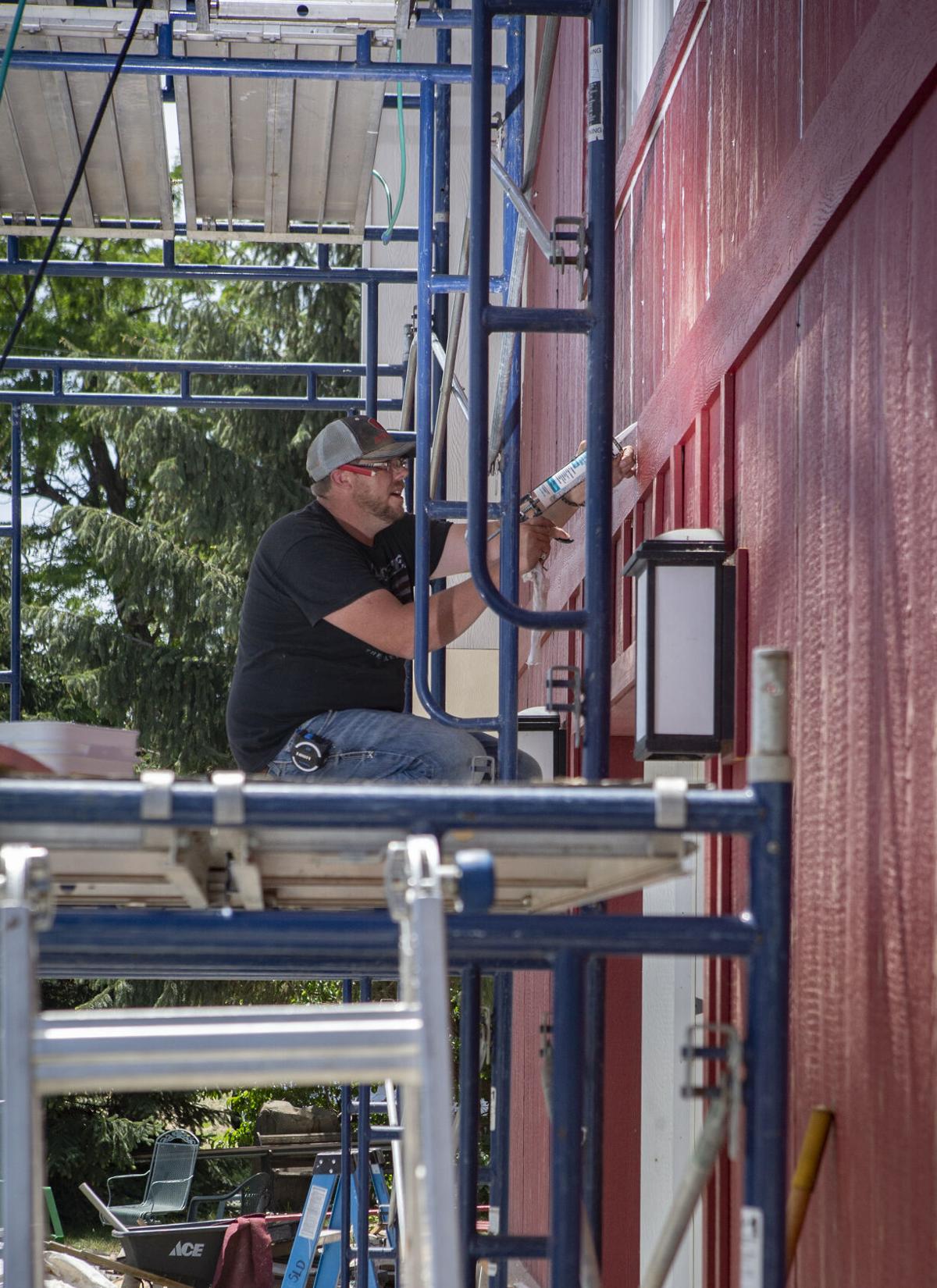 Travis Hamman caulks a joint on a housing project in Stanfield on Wednesday, June 3, 2020. Hamman, who has been back to work since early June, said he has yet to receive nine weeks of compensation for an unemployment claim he filed four months ago. 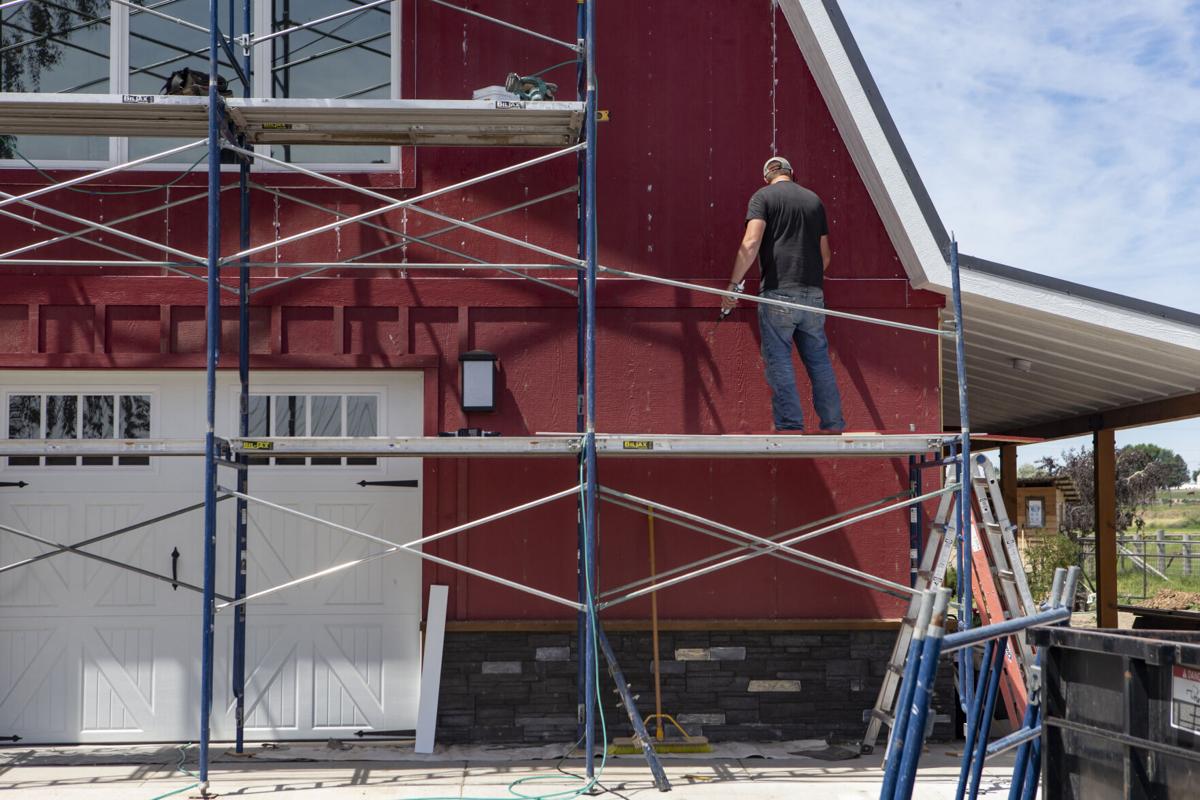 Travis Hamman caulks seams on a house he was working on in Stanfield on Wednesday, June 3, 2020. Despite having filed for unemployment four months ago, Hamman said he is still waiting on nine weeks of compensation.

Travis Hamman caulks a joint on a housing project in Stanfield on Wednesday, June 3, 2020. Hamman, who has been back to work since early June, said he has yet to receive nine weeks of compensation for an unemployment claim he filed four months ago.

Travis Hamman caulks seams on a house he was working on in Stanfield on Wednesday, June 3, 2020. Despite having filed for unemployment four months ago, Hamman said he is still waiting on nine weeks of compensation.

UMATILLA COUNTY — Four months after filing for unemployment, Travis Hamman said he is still waiting for nine weeks worth of compensation.

The Pendleton resident said as time goes on, his need for that unemployment compensation increases. Hamman said his truck, which he needs to conduct his business, is at risk of being repossessed.

“I just received an email from Reliable Credit who financed my truck stating if I didn’t pay them the $1,700 owed to them within seven days they will repossess my truck,” he said.

It’s been months since thousands of Umatilla County residents filed for unemployment benefits as a result of COVID-19. Some say they still haven’t received any money, while others just received months of unprocessed payments as of last week.

Hamman applied for unemployment toward the end of March and still has not received his unemployment benefits, which is nine weeks of benefits for a total of $8,000.

Hamman stopped applying for unemployment in the middle of June once he was able to start up work again. However, he said people are canceling on projects and work is currently unreliable in terms of frequency and pay. Hamman said that this pays some of the bills, but he still needs his past unprocessed weekly claim payments.

“I have told them I am trying to get back on track from not getting my unemployment that is owed to me,” he said. “I have been back to work for almost two months, however, it started out slow and I am having to play catch-up with all of my bills.”

Hamman said he hopes he gets his unemployment processed as soon as possible so he can get his payments back on track.

Ariane Holm Le Chevallier, a communication advisor and representative at the employment department, said in an email that due to the high volume of applications they are still working on processing applications received prior to June 21.

“We are cautiously optimistic that we will be able to work through remaining claims by August 8,” she stated.

According to data from the unemployment office, as of July 23, a total of 527,100 claims received between March 15 and July 11 were processed in the state of Oregon, and approximately 99% of claims to date have been processed. Approximately 1,108 claims still need to be processed.

Renee Bousquet of Hermiston said she racked up 14 weeks of unprocessed unemployment weekly claims before she received a response from the Oregon Employment Department.

“It took 14 weeks of no information; no one can tell me anything,” she said.

Shortly after, the unemployment office got in contact with her, and once they received the missing information of why she was let go during the start of the pandemic, they were able to deposit unemployment compensation for 11 out of the 14 unprocessed weeks.

“It took a long time for (the unemployment department) to get their stuff together, but they are getting it together,” she said. “At least, it worked for me.”

Pandemic Unemployment Assistance is available for those who before the pandemic would not have qualified for unemployment benefits, such as those who are self-employed.

Le Chevallier stated that for those who still need to apply for Pandemic Unemployment Assistance, they should expect to wait for at least six weeks from when their initial claim is submitted. The Employment Department launched a new PUA form that will significantly speed up the process, according to Le Chevallier.

Currently, the unemployment rate in Oregon has fallen to 11.2% as of June, from 14.6% in March. In Umatilla County, as of May, a total of 2,362 residents remain unemployed.

The Federal Pandemic Unemployment Compensation program, which provides an additional $600 a week in unemployment, expired on Saturday, July 25. When asked how it will affect her, Bousquet said for her personally, her husband receives supplementary income, so it won’t affect her as much as others who are sole providers, but that she speculates it will be a significant cut for those who are still unemployed.

“For most people, the payment from the pandemic program is more than you’ll receive from the unemployment check,” she said. “For anybody who may be the sole provider, it’s a dramatic cut.”

White House, Democrats at odds on virus aid but talking

WASHINGTON (AP) — Unemployment assistance, eviction protections and other relief for millions of Americans are at stake as White House officia…