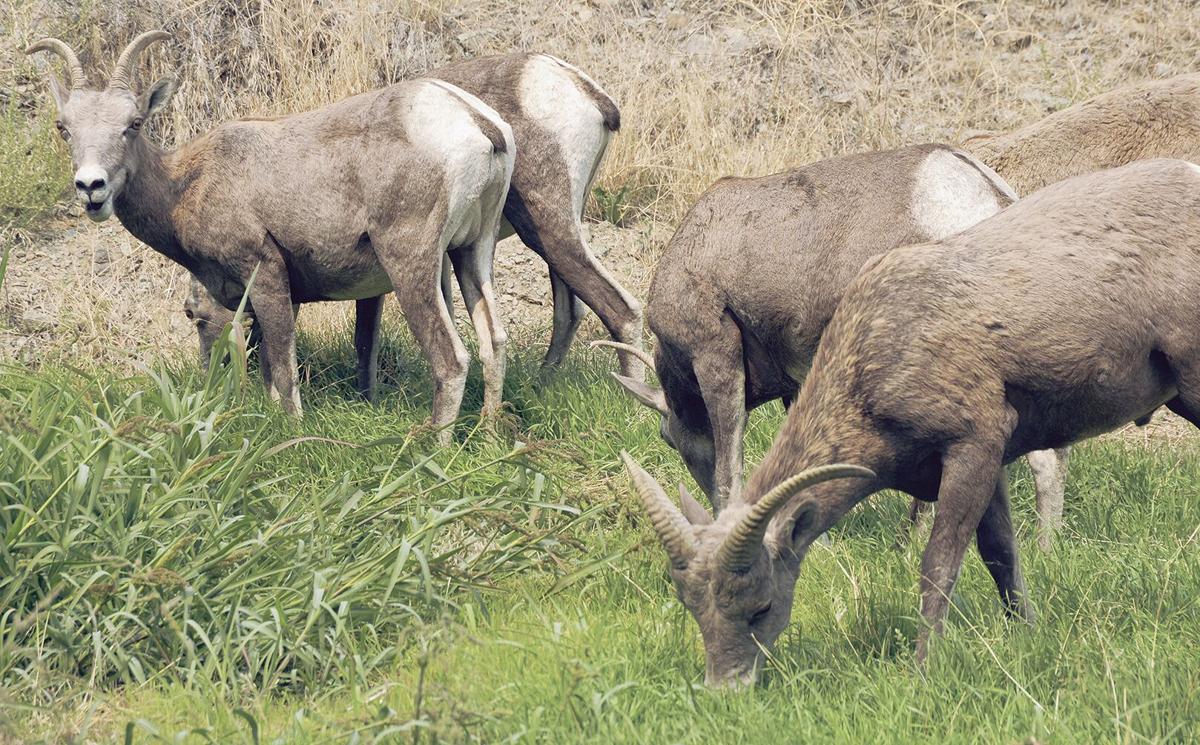 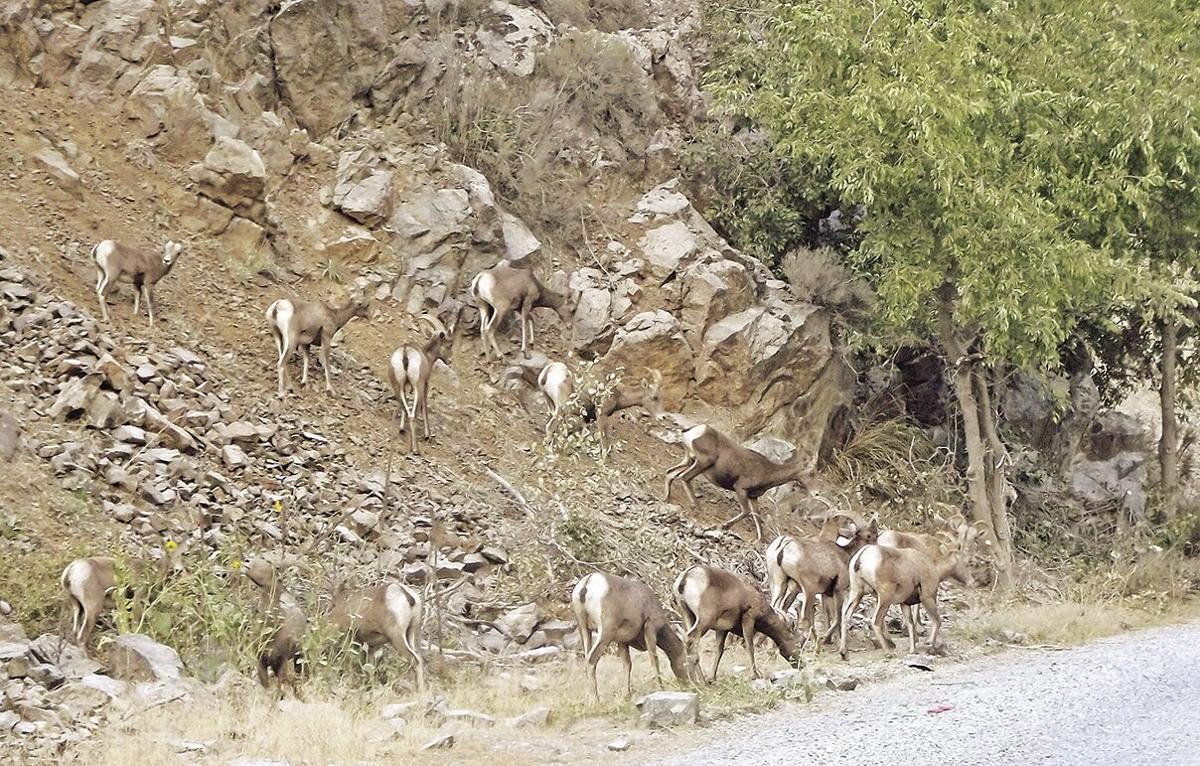 Bighorn sheep beside the Burnt River Canyon Road between Bridgeport and Durkee in this photo from 2009.

Bighorn sheep beside the Burnt River Canyon Road between Bridgeport and Durkee in this photo from 2009.

BAKER CITY — Eight months after a bacterial illness was confirmed to be spreading through one of Baker County’s two herds of bighorn sheep, animals in the other herd are also getting sick and, in a few cases, dying.

The newest outbreak of pneumonia is affecting sheep in the Burnt River Canyon herd.

That’s the smaller of the county’s two groups of bighorns, consisting of about 85 sheep, said Brian Ratliff, district wildlife biologist at the Oregon Department of Fish and Wildlife’s Baker City office.

The Burnt River Canyon sheep range mainly in the deep, steep and exceedingly rugged canyon between Bridgeport and Durkee. The canyon is about 20 miles southeast of Baker City.

Bighorns were extirpated from the area early in the 20th century, but ODFW reintroduced the animals in the canyon in 1987, releasing nine ewes, four lambs, and two rams that were caught from the Leslie Gulch herd along Owyhee Reservoir in Malheur County.

ODFW released more bighorns in the canyon in 1997.

In the past two weeks, since a driver on the Burnt River Canyon Road reported seeing a sick bighorn near the road, at least three sheep from the canyon herd have died, Ratliff said.

An area resident found a dead ewe on the road, one lamb was found dead, and Ratliff said ODFW employees euthanized another lamb that was ill.

He sent tissue samples from all three sheep to a diagnostic lab at Pullman, Washington, to determine the source of the pneumonia.

Ratliff said many infectious agents can cause pneumonia in bighorn sheep, including multiple types of strains of viruses and bacteria — and even dust if a sheep is already in poor health.

Ratliff said he has received results from one bighorn, but those were inconclusive.

He’s awaiting results from the two other sheep.

Ratliff said his most recent trip to the Burnt River Canyon, on Oct. 20, yielded some reason for optimism about the herd’s future.

His goal was to find a ewe that is fitted with a GPS collar, allowing biologists to track its movements.

Ratliff said he watched the ewe and its lamb, born this spring, and both were in “very poor” body condition.

The ewe also coughed repeatedly, as sheep almost always do when they have pneumonia.

Both the ewe and the lamb were foraging, however, Ratliff said, and he decided not to euthanize the animals to obtain additional samples for testing.

The more promising part of the trip was the group of 11 bighorns that were within 2,000 yards or so of the ailing ewe and lamb.

Ratliff said all 11 of those sheep appeared healthy.

“That’s a good sign, that we don’t have a lot of individuals showing up with (the sickness),” he said.

Based on the proximity of the 11 sheep to the ailing ewe and lamb, it’s likely that the two groups have been in contact, Ratliff said.

Some types of viruses and bacteria that can cause pneumonia are extremely infectious, such that most sheep in any infected herd are likely to get sick, he said. Others are less infectious and less likely to kill sheep.

“If we’re lucky this won’t be one of those types that races through the population,” Ratliff said.

Determining the precise cause of the pneumonia is vital, Ratliff said, and not only because the confirmation will give biologists a better sense of how virulent this outbreak is likely to be.

The lab results also might help biologists figure out whether the Burnt River Canyon bighorns were infected by mingling with bighorns from the Lookout Mountain herd as opposed to other possible sources of infection, including domestic livestock.

ODFW received a report in February of a dead bighorn ram from the Lookout Mountain herd lying on the Snake River Road near Connor Creek, about 18 miles north of Huntington.

Ratliff said a lab test of tissue samples from that ram confirmed the animal had been infected with a strain of Mycoplasma ovipneumoniae bacteria that had not been found before in bighorns in Oregon.

There are more than 50 strains of that bacteria, and they have varying levels of lethality.

The test results prompted ODFW to cancel the two bighorn hunts scheduled this summer and fall in the Lookout Mountain unit. At least a dozen bighorns have died in that area.

(ODFW sells one hunting tag per year for a ram in the Burnt River Canyon herd.)

Ratliff said it’s not clear where this strain of bacteria falls on the lethality scale.

He said there is little evidence that Burnt River bighorns, which are of the California subspecies, mingle much, if at all, with Lookout Mountain sheep, which are the larger Rocky Mountain subspecies.

Both subspecies are vulnerable to pneumonia from both viral and bacterial infections, Ratliff said.

Despite the herds being separated, in early summer two young bighorn rams, both of the California subspecies and from the Burnt River Canyon herd, tried to cross Interstate 84 from the south side (Burnt River), to the north side (Lookout Mountain), he said. One of the rams was hit by a car and killed.

Ratliff said a tissue sample from that sheep was tested, and the animal was not infected with the bacteria found in Lookout Mountain sheep.

The second ram was not found.

He said young rams are more likely than other bighorns to roam away from a herd.