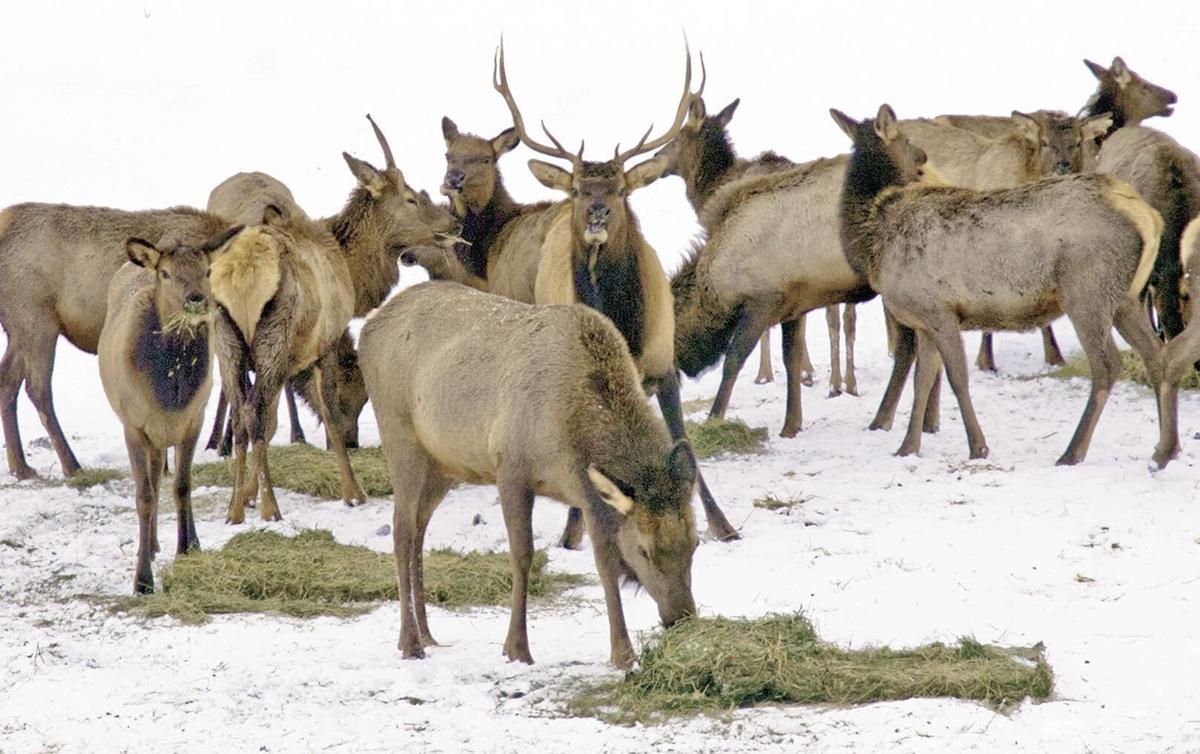 Rocky Mountain elk munch alfalfa at the Elkhorn Wildlife Area during a past winter. 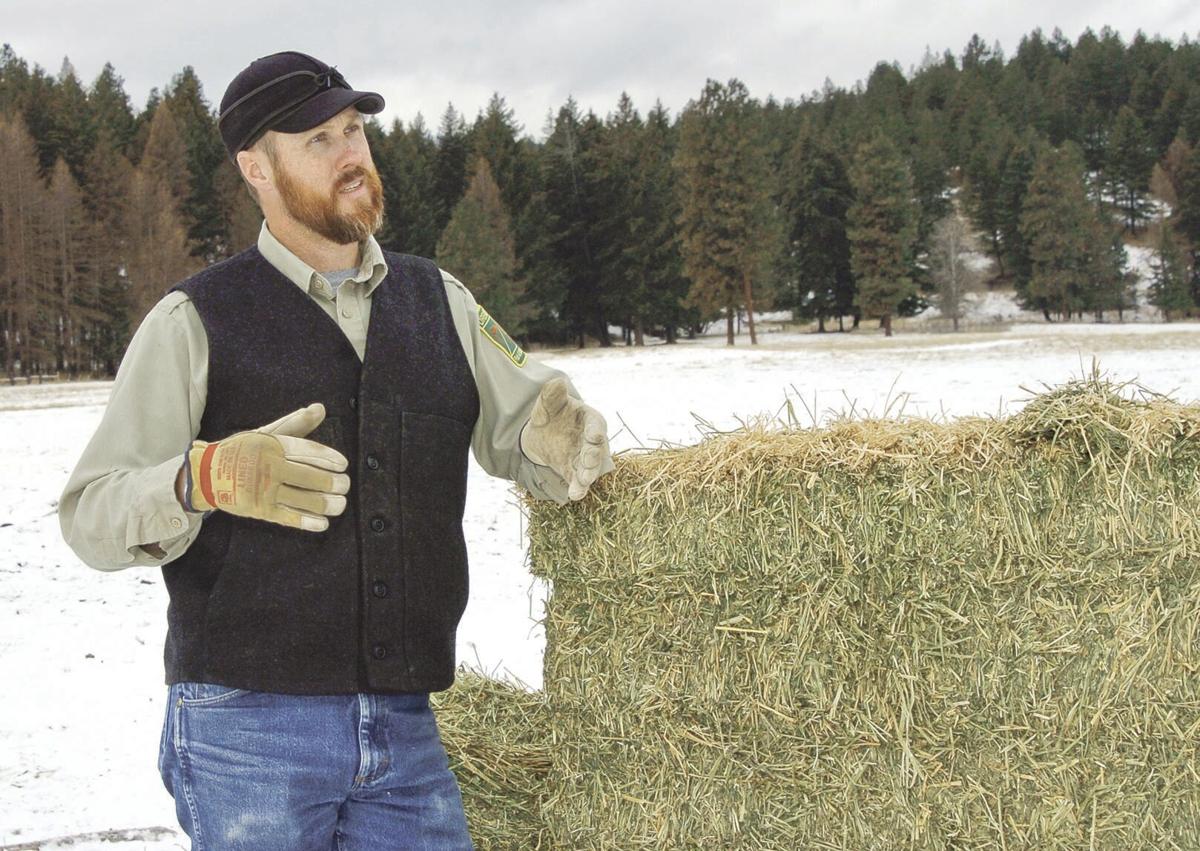 Dan Marvin, photographed here in December 2018, is starting his third winter as manager of the Elkhorn Wildlife Area, a network of elk-feeding stations.

Rocky Mountain elk munch alfalfa at the Elkhorn Wildlife Area during a past winter.

Dan Marvin, photographed here in December 2018, is starting his third winter as manager of the Elkhorn Wildlife Area, a network of elk-feeding stations.

Marvin knows how tough these animals are.

During winters when sub-zero temperatures and snowdrifts deep enough to bury cars conspire to kill hundreds of mule deer in Northeast Oregon, most of the elk make it through, a bit undernourished, maybe, but otherwise hale.

Yet, Marvin finds it amusing that when a couple of snowstorms arrive earlier than usual, while jack-o-lanterns still sit on some porches, the elk turn up, looking for a free meal.

“Acting like they’re going to starve to death,” Marvin said.

Marvin can laugh because the storms that brought a couple of feet of snow to the mountains the first half of November didn’t actually imperil the elk.

Yet, the animals have become so accustomed to Marvin and his crew doling out alfalfa when the snow lies deep, that sometimes they arrive before he’s ready to start bucking bales.

This was one of those years, said Marvin, who’s starting his third winter as manager of the Oregon Department of Fish and Wildlife’s Elkhorn Wildlife Area.

The state started the project in 1971, and Marvin, who has worked for ODFW since 2005, is just the third full-time manager.

ODFW created the Elkhorn Wildlife Area to feed elk and deer each winter, but the impetus is not what it might seem.

The project’s purpose isn’t to spare animals from starvation, but rather to keep them from munching hay that cattle ranchers in the Baker, Bowen and North Powder valleys put up each summer to feed their herds.

Because the Elkhorns lack a foothill zone where elk and deer can find sufficient natural forage during winter, the animals adapted to treat the valleys as their winter range.

But once farmers and ranchers began settling in those valleys in the second half of the 19th century, the conflict between their operations, and the hungry wild animals, was all but inevitable.

The wildlife area consists of 10 sites along the base of the Elkhorn Mountains, ranging from Auburn at the south end to Shaw Mountain northwest of North Powder.

Marvin said he doesn’t start setting out alfalfa until after Dec. 1, regardless of early storms.

That’s because the wildlife area’s sites are open to the public, including elk hunters, until that date.

“We don’t want to create a baiting situation,” he said.

The elk, in any case, didn’t loiter long after the early November tempests.

Once more typical mid-autumn weather returned, and some of the snow melted, the elk drifted back into the mountains, Marvin said.

After the wildlife area closed to the public on Dec. 1, small herds of elk showed up, but interest among the animals was “kind of hit or miss,” he said.

But when wintry weather resumed the second week of December, the elk began their seasonal migration, and this time in larger numbers, to the feeding sites.

“They know where the hay sheds are at,” Marvin said.

Significant numbers of elk arrived the weekend of Dec. 12-13, with close to 300 head at the Auburn site and 100 to 150 at the Anthony Creek site near the wildlife area headquarters, about 10 miles west of North Powder.

Those numbers are pretty typical for early winter, Marvin said.

Come January 2021, unless the winter is abnormally mild, the wildlife area crew likely will be feeding about 500 elk at Auburn and 250 at Anthony Creek.

Numbers vary at the other sites, some of which also attract deer.

The Auburn and Anthony Creek sites are the two publicly accessible properties with maintained roads where people can park and watch the big herds of elk, which usually include multiple mature, branch-antlered bulls.

To get to the Auburn site, drive south of Baker City on Highway 7 for about 7 miles, and turn right on Old Auburn Lane. Follow this gravel road (maintained in winter) for about 3.5 miles where a sign marks the wildlife area. The elk are fed on a knoll south of the road.

To reach the Anthony Creek site, from North Powder drive west on River Lane for about 8.5 miles. The elk are fed in a meadow south of the road. You can also reach River Lane via Haines and the Anthony Lakes Highway.